Even during a pandemic, training in Guam doesn't stop

Even during a pandemic, training in Guam doesn't stop

They emerge from the 6-foot-high sword grass, one by one, carrying carbine paintball guns and wearing vastly different uniforms. Army Command Sgt. Maj. Celso Leonen, the commandant of the Guam National Guard's 203rd Regional Training Institute, must suppress his urge to make uniformity corrections — for now.

This is a joint exercise between the Guam National Guard's Officer Candidate School, and the University of Guam's ROTC programs. As distinct commissioning sources, the two programs traditionally have separate curricula, training events and uniforms.

Due to restrictions imposed by the COVID-19 pandemic, however, the normal training events in the mainland United States have been postponed for both OCS and ROTC.

"This doesn't mean we just walk away from our obligations," Leonen said. "The training doesn't just stop. These are our future leaders, and we owe it to them to give them the best training possible." 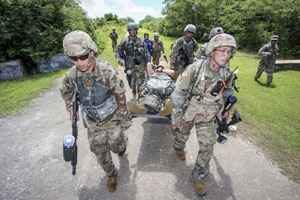 Under the leadership of Army Lt. Col. Jumar Castro, the commander of the 203rd Regional Training Institute, Leonen and the institute staff worked with the University of Guam ROTC program to combine resources and offer realistic and valuable training. The weeklong training, which took place in the stifling heat of Guam's tropical savanna, included tactical movements, communications and reports, conducting ambushes, reacting to contact, calling for artillery fire, calling for medical evacuation and more.

In the culminating training event, the trainees called for a live medical evacuation and were treated to a cool ride in a Guam National Guard UH-72 Lakota helicopter. 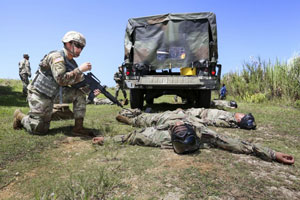 Army Officer Candidate Steven Cruz, the acting squad leader for the trainees, offered his thoughts on the combined training.

"We come out to the field, and we get missions done as a team," Cruz said. "We have OCS here with our ROTC brothers and sisters, and we're in this fight together. We train to fight, we train to win, and we cannot lose."

Naval Base Guam to conduct Command Assessment of Readiness and Training