by Anne Jing Ping Wen
Stripes Guam
Email
Print
Reddit
Tweet
Share
Pinterest
More
“Aiyooo, not like that. Like this,” my father grumbles. “Ok, ok,” I reply.
As the sweat seeps through my father’s old island T-shirt, I look up at the contours of a distressed face. The heat is piercing, and I can hear my father heave another sigh, performing his daily routine. Years of hard work are revealed in my father’s strong, but coarse hands. The tired but gleaming eyes move from mortar to brick, rhythmically sticking “glue” to pieces of concrete block. “Hurry up, no time,” my father says in Cantonese.
As an American-Born-Chinese from the island of Guam, I grew up with a Confucian father. In accordance with his traditional values, men are to carry on the family lineage, destined to accomplish great things in the future. Women are to develop beauty and compassion for an arranged marriage. Reproduce, start a family, and generate money. Now that’s practical!
In my house, I am the eldest of two. When I was conceived in my mother’s stomach, ultrasounds showed my parents I was a girl. Despite the scientific evidence and the words of my doctor, my father remained hopeful, longing for a young boy. Speaking in Mandarin, my mother said, “Your father didn’t believe in science. He kept thinking magic would happen.” Luckily, our gynecologist was not mistaken: I was a girl. My father did not give up, and three years later, prayed for another young boy. As usual, the odds were not in his favor as my sister wiggled her way into a Confucian household. And with her birth marked a new chapter in my father’s philosophy, for he began raising my sister and I as young boys.
My sister and I were taught a myriad of “manly” labor: fixing air-cons, plumbing toilets, and sawing wooden boards. “You will save a lot of money and impress your future in-laws,” my father always said. At a young age, I was instructed to sort nails and screws. As I grew older, my tasks upgraded to measure planks of wood and hammer long nails. When I complained of boredom or tiredness, my sister and I watched as my father pulled wires and connected circuits. Once, in third grade, I asked my father to explain the technicalities of wires. By the time he finished drawing his extensive diagram, I had fallen asleep. The short nap recurred numerous times, especially when my father uses jargon unheard of in my vocabulary. Aside from the detailed explanations, my father also trained my sister and I to carry concrete blocks. From the second floor of my mother’s spa, we were to channel our inner energy, quickly step up the flight of stairs, and neatly stack heavy blocks on the first floor. “Hurry up, no time,” my father hustled.
In my house, English is not English. There is no difference between CIO and CEO, which was why at my English class, people made fun of me for aspiring to become a business CIO. Due to my parent’s lack of exposure to English, I pronounced thank you as shank you and Berkeley as book-a-lee. Our tongues failed to curl at the right times, and the w’s were replaced by v’s. “Your velcome,” my father always said. Like countless immigrants before them, my parents never graduated high school, and consequently, see education as a vehicle for social mobility. However, with only a grade school education, my father was left to his own creativity.
As Father’s Day approaches, I am reminded of my father’s guidance. I think of all his sacrifices—how he left behind his brothers and sisters, how he struggled to learn a new language in a different country, and how he sacrificed so much to give my sister and me a life better than the one he had. Despite the odds stacked against him, my father scrimped and sacrificed every necessary means possible to provide for what it takes to be an American teenager, even if we live on the fringe of Americana. If not for his risk-taking, if not for his belief in the American Dream, I would not be in the position I am today—an American Born-Chinese teenager applying to college. 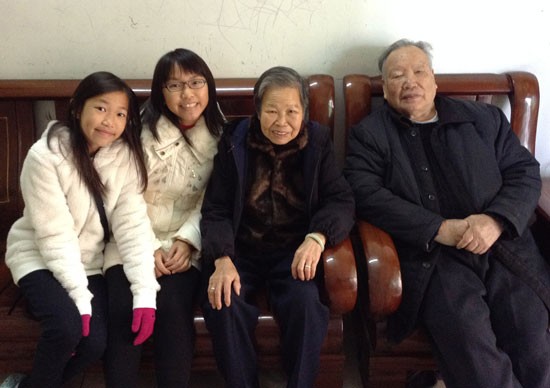 From left to right: My sister (Olivia Wen), me, my grandma, nad my granpa

CNMI not being lowballed