The collaboration between the two organizations began a few years ago as simply an idea to provide additional sporting opportunities for the community.

For GFA President Tino San Gil, one encounter with a parent a few years back fully set the wheels in motion for the partnership.

“I was in the GFA office one day and a parent approached me and said, Tino, come out with me to the parking lot – and there, in the parking lot, was her son, who had a disability, outside the fence looking in watching other kids play,” said San Gil, trying to hold back tears. “She said, ‘he wants to play, what can you do for my kid to play?’ The scene and conversation has stayed with me, and when my brother Sam told me that Special Olympics Guam wanted to start a project with GFA, I didn’t hesitate.

“We owe it to our community, all of our kids, and as of today, as soon as I sign this MOA, there is no more fence at GFA,” San Gil added. 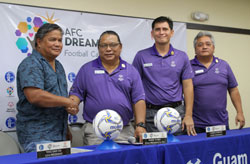 “This collaboration between Special Olympics Guam and Guam Football Association started some five, six years ago at a coffee shop with Tino and other GFA board members,” Florig said. “Just hearing Tino’s vision about being able to extend the organization’s services to Special Olympics Guam, it’s taken that time to make sure all of our T’s were crossed and I’s dotted. In recent years, Special Olympics has been promoting its ‘Inclusion Revolution’ a global movement celebrating all abilities, and this partnership with GFA is a perfect fit.

“I’d like to thank Guam Football Association for this opportunity for our athletes and volunteers, as well as FIFA and AFC – not only for sharing their knowledge of the sport with our athletes, but also by extending financial support for the program, as well as assisting GFA build this great facility in Guam,” Florig added.

The project will receive $5,000 in funds from AFC’s Dream Asia Football Cares program from the international organization’s Social Responsibility sector. The funds will cover operational expenses, equipment, and event shirts, among other expenses.

“This is a very exciting day and a very exciting partnership that we’re heading into with GFA,” said Camilo Lorenzo, Special Olympics Guam Chairman of the Board. “It’s something that will benefit our athletes; it’ll be an additional sport to what we already provide throughout the year. 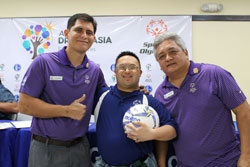 SOGU has a total of six sporting programs for the year: Athletics (Track and Field),Swimming, Unified Bowling, Unified Badminton, Unified Softball and beginning this fall season, Unified Soccer. This sport event will cultivate, support and enrich the development of Unified Soccer on island for persons with or without disabilities, according to a media release by Special Olympics Guam.

Athletes registered will begin weekly training sessions at GFA with coaches Oct. 5 and every Saturday to Nov. 23, coinciding with weekly matches of the Triple J Auto Group Robbie Webber Youth Soccer League. On Nov. 30, the athletes will take part in a GFA-Special Olympics Guam Jamboree event at GFA.

“One of our new missions is inclusion, and we’re promoting this through unified sports,” said Paul Mendiola, Special Olympics Guam board member and National Sports Director. “Unified sports is not just about the athletes participating, but to be included throughout the yearlong process of joining a team and being part of the team’s activities. It’s our hope that when these athletes start to train, they not only train prior to an event, but year round.

“How we can accomplish this is by partnering with an organization like GFA and their members, with athletes continuing to participate in their events and activities during the year. I’m very grateful for this partnership,” Mendiola added.

Okeanos Marianas canoe to arrive in Rota and Guam on Sunday