The Guam Liberation Festival commemorates the U.S. military liberating the island from Japanese occupation on July 21, 1944. Every year to mark the important date, the island celebrates with events including a fair/carnival, lectures on history, night market and more.

The culmination of the events is on July 21 when the Liberation Day Parade will be held along Marine Corp Drive from the Governor’s Complex to the Chief Quipuha loop.

This year’s theme for celebration is “A Legacy of Peace and Friendship.” The Guam Island Fair/Liberation Carnival is open nightly until as late as midnight on weekdays and until 2 a.m. on weekends. The festival features many vendors offering various games, food and carnival rides at the Pasco Sports Complex/Hagatna Boat Basin area, adjacent to the Chamorro Village. There is no admission fee.

Besides the festival, the night market will run every Wednesday as customary inside Chamorro Village.

According to Krystal Paco, spokesperson for the Office of the Governor of Guam, those visiting Chamorro Village on Wednesday, should also check out the Liberation Carnival that is running concurrently.

“If visitors go toward the hut village and the back parking lot, they will find games, vendors, two music stages and rides for younger children,” Paco said. “On Sundays, there is musical entertainment and a 9 p.m. fireworks show.”

Regina Gloria M. Duenas from the village of Santa Rita was announced as the 75th Liberation Queen.  During her reign, Duenas will represent Guam in numerous events and functions throughout the year.

The carnival generates revenue from concession fees which is used to help offset the costs of memorials, prayer services, fireworks, special events and the annual parade – the largest island-wide event on Liberation Day.

Liberation Day is the island’s most important holiday aside from Discovery Day (the first Monday in March). 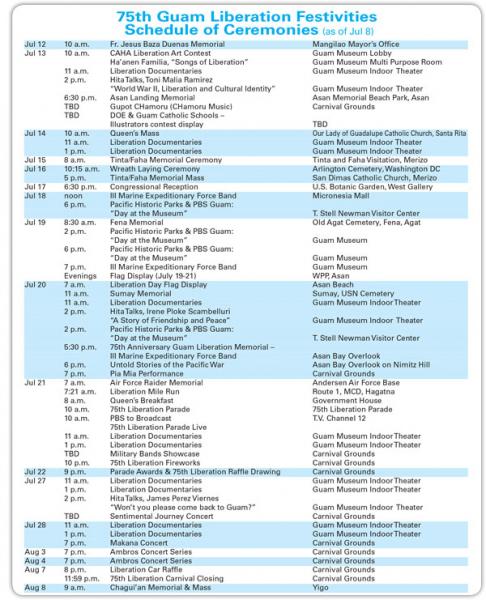