SANTA RITA, Guam (Nov. 19, 2020) – A vibrant mural emblazoned with the Chamorro greeting, “Hafa Adai,” and depictions of the island are now featured along the walls of Clipper Landing restaurant on U.S. Naval Base Guam (NBG).

During three weeks of outlining and painting, artist and Umatac resident Ben Quinata returned to old stomping grounds and left his mark at the establishment overlooking Sumay Marina.

A portion of the mural is a 26-by-9 foot large fishing hook seal, resembling the Guam seal, but with Quinata’s personal artistic touches including two men sailing in the painted proa and the hook seal flanked by red hibiscus flowers. 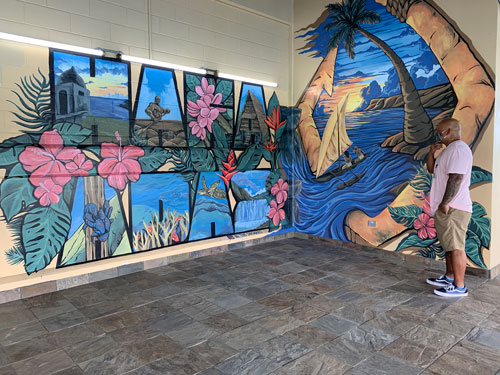 Another portion of the wall is a 7-by-16 foot mural of the words “Hafa Adai” with each letter from the words representing a different depiction of the island including images of Chief Gadao of Inarajan, the view of Ft. Soledad overlooking Umatac Bay, an ancient CHamoru hut, and pink plumeria blossoms.

“I love the flow … you want to be able to have the viewer led through the entire piece so they take in the entire painting which is hard when you’re dealing with such a large area that is cornered,” Quinata said.

Spaddy said the painting will be an ideal place for patrons to take some photos when the restaurant reopens. A reopening date will be announced soon.

“All of us here love the mural and when we have the restaurant fully operational, it will be wonderful to see our patrons come and take photos in front of the amazing artwork – it’s really here for them to enjoy,” Spaddy said.

Quinata attended University of Guam (UOG) and attributes much of what he has learned in art to his former professor and local artist, the late Jose “Joe” Babauta.

“He was responsible for a lot of the murals in the area, his class taught us how to source material, the steps, and break down,” Quinata said. “The mural by Price Elementary (school) with the coconut crabs – that was created by his students.”

Quinata is no stranger to working at NBG. Aside from working as a bagger at the Orote Commissary in his younger years, one of his first jobs in high school was working at the Navy Exchange as a Visual Merchandiser at the old Toy Land.

“My high school Art Teacher got me that job at the old Toy Land warehouse,” Quinata said. “At 16, I was doing huge Disney character displays, creating and decorating.”

Quinata has other ties to the Navy, as his father the late Jose M. Quinata retired after 23 years in the Navy and also went onto working for Personnel Support Detachment Guam for another 16 years.

“When I first saw Ben’s work, I was in complete awe of the mural,” said NBG Commanding Officer Capt. Jeffrey Grimes. “He is so incredibly talented and I appreciate that he could share his work here at Naval Base Guam for those who live and work here to appreciate it as well. I know this isn’t the last of his work that we’ll be seeing here at NBG.”

Base:
Naval Base Guam

Back to Sumay Day to be held on U.S. Naval Base Guam