A look back in Guam's history: Liberators meet the liberated

As the battle for Guam advanced from the beachheads and the concentration camps were liberat-ed, people began traveling from the camps or their jungle hideouts to safety behind the front lines. Above, boys on carabaos and on foot are part of the stream of people fleeing the fighting be-tween the Japanese and American forces. Photos and Illustration courtesy of War in the Pacific National Historic Park

A look back in Guam's history: Liberators meet the liberated

Editor’s Note: The story was first published on the 50th anniversary of the Liberation of Guam.

The Liberation of Guam was a matter of military necessity. Its people and their suffering aside, Guam was seen as a naval and air base from which to bomb Japan and supply the force needed to subdue the enemy.

But in Guam, the Marine in the jungle and the soldier in the trenches discovered something very special - that his effort was recognized and that he actually made a difference in people’s lives.

Marine Cpl. Maury T. Williams, Jr., a reconnaissance scout for the 21st Marines, and Wesley T. Bush, of the 22nd Marines, both recall their experience in meeting Guamanians during the battle to recapture Guam.

For Bush, who wrote to the Guam Veterans Affairs Office asking for information on 50th anniversary activities, he first met with local people when his unit was relieved and he and his fellow Marines were moving back toward more secure areas.

“We had battled continuously for 14 days, then got a rest. As we marched to the rear, we went through an area where the lovely people of Guam had been gathered. The youngsters ran alongside of us holding on to our rifles. Old men held our hands and the women cried and cheered and patted our backs. All the hardship and misery and wounds we had suffered melted away at that moment and I said to myself, ‘It has been worth it all.’ I will never forget how grateful the people were.”

Bush’s unit was to fight in Okinawa but would return to Guam, where he would meet and befriend a local family. Invited to a party by the family, Bush would experience something he never experienced before - tuba, the fermented, and yes, alcoholic product of the coconut tree. The aftermath of the party was predictable.

“I made friends with a family named Cruz. They did my laundry and once, graciously invited us to their humble home, where the father plied us with something called TUBA and we tried to find our way back to camp.”

Williams was also affected by the emotions of the people as they passed his unit in Agana where he and his comrades had been assigned positions. Moving to the rear of the battle, Chamorros would walk past the positions held by Williams and other Marines.

“They (the people) were understandably quite emotional as they approached, considering their months of oppression under the Japanese, and nearly all had tears streaming down their faces. Many were on foot but some came in the trucks that had been dispatched to a pickup point a short distance ahead.”

“But one large group, being brought through the lines in the back end of a six-by-six truck, were singing a song that must have been composed during the occupation. Their words expressed their love of America and Americans, including a line that said something like, ‘Thank you, Uncle Sam.’ I noticed that those people were not the only ones having tears streaming down their cheeks that day,” wrote Williams, the Marine from Memphis.

The siege of Iwo Jima nearly takes a month to complete. The volcanic isle leaves behind a legacy written in blood by the 3rd, 4th, and 5th Marine Divisions: U.S. casualties are 6,800 dead, 20,000 wounded, There are practically no survivors of the 21,000 Japanese defenders.

With American forces nearing the Japanese home islands, the Japanese up the ante at Okinawa. Kamikazes spearhead the defense of the homeland, and nearly 2,000 soar to attack the U.S. fleet supporting the invasion force. It is bloody at battle’s end: 12,500 American troops and 110,000 Japanese dead. 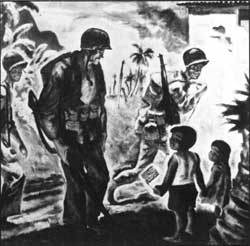 A look back in Guam's history: Sgambelluri’s secret life