Some artists use canvas and paint, others turn to marble or clay, wood or fabric or any of the other myriad materials for their creations. As a young child, Leo Pugram’s choice was what was near at hand – a #2 pencil, ink and paper. Over time his drawings of the flora and fauna of the sea and land that he grew up around on the remote island of Yap in the Federated States of Micronesia began to incorporate more and more complex shapes and geometrics.

Leo had no idea that he might be able to turn his talent into a business. His sketches were for his own pleasure and some were requested by friends for logos, t-shirts and other commercial uses by the island’s small businesses. He never thought of his designs as anything more than simple drawings that he enjoyed putting on paper, often in class when other schoolwork needed to be done.

Then, in 2010 at the age of 27, he ordered a mail order starter kit costing $300 and started experimenting on his own leg with common designs like a skull. At first, the ink washed away. But with practice and concentration, he learned just how deep the needle needed to go, how much ink to use and how to control the tools. And he learned quickly that “drawing on paper was not the same” as drawing on a person’s body, he says.

When his friends heard about Leo’s talent, they began asking for their own tattoos. To gain more practice, he did the work for free with skulls, dragons, roses, scorpions and other familiar images.

His friend, Donald Evans, an American who has lived on Yap for more than 45 years, encouraged Leo’s interest and introduced him to traditional Yapese designs in historical photos and books. Evans also owned one-of-a-kind tools used by Yapese tattooists in the past that he had collected over the years. Leo took them to his cousin who was a carver to make duplicates.

Leo began studying traditional Yapese tribal designs and became interested in preserving the ancient art. He started to bring them back to life, sketching and turning the designs into templates that can be printed on transfer paper to serve as guides during the tattoo process. Adapting some of the designs, he added his own elements, incorporating geometric patterns inspired by the handwoven palm leaf baskets carried by Yapese men and women, sea and land birds, native flowers, a stylized outline of the traditional outrigger canoe, sea turtles, sharks and, manta rays that ply the waters and reef surrounding the 37½ square mile island, and more.

Tribal tattoo art was common for centuries throughout the Pacific islands that are spread across millions of square miles of Oceania. The word “tattoo” is believed to have originated from the Samoan word tatau, meaning "to strike” and is found in other Polynesian cultures throughout the region.  They usually told the bearer’s ancestral history and clan affiliation, their status as warriors, chiefs and other cultural and societal identifiers. Both men and women wore the permanent body decorations and practiced the art of tattoo. In Yap and its Outer Islands, intricate patterns using three distinctive types of tattoos, called Yol, Gachow and Salbachag, designated “high status, expertise in fighting or simply personal preferences,” according to www.visityap.com.

But when European explorers arrived in Micronesia beginning in the 16th century and claimed the islands, they often banned tattoos, removing the islanders’ personal identity in an effort to make them subservient and adopt the ways of the western world. According to anthropologist Lars Krutak (www.larskrutak.com/the-art-of-nature-tattoo-history-of-western-oceania), “...by the beginning of the 19th century, European missionaries began to arrive and they rapidly converted many islanders to their foreign doctrines of religious persuasion. In turn, traditional tattooists were adversely affected, and not only did they lose the motivation to create the incredibly bold skin art of their ancestors, they also were often forced to stop the ‘pagan’ traditions that were once at the very heart of their cultural identities.”

Long before Leo uncovered the designs of his ancestors, there were no more traditional tattoo teachers in Yap.  Leo is the only practicing commercial tattoo artist on the island today.

The design that is requested most often by both visitors and Yapese, is a traditional Yapese design that represents three dolphins racing side by side through the ocean. Reminiscent of a design seen decorating the eaves of some of the men’s houses around the island, it symbolizes the voyaging legends of the Yapese navigators who knew traditional wayfinding that uses the stars, waves, wind, birds and sea life to sail across thousands of miles of ocean in hand-carved canoes.  Myths and legends of the island culture is one that teaches that anyone going into the water with a dolphin tattooed on their leg is thought to be safe from sharks.

Each island developed its own style over the centuries. Leo’s dream was to have a back tattoo like he found in an old photo. That dream came true when he asked Dean Schubert to tattoo a traditional back piece design on his back made up of curving, solid black areas.

In addition to modern equipment and FDA-approved inks, Leo uses the traditional tapping technique for those who request it. Called a “tattooing comb,” the hand-carved, wood, adze-like instrument is fitted at the curved end with rows of twenty to forty needles set tightly together. While one or two assistants hold the skin taut, Leo sits on the floor next to a mat, or a stool next to a tattoo bed table, while his client lies next to him. Bending over with a headlamp lighting the area being tattooed, he first dips the row of needles into a small bowl of ink, then carefully positions them against the lines of the design template that have been applied to the skin before the session. A small mallet is used to rhythmically tap the needles along the guidelines to imprint the ink into the dermas. Historically, these traditional instruments were made of the wing bone of the frigate bird or turtle shell. Ash from burned coconut shells mixed with coconut oil was used in place of today’s specially formulated inks for the staining.

In only eight years, Leo’s award-winning talent has taken him to Chicago’s renowned Field Museum and the University of California in Los Angeles to give talks about traditional Yapese tattoo art. He is included in the World Atlas of Tattoo (Anna Felicity Friedman; Yale University Press, 2015) among premier tattoo artists from around Oceania and the globe. And, well-known anthropologists with expertise in the tattoo art of Micronesia have sought him out to pass along their knowledge, excited to see the Yapese art of tattoo and its designs coming back to life for future generations. But perhaps most exciting for Leo has been getting to know the “godfather of tribal tattoo,” Leo Zulueta.

Visitors have come to Yap from Europe, the United States, Canada and Australia to be tattooed in Leo’s studio. Many who have come as tourists to experience the culture of Yap, considered among the best preserved in the entire Pacific, or to dive with the resident manta rays in Yap’s protected reef, go home with a new tattoo by Leo, a lasting memory of their special time on the island that is called the “Land of Stone Money” in celebration of its unique, ancient form of currency.

Leo’s main interest in tattooing is not just for income, but in reviving an art that was almost lost. The giving and receiving of a tribal tattoo is a sacred event between the artist and the recipient of his art. There is a brief moment when the studio becomes hushed and ready for the gift to be given. Following ancient tradition, Leo bows his head in prayer before he begins.

For more information about Leo Pugram, go to #yaptribaltattoo. To learn more about Yap, go to www.visityap.com. 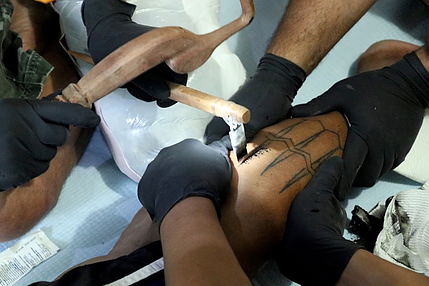 GVB teams up with local artist for ongoing mural series

Undergraduate Student Exhibition opens at Isla Center for the Arts