World Theater Productions (in conjunction with Step Up Entertainment & Dance Company and in partnership with UOG Triton Athletics) presents Disney's Frozen JR. on December 7 at the UOG Calvo Field House. This production is directed by Jojo Urquico and will feature a cast of local elementary, middle and high school students (TerriAnn Hill as Elsa, Raisa Adriano & Jaira Natividad as Anna, Jose Valdez as Kristoff, Kristoffer Aquino as Hans, Xavier Borja as Sven and Christopher Tamayo & Joel Christopher as Olaf). 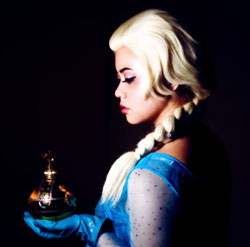 Frozen JR. is based on the blockbuster animated film, and brings Elsa, Anna, and the magical land of Arendelle to life, onstage. The show features all of the memorable songs, with music and lyrics by Kristen Anderson-Lopez and Robert Lopez, plus five new songs written for the Broadway production.

World Theater Productions has been serving as a platform for professional artists from around the world to share their talents and experiences within their respective fields to enhance the theater production on Guam and hone local talents who are serious in getting into the field of entertainment.

In its first 3 years, WTP has staged Broadway musicals such as Les Misérables and RENT and has donated over $26,000 to local non-profit organizations. With the success of Mamma Mia!, it continues to benefit the UOG Endowment Foundation, whose mission is to foster and promote the growth, progress and general welfare of the University of Guam by soliciting, receiving and administering resources to empower and support the University.

For more information and/ or to buy tickets to the show, visit wtpguam.com.

Supporting Your Child’s Education at Home and School