Coconut candy is an island dessert that’s so simple to make, and fun to get the kids involved in making it.

Growing up, we’d make this a lot during Chamorro Week at school. This was also a popular treat at bake sales; coconut candy was usually the first item to sell out.

Freshly grated coconut is a key ingredient, but you can easily substitute it with frozen grated coconut. Just be sure NOT to use the sweetened coconut flakes. I love the taste of coconut, but to me, the best part of this candy is the caramelized sugar (yum!).

Give my recipe a try…get the kids involved in making them too. I’m sure they’d love making AND eating it. :)

1. Finely grate the coconut; the smaller/finer the coconut flakes, the better. You should get roughly 4 cups of grated coconut from 2 large coconuts. If you can’t find fresh coconuts or don’t have a kåmyu (coconut grater), you can buy frozen grated coconut–make sure you use the UNsweetened kind. 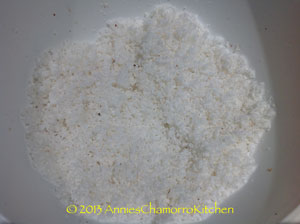 Before continuing with the directions, I think it’s important to explain how to choose fresh coconuts. On Guam, we either cut the coconuts off the trees or pick up the brown ones (niyok) off the ground, then shake them vigorously, listening for the telltale sloshing of the coconut juice. If you live in the states, it’s sometimes difficult to find coconuts that haven’t already spoiled. For this batch, I actually bought four coconuts knowing I only needed two. Sure enough, two of them ended up being spoiled and moldy inside.

Before buying coconuts, shake them. You should hear (and feel) liquid sloshing around inside. If you don’t hear and feel any liquid while shaking the coconut, do NOT buy it–it’s gone bad already. The coconut should also feel rather heavy.  A coconut that either has very little liquid sloshing around or feels light (compared to the weight of other coconuts) are an indicator that the coconut meat inside is dried out or spoiled.

The coconuts I bought–the ones that ended up being bad–had liquid in them when I shook them. However, the coconuts must have sat in the store for who knows how long. In one of the coconuts, the liquid smelled sour (a sure sign of spoilage) and the meat felt slimy (yuck). The other bad coconut, after cracking it open, had mold growing between the meat and shell (more yuck!). And to think I paid about $2 for each coconut….

For those of you living on Guam or in a place where coconut trees abound and you don’t have to pay an arm and a leg for them, be thankful. Ahh…how I miss those days when I could just go out to the back yard and husk open coconuts that just fell off the trees.

Anyhow, on to making coconut candy.

Place the sugar into a large frying pan set over low heat. 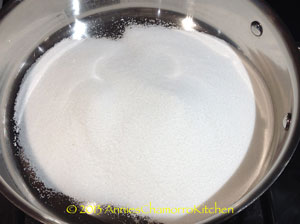 Leave the sugar alone until you see it begin to melt.

Using a heavy duty spoon or heat-safe rubber spatula, scrape the sugar from the edge of the pan to the middle. You’re doing this for a couple of reasons — first, you want to keep the melted sugar from browning too fast and burning.  Second, you’re moving the unmelted sugar to the hotter spots on the pan to begin melting.

The photo right shows a bit of clumping of unmelted and melted sugar. Don’t worry if yours looks like this — keep cooking the sugar over low heat and those clumps will melt right out. 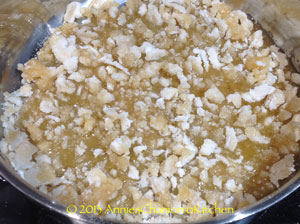 Whew! FINALLY the sugar is melted with a nice caramel color. Use the back of your spoon to smush any stray lumps of sugar (like the ones shown below). 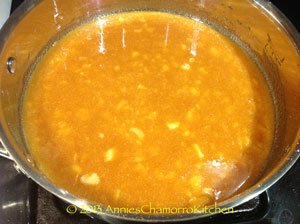 3. Add the coconut to the caramelized sugar. 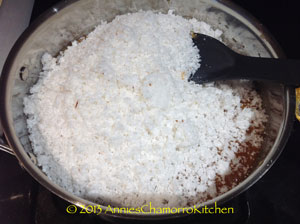 This is what the mixture looks like, with the sugar hardening after adding the coconut. 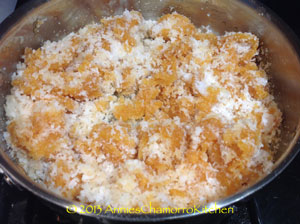 Keep cooking the coconut-sugar mixture over low heat, stirring occasionally until the sugar re-melts. Turn off the heat once the sugar is melted again. Stir the mixture one last time to evenly mix the sugar and coconut together. 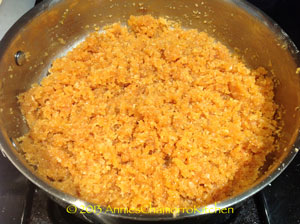 Using a couple of tablespoons (I used a small cookie scoop), scoop small amounts of coconut candy onto a piece of waxed or parchment paper.

Let the candy cool for a couple of minutes, then use your impeccably clean hands to roll the candy into balls.   Wrap each ball of candy with plastic wrap. The candy will keep for about 2 weeks (at room temperature), but I highly doubt they’ll last that long (before it gets devoured). ENJOY! 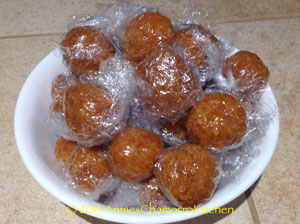