Desperados has been featuring a popular steak pairing menu for a few months and I finally was able to stop by and see how their 20 Porterhouse Steak would stack up against some of the other steaks I’ve been experiencing. For $36, it’s a pretty good deal considering that the meal includes a baked potato, Texas Toast, house salad, and your choice of a beautifully paired glass of Beringer wine or an iced cold bottle of Heineken.

I did make an effort on this well-seasoned, medium rare steak, however, it proved to be too much for me to finish, so I took 3/4 of it home! I did eat the salad and baked potato. I was encouraged by their friendly serving staff, Keani Flores and Crystal Conner, however, there is a limit to how much I can eat for lunch. I did observe that Desperados is a cool sports bar, with the games broadcast on large screen TVs behind the bar. 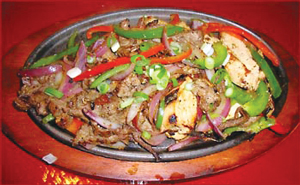 On a separate visit, I finally had something I’d been craving for a while which was their famous Fajitas. I had the steak and chicken (combo) $15.95, which is seasoned and grilled with bell peppers and onions, served on a sizzling hotplate with a side of flour tortillas, Spanish rice refried beans, guacamole, sour cream and pico de gallo. This is a generous serving of lean steak and juicy chicken that’s delivered with much fanfare and sizzling activity.

It is one of their signature entrees and I do understand why.

I have to give a shout out to my friend Dave Mayers who has focused his time and talents in the kitchen making improvements and tweaking the menus. He also created a specialty dessert, a cherry tart ($4.50), which has vanilla ice cream, whipped cream, chocolate sauce, cinnamon sugar and cherries. If it sounds good and even looks good, then it’s reasonable to understand why it is a worthy dessert! Try it on your next visit to Desperados!