I've always admired Tom Hanks as an actor. His performance as Forrest Gump is among the best life-story films ever made. The fact that this epic movie was the model for a restaurant chain named after the movie is mind-staggeringly ingenious. It all fits so well into the real world love for shrimp. And now, Bubba Gump Shrimp Company is on the idyllic tropical island of Saipan, right in the heart of Garapan (it would be akin to Guam's Pleasure Island location), which optimizes the tourist foot traffic which will surely increase once the Grand Mariana Hotel & Resort open their doors just behind them!!

If you are like me and have never gone to a Bubba Gump's in the Mainland or anywhere they've opened in Asia (like the Philippines), you will be completely swept off your feet by the sheer magic and wonder of Hollywood celebrating Americana and the charming culture of the South! I've talked to people who have seen the movie 20 times! That should help them answer the trivia questions Bubba Gump's energetic and engaging servers pose after you've settled down and had an appetizer or two.

I was invited to try out Bubba Gump's by my friend, Mike Sablan, who is an executive with the franchise holder, Triple J Saipan. Joining us was another Saipan friend, Jay Santos, with whom I've collaborated judging and emceeing the Taste of the Marianas Culinary Competitions over the past 10 years. Another Triple J Saipan Manager, Perry Inos, also joined our group. I knew his late grandmother from Rota, Diana, as well as his grandfather, Joseph, who were customers of mine for their bakery. Rounding out our gathering was Ringo Medina, restaurant manager, who had managed the Philippine location. 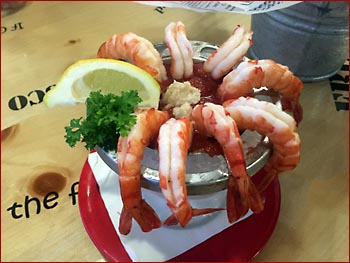 Let's get to the food! The menu is weeks long - that's how many time you are going to have to come back to try everything you want! We barely scratched the wood table tops with our sampling of the menu, which started off with the Bubba Gump Traditional Shrimp Cocktail ($12.95), which has Classic Jumbo Shrimp served with Bubba's own Zesty Homemade Cocktail Sauce. Definitely a high quality shrimp that lets you enjoy the natural sweetness and firm meaty texture without frying, sauteing or grilling. 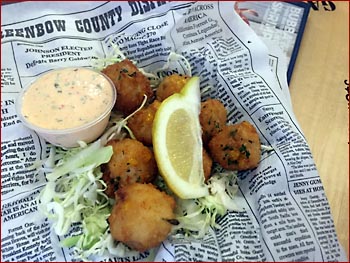 Next we had the Seafood Hush Pups ($11.95) - Not quite Hush Puppies - "we make 'em better" ! These Hand Rolled tasty Shrimp and Fish with golden Corn are deep fried and served with a Remoulade Dippin' Sauce. They were alright - I've been trying to avoid fried foods but these were given a pass! 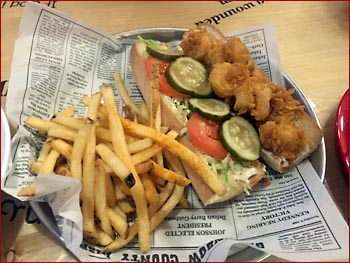 The Shrimp Po Boy Sandwich ($14.95) has a Fresh Toasted Baguette stuffed with warm, hand-breaded Shrimp, Tomatoes, Lettuce, Pickles, & Mayo. It's served with Fries, and costs $14.95. I really liked all the ingredients...the Baguette needed a little more work (it's been about two months since I ate there for this review) so they probably resolved the bread consistency issue by now. 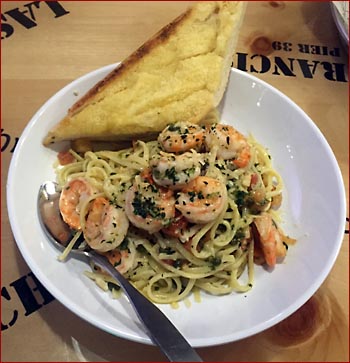 One of my favorite shrimp preparations is scampi, and their menu boldly pronounces: "...Of Course we have Scampi!!" Yes, they prepare Tender Shrimp sauteed with Capers in Lemon Garlic butter, served over a bed of Linguine ($19.95). I really liked this dish...it's a natural marriage - pasta, shrimp, garlic and butter. I could (and will) eat this again. There is a profusion of big shrimp throughout the pasta in this dish! With the garlic bread it's more than enough for two or more people to share as a meal on its own. 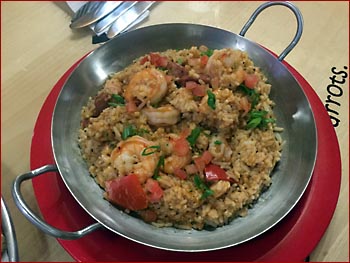 A classic Cajun standard for me is Jambalaya, and Bubba Gump's has Aced this one with Blackened Chicken, Shrimp, and Andouille Sausage, sauteed with Bell Pepper, Onions, and rice in Bubba's own Spicy Sauce. It's generously Topped with Tomatoes and Green Onions, and you can have it for only $18.95! It is absolutely shareable. In fact, I recommend you go with several friends and just share the dishes so you get a taste of many things! 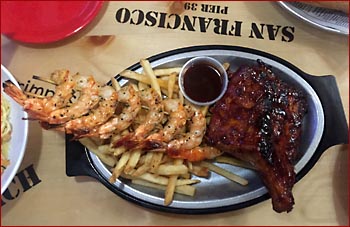 Our last entree was Lt. Dan's Surf & Turf, which is made with Bubba Gump's award-winning Dixie Style Baby Back Ribs, slow roasted to perfection along with succulent Grilled Shrimp and Fries ($25.95). I don't think the photo does justice to the actual amount of food is on this hot platter! There are right jumbo shrimp (they're so big they are skewered off the plate). I have to admit they did right by their ribs. "Awesome is as awesome does"!! - and awesome did these ribs! 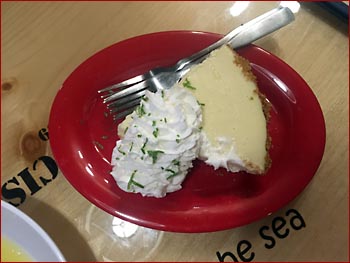 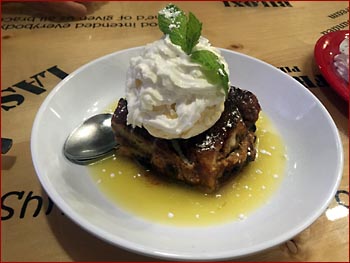 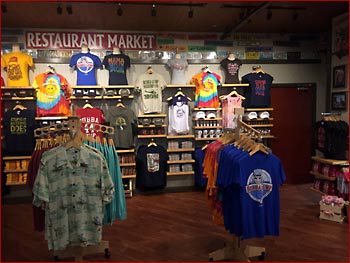 I can't say how it was possible but we were persuaded to save room for dessert - at least a taste! They should have twisted my arm harder - the Key Lime Pie ($8.95) is to die for! Imagine, going all the way to Saipan for Key Lime Pie! It's that good! We also had Mama's Bread Pudding ($9.95), which was respectable. This place seems destined to succeed by virtue of their novelty. It also gives Saipan another theme destination - it's a fun place and you want to remember your time here, so get a souvenir or two, or three! Come enjoy the excitement of dining at Saipan's newest enterainment destination! You'll be running across the country like Forrest Gump in not time!

Nuts & Grains a healthier choice for the family