In Guam and the other Mariana Islands and other islands throughout the Pacific, rice is considered one of the most important food staples. Bags of rice are shipped to the islands regularly. In the Marianas, rice is served at most every meal or special occasion. Fiesta plates are not complete without rice. Because much of our rice is imported today, many people are surprised to learn that the ancient Chamorros cultivated rice. However, during the Spanish era, another starchy plant, corn, was introduced, and soon tortillas – known in the Marianas as titiyas – replaced some of the traditional starches of rice, taro, yams and breadfruit.

According to early historic accounts, rice (Oryza sativa) was produced in large quantities, and was used as a commodity for trade between islands and later, with the Europeans to obtain metal.  Rice, however, is significant archeologically because the Chamorros of the Marianas were the only Pacific Island people who cultivated rice in the tropics dating back to ancient times.  While the cultivation of rice provides further evidence for the theory of the origin of Chamorros from Southeast Asia, it may also suggest contact between rice-growing peoples from the Philippines or Asia and the Chamorros. The circumstances of these contacts, obviously, are unknown.

Historic accounts by early European visitors indicate that rice was grown and used for trade between villages and with European vessels, but the Chamorros cultivated rice long before Ferdinand Magellan’s expedition landed in the Marianas in 1521. An archeological report from 1971 included evidence of a rice grain impression on a piece of ancient pottery found in Rota that dated hundreds of years before the arrival of the Europeans.

Rice crops were grown using swidden (slash and burn) agriculture methods, whereby natural vegetation was cut and burned or buried to clear areas for cultivation and enrich the soil. Rice was planted by hand in natural swamps with the use of a kind of wooden digging stick or hoe known as a tatum.  Swampy areas near the villages of Hagåtña, Agat, Talofofo and Merizo were ideal places for planting rice.  Planting was done in the Chamorro lunar month of Fa’gualo, the equivalent of late October in the modern calendar, and harvested almost half a year later using bamboo knives or tools fashioned from the edge of conch shells.

The rice was then husked using a wooden pestle called a fa’lu and stone mortar, or lusong. The husked rice was collected on woven mats and stored in baskets or clay pots for later use. One possible method for cooking rice involves wrapping the raw grains in banana leaves and placing them in a green bamboo tube filled with water. The tube was then placed over a low fire, cooking the rice before the bamboo caught fire.  Clay pots may also have been used to boil rice, but this is not certain, as no pot sherds (fragments) with residue from rice starch have been recovered yet.

The Spanish who traveled through the Marianas for provisions described rice as a trade item between villages, as well as one of the items presented to them to trade for iron.  Catholic missionaries also observed that rice was a ceremonial food, reserved for special occasions such as funerals, fiestas, war rituals and marriages.  Spanish friar Fray Juan Pobre de Zamora, who lived among the Chamorros in Rota in 1602, observed a kind of rice drink mixed with water or coconut milk that was served to the skulls of their ancestral spirits after successful fishing expeditions.

However, Pobre’s experience is predated by that of another Spanish missionary, Fray Antonio de los Angeles, who lived among the Chamorros on Guam from 1596-1597.  Fray Antonio observed that Chamorros served rice “cooked only with water” during their fiestas.  At funerals, the people who sang for the dead would be served rice from the family of the deceased, along with a drink.

The Chamorros also celebrated a yearly fiesta at Fouha rock where the spirit goddess Fu’una had created the Chamorro people.  There, the natives prepared rice cakes and presented them as offerings.  The blessed rice would then be kept later and taken back to their villages to cure the sick.  Ancient Chamorros also used rice  in other important ceremonies such as marriages and childbirth rituals and customs.

Hineksa’ sinagan, for example, were prepared rice cakes formed in the shape of a large pyramid and given as wedding gifts.  In addition, rectangular-shaped kottot baskets (made of woven pandanus) filled with rice were also valuable gifts for weddings and childbirth celebrations.

Although not as spiritually significant for Guam society today, the imported, processed rice we eat is used extensively in a variety of dishes, including potu (tuba rice cakes), empanada (a meat and rice turnover), chalakiles (an achote flavored toasted rice soup), champulado (chocolate rice pudding) and hineksa’ aga’ga (red rice).  Nevertheless, rice is archeologically and culturally significant for the Chamorro people because of its long and unique history in the Mariana Islands.

Linguistic evidence suggests that the first Chamorro migrants may have brought the knowledge of rice cultivation with them when they settled in the Mariana Islands, and archeological evidence shows that rice was an important part of the ancient Chamorro culture.

Making cakes out of grain 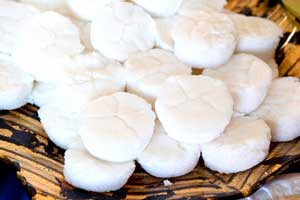 History
Origin
Potu are tuba-flavored rice cakes that were most likely introduced to Guam by Filipino immigrants during the Spanish era, along with other food items such as pancit, lumpia and dinaguan (fritada in Chamorro).  In the Philippines this steamed white rice cake is known as puto.  There are different varieties and recipes for puto in the Philippines, but for Chamorros, the main ingredients in potu are rice and tuba.  Tuba is a fermented drink made from coconut sap.

Evolution
Rice was cultivated by the ancient Chamorros, and was the preferred grain up through Spanish times, in addition to corn.  On Guam, rice was grown primarily in low-lying areas, while in the northern islands, at least through the German era, rice was cultivated along terraced slopes on the volcanic ridges in Rota and in marshes around Lake Susupe in Saipan.  This technique of wet cultivation was introduced by Filipino immigrants during the Spanish era.  Both men and women participated in the cultivation of rice as a communal activity. During the early American era, however, because rice cultivation was laborious, along with limited space for wet cultivation, rice was grown less and less, and imported rice became more popular.
According to Guam historian Robert Rogers, tuba was introduced to Guam as early as 1668 with the arrival of the Jesuit missionary, Father Diego Luis de Sanvitores, by his Filipino helpers.  Laura Thompson described in her ethnography of the Chamorro people how tuba was produced.  Basically, the sap of the coconut plant is collected and fermented to produce a slightly intoxicating substance. The substance could be distilled further to produce a type of rum, called aguardiente.

Preparation
Most fiestas will feature potu that has been purchased from the local grocery or mom-and-pop stores, as preparing potu with the proper texture and flavor is tricky.  Indeed a handful of families are reputed to make good potu, such as the Pablo family in Mongmong and a family in Saipan whose traditional clan name is Familian Potu.

Placement on table
Although potu is often eaten as a breakfast item, like a pastry, or a snack, these simple-looking rice cakes are still special enough to have a place at a large fiesta, alongside other desserts at the end of the table or on a separate table.


Add water to cover the level of rice. Let rice soak for two hours, then rinse. Grind rice to a powder. Mix the remaining ingredients and allow to soak overnight. Stir three times during the night. Pour into poto cups** and steam for ten minutes. May be baked at 350 degrees for 10 minutes or until golden brown. Serve with butter. 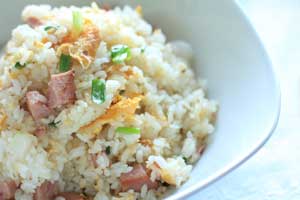 Fry onions until soft, add luncheon meat and continue frying until golden brown. Add cooked rice and fry for about five minutes or until the rice is shiny. Add soy sauce and continue to fry for another five minutes. Set aside. Saute’ beaten eggs in a little oil, scrambling them. Chop the eggs into pieces. Put fried rice in a bowl or platter and garnish with chopped eggs and green onions, if desired.
Editor’s note: This recipe is from Lepblon Fina’tinas Para Guam: Guam Cookbook, 1985. Reprinted with permission from Congresswoman Madeleine Z. Bordallo, Y Inetnon Famalao’an (Women’s Association).
* Y Inetnon Famalao’an was a women’s organization composed of cabinet wives and women executives in the government of Guam.
– Judith Guthertz, Guampedia 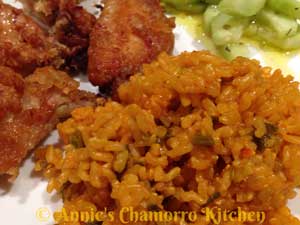 My family is making a concerted effort to develop healthier eating habits. We’re making small changes in the foods we eat as well as how we prepare them.

One change we definitely like is that we’ve made the switch from white to brown rice. I admit, it took some getting used to, but we actually like it. Of course, I have to season the brown rice whenever I cook it.
I wanted to see if the classic Chamorro Red Rice would taste good using brown rice instead of the usual white medium or long grain rice we know and love.

The result? Delicious! Granted, you can definitely tell you’re eating brown rice (it’s firmer and a bit nuttier than white), but delicious nonetheless.

Give my recipe a try. I think you’ll like it.

Recipe
Ingredients
• 3 cups brown rice (use your rice cooker cup)
• 6 1/3 cups water (use your rice cooker cup) (*See note below)
• 1 packet achote powder (*See note below)
• 1 tablespoon olive oil
• 1 bunch green onions, sliced
• 1 tablespoon Dashida seasoning (or salt, to taste)
You can use achote water made with achote seeds instead of achote powder. Scrub the seeds in the water; strain out the seeds before using.

1.Rinse the rice then place into your rice cooker pot.
2. Add the water.
3. Add the achote powder.
4. Add the olive oil.
5. Add the green onions.
6. Add the Dashida seasoning.
7. Cover the pot then turn it on or place it on “cook.” After about 5 minutes, open up the lid and stir the rice, ensuring the achote powder and Dashida seasoning are dissolved and evenly distributed. Place the cover back on the pot and let it finish cooking. After your rice cooker turns from “cook” to “warm” (or the equivalent for your rice cooker model), be sure to keep the lid closed, letting the rice continue steaming for 10-15 minutes before serving.
8. We love red rice with fried chicken and cucumber salad. Serve with your favorite main dish(es) and enjoy!
– Army Lt. Col. (Ret.) Annette Merfalen

Recipes to ring in Guam’s holidays