In a continuous march to bring out popular franchise brands, the owners of Guam’s Submarina franchise have opened Papa John’s this past year and so far it’s been a success! This one location is shared with a Submarina as well as a soon-to-open frozen yogurt franchise called YoMazing! Premium Frozen Yogurt. It’s kind of like a self-contained mini-food court in Dededo. 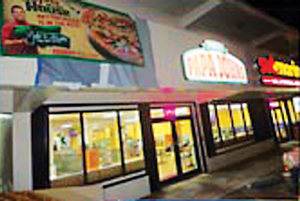 It fits well with the young family demographic, and the brand names are recognized by the military customers (who like seniors get a discount here). I can’t remember when I last had a Papa John’s pizza pie, so this is closed to being totally new to me. They said their most popular pizza is the chicken spinach Alfredo with grilled chicken, and cheese with spinach and garlic parmesan Alfredo sauce ($16.99 for a 12” Medium). But I enjoyed “The Works.”

One of the interesting things they offer is a special garlic dipping sauce that comes in a container and is used for bread sticks or pizza. I was surprised by this light garlic sauce. This was provided FREE with my original crust pizza along with a free Pepperoncini.

I also ordered one of Papa’s Wings ($7.99) and wanted them cooked without any sauce. I had the Buffalo Hot Sauce on the side along with a Barbeque sauce. The wings were OK. Other sides include cheesesticks, breadsticks, chicken poppers, garlic parmesan breadsticks and Cinnapie, none of which I bothered to have. I had enough pizza to last me a while.

Papa John’s takes pride in their pizzas, claiming that they use better ingredients to make better pizza. I think they are on to something with this strategy. It’s all about ingredients! Now that Papa’s in the house, we may be able to see who will win Guam’s pizza war! They are open from 11 a.m. to 10 p.m. daily; you can dine in or take out, 633-7751.

Nuts & Grains a healthier choice for the family