Welcome to the jungle! Guam land crabs a tasty treat!

Photo courtesy of the Guam Guide

Welcome to the jungle! Guam land crabs a tasty treat!

What has six legs, gnarly claws, climbs trees and can grow to the size of a small dog? Oh! It’s tasty, too.

The answer is a coconut crab, or what the local Chamorros call “ayuyu.” These giant crabs are on islands throughout the Western Pacific and East Indian oceans. But on Guam, they have had long history with locals and visitors alike – primarily, but not exclusively – as a delicacy. But now these giant island mascots are in danger. 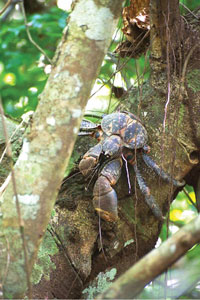 Birgus latro, commonly known as the coconut crab, is the largest terrestrial arthropod in the world. It is a type of hermit crab that can grow to a leg span of more than three feet, weighing over nine pounds. However, they are more outgoing than their hermit counterparts.

While most hermit crabs spend their entire lives inside their shells to protect their soft bodies from predators, coconut crabs rely on those shells only when they are young and small. When they grow older, they abandon them and develop hard exoskeletons that continue to grow with the rest of their bodies.

These crabs have also been nicknamed “robber crabs” on Guam. Rumor has it that they earned that reputation by stealing items from U.S. Marines in the trenches during World War II. They’re known to wander into unlocked houses and steal knives, forks and even shoes. So, if you are missing some household items, look around for one of these big guys conspicuously crawling nearby.

Anyone who has seen a coconut crab knows they also have huge claws. These claws are powerful enough to tear through the tough shell of a coconut to get at the sweet coconut meat. They can climb up to 20 feet high just to reach growing coconuts. Though not a major part of their diet, perhaps this taste for coconuts is what makes them so tasty.

On Guam, Chamorro have eaten coconut crabs for centuries as part of their cultural tradition. The meat has been traditionally served at various ceremonies and events such as weddings. It is so tender that it is often compared to lobster. But the high demand for both home and high-end restaurant consumption has led to rampant hunting of the crabs.

It is said that the population of larger crabs on Guam is nearly depleted, and hunters have now turned to younger and smaller crabs. Coconut crab shells have also become popular souvenirs for tourist, prompting even more hunting. As a result of these demands, the coconut crab population has been declining rapidly.

In 1981, the coconut crab was listed as a “vulnerable species” on the International Union for Conservation of Nature Red List. However, a lack of accurate information caused the crab to be classified as “data deficient” in 1996.

Today, according to the Guam Department of Agriculture, coconut crabs must be at least four inches long to be sold commercially and at least three inches long for personal consumption. It also is illegal to collect coconut crabs with eggs. Selling undersized coconut crabs is an offense punishable by arrest and fine.

According to one study, the ccoconut crab is also threatened by the development of Guam’s coastal zone. Emily Lu writes in the Scientific American that recent heavy development is continually reducing the crab’s preferred habitat on Guam. Typically, female coconut crabs release their eggs within a few miles of the ocean because they hatch only upon contact with saltwater.

Today, the highest crab densities on Guam can be found on military installations, where limited civilian access makes it difficult to hunt crabs, according to Lu.

In fact, all coconut crabs can find sanctuary on both Naval Base Guam and Andersen Air Force Base. Hunting them, regardless of their size, is banned on both bases, according to Leanne Obra, 36th Civil Engineering Environmental Flight natural resources specialist at Andersen.

“The coconut crab is a unique and fascinating component of the biota of Guam, the Marinas, and Federated States of Micronesia,” said Obra. “The Andersen Air Force Base environmental office is available at any time to answer questions about protection of the coconut crab to help preserve the species for the meaningful role they play in the Chamorro culture and its popularity as a tourist attraction.”

Obra advises that if people see the crabs on base, they should leave them alone. Illegal collection of crabs on military installations should be reported immediately to Andersen’s Natural Resources Conservation Program at 366-5078/1849.

You may be hesitant to pet the largest land-living arthropod in the world, but go ahead, the coconut crab doesn’t bite. Coconut crabs can weigh up to nine pounds with a leg span of more than 3 feet. Locals are adept at handling the crabs and sometimes keep them as pets. Stop by the Chamorro Village Night Market on Wednesday and Friday for a photo op of you or someone brave petting a giant crab.

Hog wild: Why Chamorros enjoy pigging out on Guam