An astounding number of organisms make their homes on the coral reefs of War in the Pacific National Historical Park in the waters of Guam-in fact, more species of corals, fish, and invertebrates live on these reefs than on the coral reefs of Hawaii or Samoa. This incredible biodiversity makes for an amazing and complex ecosystem. On Guam reefs, you will find herbivores such as kichu, (convict tangs), and palakse (bullethead parrotfish), and predators such as I‘e (jacks) or gadao, (groupers). Traditionally, these fish were an important part of the Chamorro diet, and are still fished for food today. The diversity of the plants and animals found on these reefs is rarely matched anywhere in the world. 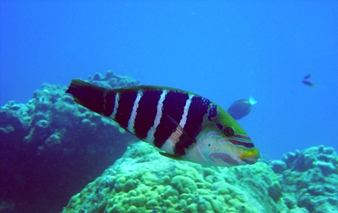 - Though there is high coral diversity, few juvenile corals are growing on the reef.
In addition to historical resources, the park also contains over 1,000 acres of marine ecosystems. Fringing coral reefs provide shelter and food for a wide diversity of corals and fish. Yet scientists have observed a decrease in the number of new or juvenile corals on the reef. Monitoring suggests that low coralline algae cover (4%) could be one cause of this decrease in juveniles (NPS 2009). Corals settle and grow on coralline algae, and when there is not appropriate algae cover, fewer corals can grow. In this park, low coralline algae cover may be connected to low live stony coral cover (10%; NPS 2009). If the number of juvenile corals does not increase, live stony coral may become increasingly rare on these reefs. Cover refers to the space covered by a particular organism on a reef or seafloor when viewed from above. Scientists often use changes in coral cover over time to monitor the overall health of a coral reef. 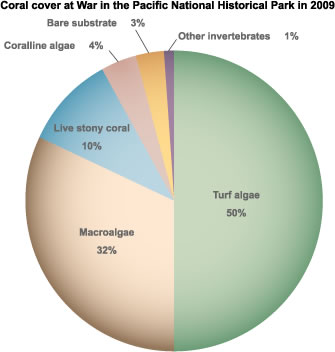 - Climate change, sedimentation, and overfishing impact corals in War in the Pacific National Historical Park.
As we enjoy the beautiful biodiversity of the coral reefs in the War in the Pacific National Historical Park, we need to understand that natural and human processes are threatening the health of coral reefs in this region. For example, using fossil fuels releases greenhouse gases into the atmosphere that contribute to global warming, clearing and burning vegetation allows more sediment to wash into the ocean and on to coral reefs, and taking fish from the reef faster than the population can reproduce reduces the number of fish on the reef and alters the balance of the food web.

- Coral reefs at the park may be less resistant to ocean acidification and bleaching.
Current threats to coral reefs at War in the Pacific National Historical Park will only be increased by climate change. For example, low numbers of herbivores (a result of overfishing) and poor water quality (caused by sedimentation from run-off on the land) put stress on corals. If corals are already living under stressful conditions, they become less resilient or less able to adapt to changes in the environment (Burdick et al. 2009). In the face of climate change, corals must contend with changing conditions, such as rising water temperatures and ocean acidification. Those corals already under stress will become less healthy as the alterations brought on by climate change become even more pronounced.

Ocean acidification also affects coral populations. Already, reef monitoring has recorded low coral recruitment (the number of juvenile corals that settle on a reef) in this park (NPS 2009); Warmer water temperatures and the ocean acidification associated with a change in water chemistry (lower pH) will reduce or prevent coral growth (Kleypas et al. 2006). With low coral recruitment and slowed coral growth, coral reefs are less able to maintain their structure and are more easily damaged by waves and storms.

- Land clearing causes sediment runoff on coral reefs
Each time it rains, soil on bare land washes into streams and into the ocean. Lands become bare when wildfires are set for ease of hunters or when bulldozers remove plants and trees to make room for development or agriculture. Without plants and trees to soak up the rainwater and trap sediments, loose soil erodes from the land as runoff and clouds waterways. When soil is carried to coral reefs, it reduces water clarity and smothers corals by settling on the reef. As more and more land is cleared of plants and trees, larger and larger amounts of soil make their way to coral reefs, sediment runoff increases, and the threat to coral reefs grows. As a result of a lack of vegetation, park lands are more susceptible to erosion and sediment runoff on park coral reefs increases.

Scientists at War in the Pacific National Historical Park have observed low coral recruitment on the reef and believe that sediment runoff may be the cause (PACN 2006). With low numbers of coral recruiting to the reef, coral reefs are less able to grow or maintain their structure. In order to reduce soil delivery to coral reefs, park staff will continue to work with communities to support replanting programs, to discourage fires, and continue to monitor sediment on the reefs (NPS 2009).

- Overfishing and modern fishing methods are reducing the number of large reef fish
In recent years, people have seen fewer and fewer large fish on the coral reefs of Guam, even on reefs with healthy coral communities (Burdick et al. 2009). One reason for this decline is modern fishing practices that allow people to take large numbers of reef organisms such as parrortfish, surgeonfish, octopus, and other commercially important species (Porter et al. 2005). Of particular concern are the non-traditional fishing methods of scuba spear fishing and monofilament gillnet fishing (Burdick et al. 2009). In fact, scuba spear fishing has probably contributed to the dramatic decline of humphead wrasse and bumphead parrotfish on local coral reefs (Burdick et al. 2009).

Low numbers of algae-controlling herbivores (caused by overfishing), upsets the balance of the coral reef food web. Without herbivores to control the amount of algae growing on a reef, algae can grow rapidly and smother corals. Overfishing also impacts our diet. If the fish caught for food become more and more scarce, it will be harder to prepare daily meals and traditional dishes.

Spearfishing a way of life for Chamorro of Guam