Fort Nuestra Señora de la Soledåd, or Fort Soledad, the last of four Spanish fortifications built in the village of Umatac, is located atop a steep bluff called Chalan Aniti, or Path of the

Ancestors. The fort provides a superior view of the village, the bay, the rugged coastline, and the imposing southern mountain range. The fort was constructed to strengthen the defenses of Guam’s most prominent Spanish-era bay.

Umatac Bay served as an important supply station for ships crossing the vast Pacific Ocean during the era of the Acapulco-Manila galleon trade (1565-1815). With an increasing number of non-Spanish ships sailing through the Pacific in the last half of the eighteenth century, it became necessary to protect Spanish interests on the island. Fort Soledad helped to strengthen flaws of the other forts built along Umatac’s coastline. Fort Santo Angel, located on the opposite side of the bay, was built in 1756 and had been badly damaged from years of pounding waves. Governor Alexandro Parreño (1806-1812) determined that the foundation supporting the fort was unsafe and had the fort dismantled. Fort San Jose, despite being newly constructed in 1805, was positioned too far north to adequately protect the entrance of the bay.

Although Governor Vicente Blanco (1802-1806) had described artillery that had been mounted on Chalan Aniti as early as 1803, it was not until some time during Parreño’s administration that the fort’s construction was completed and officially named Fort Nuestra Señora de la Soledåd, Our Lady of Solitude. In a document dated 1810, Parreño described the features of the newly built fort, which included a barbette, a guardroom for officers and troops, and an arsenal storeroom.

The fort faced the sea and was elevated eighty varas, or approximately 224 feet, above the bay. The esplanade was paved with flagged coral stones and was partially surrounded by a low parapet constructed of mampostería, stone and mortar. The fort could accommodate seven cannons that were to be fired on a fixed line over the parapet.

Unfortunately for Spain, the Mexican Revolution brought an end to the galleon trade. By 1815, the last Cavite ship returned to the Philippines from Acapulco, signifying the end of an era. Spain no longer had the means to maintain Guam’s fortifications and Fort Soledad was allowed to deteriorate. Treasure hunters expedited the fort’s destruction as they pulled up the floors in search of the fortune rumored to be buried at the site. After the Second World War, souvenir hunters continued to pillage the fort. The government of Guam, however, stopped the complete destruction of the fort and continues to protect the site as a public park.

The fort’s sentry post, overlooking the picturesque bay, has become an icon of the island’s beauty and the days of the Spanish Galleon trade. Today, the park is one of the most visited places in southern Guam. In the mid 1990s restoration efforts were made to the area’s stonework and more recently several beautification projects have been undertaken by the community to improve the historic landmark. 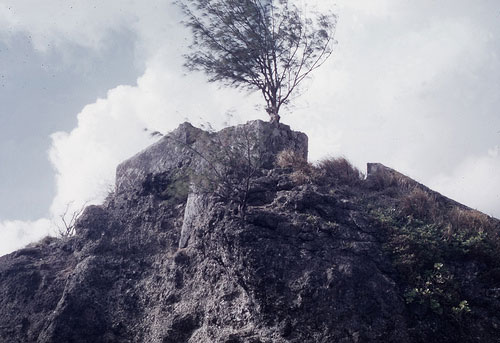 Fort Santo Angel was the second of four Spanish fortifications built in the southern village of Umatac in the midst of the galleon trade era. The fort was constructed on top of a large rock structure that is situated at the entrance to Umatac Bay. From this vantage the fort could defend the anchorage and the channel entrance to the bay from the increasing number of non-Spanish ships navigating through the Mariana Islands.

By the early eighteenth century, Great Britain, Holland, and France had increased their presence in the Pacific. To allay this threat, Spain launched a naval expedition in 1716 that captured six illegal French merchant vessels. With Great Britain and Holland still a threat in the Pacific, Spain initiated plans to improve Guam’s defenses. An earlier incident on Guam had also alarmed the island’s governor, Juan Antonio Pimentel (1709-1720). In March of 1710, four war ships, under the command of English privateer Captain Woodes Rogers, anchored off of Umatac Bay with 200 well-armed and battle-ready crew members.

Pimentel, knowing his forces could be overwhelmed, struck a deal that allowed the privateers to replenish their ships in return for the release of Spanish prisoners that were held aboard the English ships. Pimentel would later have to answer for his hospitality toward Spain’s enemies.

This episode, however, encouraged Pimentel to write Spanish authorities regarding the importance of defending Guam as a last line of defense before the Philippines. With the increasing presence of foreign ships with well-trained crew members skirting the island, Pimentel recommended that a fort be built at Umatac in addition to the existing shoreline battery. The plan for Fort Santo Angel was realized sometime within the next three decades. The earliest historical record of the fort was made by British Commodore George Anson in 1742 through information he received while anchored at Tinian.

In 1756 Governor Enrique de Olavide y Michelena (1749-1756 and 1768-1771) rebuilt Santo Angel after he observed that the artillery emplacement there was merely protected by ditches in the rock. The new fort was also built atop the fifty-foot high rock-like promontory and was accessed by steps cut into the rock. On the top of the promontory was a flagstone esplanade that measured forty by twenty-four feet. Surrounding the esplanade was a one-foot-high and eighteen-inch-thick mampostería, stone and mortar, wall.

Separating the esplanade and the stone steps was a thirty-foot-long entranceway. A mampostería guard room measuring ten feet by fifteen feet was also erected on the bay side of the entranceway. Santo Angel was built to house three cannons that could effectively damage ships, but its wall was low which left soldiers and gun-carriages exposed to enemy fire.

Over time the fort suffered damage to its foundation from years of pounding waves. Governor Alexandro Parreño (1806-1812) determined the fort to be unsafe and had it dismantled. The existing structure, without its guns, was used to hold piles of wood which, when lit, provided safety for ships at night. Today, ruins of the fort can still be seen along Umatac Bay’s north entrance. However thick vegetation covers much of the site. 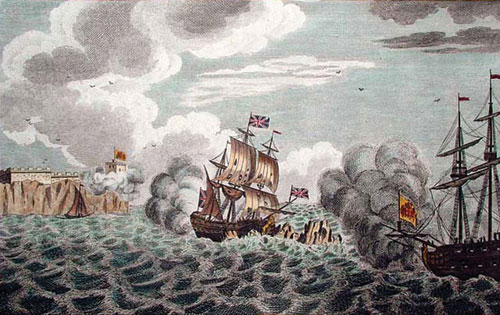 Fort Santiago was the second of three Spanish forts built to defend the anchorage at Apra Harbor. The fort was constructed at the tip of Orote Peninsula on the southwestern coastline of Guam. Its location, atop a sheer cliffline overlooking the entrance to the harbor, made it a formidable defensive force.

Despite mixed reactions to the importance of the Marianas in the early 1700s, Spain’s Council of the Indies believed that Guam was an important asset. The defense of the island was considered essential in order to deny occupying forces from taking the Marianas and thereby threatening Spain’s galleon trade with the Philippines as well as its Christian missions in the Pacific. Concerned by the increasing presence of enemy ships in the Pacific and troubled by the 1721 English privateer attack of a Cavite supply ship anchored at Merizo, Spain issued orders to strengthen Guam’s defenses.

In 1734, under the administration of Governor Francisco de Cárdenas Pacheco (1734-1740), a new anchorage was opened in Apra Harbor and by the 1740s most ships, including the wintering Cavite ships, anchored in the harbor. This anchorage offered better protection from inclement weather and it was easier to defend ships from enemy attack. Fort San Luis, built in 1737, was the first fortification constructed to protect the new anchorage. Fort Santiago, the second fortification constructed at the site, was built at a later and yet to be determined date in the 1700s. One account suggests that the fort may have been under construction in 1721. The third fort at Apra Harbor was Fort Santa Cruz built in 1801.

Fort Santiago, situated atop Orote Peninsula, was large enough to house six cannons. Its esplanade was surrounded by a parapet of mampostería, stone and mortar, in which the guns were designed to fire over its top and not through embrasures. The fort also included troop quarters and munitions storage. The face of the fort was well-defended by a sheer cliffline and because of the fort’s elevation, the cannons could fire at point-blank range without taking return fire. The rear, however, was exposed to attack from troops landing at other sites. Its location also required that it be well-staffed because reinforcements were not nearby.

As with other Spanish fortifications on Guam, Fort Santiago gradually deteriorated. By 1853, Governor Felipe de la Corte reported that the three cannons mounted at the fort were unusable. By 1884, Governor Francisco Olive y Garcia stated that the fort was only useful as an observation post. The location of the fort, however, also proved useful to other occupying forces as both the Americans and Japanese installed gun emplacements at the site in the twentieth century.

Currently, the remains of the fort sit on United States Naval Station property and special arrangements must be made in order to access the site.

'The Land of Mystery': Put Pohnpei on you bucket list!

Discover the forts of Guam (Part 2)

Discover paradise off the beaten path in Cambodia

Mango Magic: Annual fruit fest to be held May 24-26