Tumon (GU) — The guys behind the Electric Island Festival, Guam’s first-ever Electronic Dance Music Festival, are back for their 7th year in a row to promote music and social awareness.

Jia Wang, CEO and Marketing Director for EIF, says this season is going to be an amazing run, bringing good music and good vibes throughout 2019.

Since conception to its 7th year anniversary, the journey included uniting people through EDM, overcoming obstacles and never giving up.

Wang and Festival Director Art DeGuzman wanted to bring something new to Guam — start a festival revolution. The concept of bringing an EDM festival to Guam sprang from something abstract, yet so impactful.

“I was amazed at the fact that something intangible such as music and good vibes can attract tens of thousands of people to gather at a music festival to have genuine fun with their friends,” Wang says.

Despite how excited they were to bring that same thing to Guam, the island influencers weren’t ready when Wang first approached them.

“Since Guam has historically been known to have only reggae or hip-hop concerts, and electronic music was also not a very well-known genre yet, almost everyone I spoke to during that time were very skeptic we could pull more than 500 people,” Wang says. “At the time I was thinking of a 1,500 - 2,000 pax festival. People thought I was nuts.”

That was back in 2010 after he met up with 300 Guamanians in Los Angeles to attend the Electric Daisy Carnival, one of the most popular EDM festivals around the world.

“I knew then the timing was right to finally execute on this idea which I had, it's always been my intention to bring the music and vibe back home,” Wang says.

However his plans to launch EIF in 2010 were shot down, but he wouldn’t take no for an answer. Wang flew home to Guam the following year to check out the scene for himself. He performed as a DJ at a few events, and met fellow DJ Ronnie Perez of Hit Radio 100.

“EDM has been on Guam forever,” Perez says. “Ever since the birth. But it was a primarily underground thing. It was not quite mainstream yet.”

The idea of a concert-level music festival was gutsy, but Perez says he had high hopes for its success.

When planning began, partnering with sponsors was an even greater challenge. “There was a lot of pushback in 2010 and 2011,” Wang says. “It wasn’t until we met with the right people that things began to happen. But just because everyone tells you, ‘no,’ it doesn’t mean you give up.”

In order to launch however, Wang scaled back his initial vision and the very first Electric Island Festival was born in 2013.

“We faced painful learning experiences about market demand and chasing too many things at once,” Wang says.

“There are not too many surprises these days, which is good so we can focus more on the creative experience and leveling that up for the coming year,” he adds.

As he looks back at how hard it was to get his concept off the ground, he appreciates what came from the struggles.

“In hindsight, I was glad we were rejected in the beginning because timing truly is everything, and I think because this project got delayed, the demand and curiosity only grew bigger. That's what I think helped kick off our first year to be a success,” Wang says. “Guam was finally ready for it.”

Nine years after the vision, the festival is in its 7th round as one of Guam’s largest music events, and Guam’s only EDM festival.

Perez who was with them from the start, has been a resident DJ each year and seen its exponential growth.

“The location grew from the Beach Bar to the Yigo Raceway. The fanbase has certainly exploded with the help of mainstream music,” Perez says.

It’s also grown into a tourist attraction, bringing in people from all over the region, he adds.

The group experienced a few stumbles as they took their initial steps, but took each roadblock was a learning experience.

“One of the biggest struggles in the past was the logistics and planning phases. From shuttle buses breaking down to extreme rain, there were so many things we didn’t account for,” DeGuzman says. “There is no manual or guide to creating a festival. It’s something you just have to do to learn, and hope for the best.”

EIF has moved beyond a celebration of music. There was a sense of goodwill and unity from conception, but now with the popularity and the support, the team also hosts beach cleanups and seminars for those that want to become DJs.

They give back by promoting social responsibility.

“I want to promote positivity through compassion,” DeGuzman says. “There is so much hate and negativity in the news these days, especially in social media. Step back, breathe and try to understand other people’s hardship. If we all do this, the world can be a better place to live in,” he adds. “My favorite quote is — ‘Be kind for everyone you meet is fighting a hard battle.’”

The team hopes their struggle to turn something seemingly impossible into not only a reality, but a thriving phenomenon will inspire others to keep going.

“On top of positivity, we also believe in working hard,” Wang says. “Our own journey embodies that, putting on a music festival is hard work and we also understand that people who attend EIF are working hard.”

Everyone else behind the scenes are also grinding away to make the event run smoothly.

“And last but definitely not least, the group of passionate individuals who all worked together on this festival bringing it to life. That to me has always been the greatest reward,” Wang says. “The process of making a vision into reality is a feeling I can't really put into words. Without the passionate people behind the brand along with the tremendous support from the local community since year one, there's no way we can do this alone and keep it going for this long.”

For more info and to buy tickets: 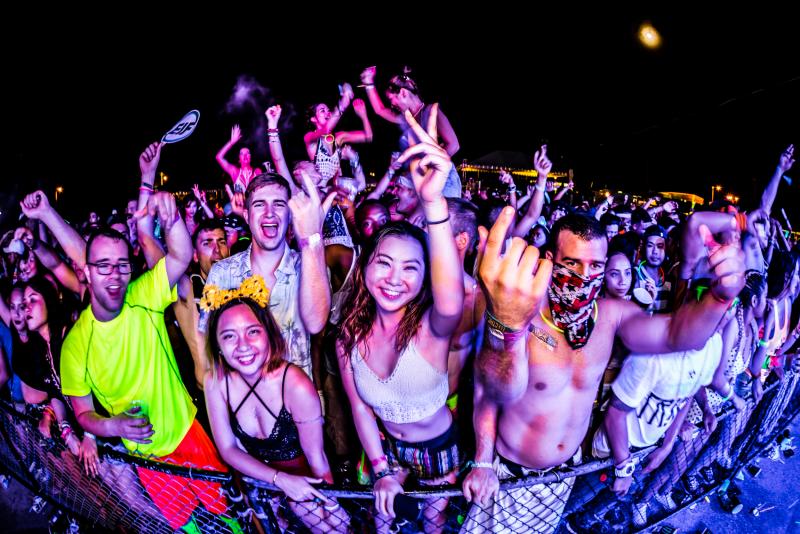