Get to know Guam: Agat key village during WWII

Get to know Guam: Agat key village during WWII

Etitor’s note: The U.S. territory of Guam is comprised of 22 villages, many with their own distinct character, history and points of interest. Stripes Guam and Guampedia have joined forces to present this weekly feature on each of them in the hopes that it will help our readers get out – and get to know – our gracious hosts. To learn more about Guam’s people, history, culture and places, visit: guampedia.com

The village of Agat may have been named by the first clan who came to settle in the area from the northern part of Guam. It is also possible that the village name Hagat originally was derived from the word Aga, which is the Chamorro name of the Marianas crow which is a large black bird that makes the sound “aga” while flying low over the jungle. The village’s name, too, could be derived from the Chamorro word håga, meaning blood.

It is believed that Chief Coroo headed the first clan of Agat. Beloved by his people, he was also the eldest in the clan. Chief Coroo divided the village into families, each with its own surname. Many of these survive today but are referred to as Chamorro family names, such names as Koroo, Kamachili, De’chi, Dagu, Kusiu, Min, Ato and Gotgohu, to name a few.

Spanish Governor Don Jose Quiroga then designed Old Agat between 1680 and 1684 as a settlement for rebellious Islanders whose homes he had destroyed during the Chamorro rebellion. Many of its citizens were brought from the interior village of Fena. The first church in Agat was established in late 1680. In the early 1700s this church was one of only six parishes on Guam. 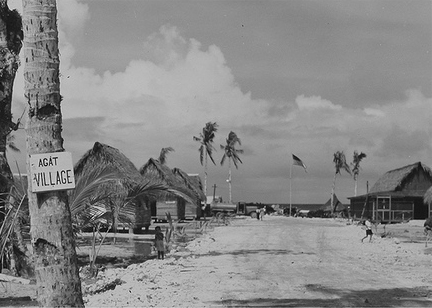 Pre-war Agat was a small village with coasts lined with coconut trees that produced copra (coconut meat). The village also supported farming, ranching, and fishing. Rice paddies existed on the coastal flats as well as the flat inland areas.

Throughout the years of Japanese occupation from 1941 to 1944, new rice paddies were developed in Agat to support the Japanese troops. Local people were forced into labor with little or no subsistence rations. Thirty days before landing on Guam on June 11, 1944, American air forces bombed the beaches of Agat to clear Japanese positions. These bombings continued throughout June and July, destroying Japanese fortifications and virtually all of the structures of the village.

The beaches of Agat and Asan were selected by the U.S. forces for entry into the island, with two Marine Regimental Combat Teams and an Army Infantry Division landing at five points along the Agat coast. They faced a seventy-five-millimeter gun and a thirty-seven-millimeter gun mounted by the Japanese in a concrete blockhouse at Ga’an Point. In just the first day of the American invasion of Agat beach on July 21, 455 Marines were killed and 536 were wounded. By nightfall, the Americans secured the Agat beachhead, but were heavily assaulted by Japanese tanks that night. Heavy fighting ensued, and by the morning of July 22, the Americans had won the area and pressed onward toward Orote Point, eventually joining the forces that had landed in Asan. 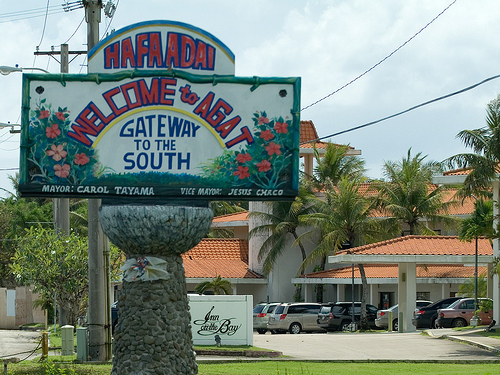 After the Americans secured Agat beach, a refugee camp was established for Chamorros freed from Japanese-made camps. At its peak, 18,000 people were housed in the Agat camp. Following the return of American forces, residents of Agat lived in temporary houses before a new Agat village was established at a location farther south. Both the military government and Chamorros built homes at the new site.

In August 1978, the US National Park Service established the War in the Pacific National Historical Park on Guam, which included sites at the Agat invasion beaches.

Mount Alifan
This mountain rises 871 feet above the Agat’s beaches and contains remains of the fighting between US and Japan’s armed forces at the end of WWII during the recapture of Guam. For the most part, the remains are craters, foxholes, emplacements, caves, and rifle-pits. Only two small features are constructed of concrete. Following capture of the mountain, American demolition teams sealed many caves on the forward slopes. The slopes contain many artifacts from the battle, including shell and bomb fragments and bullets. 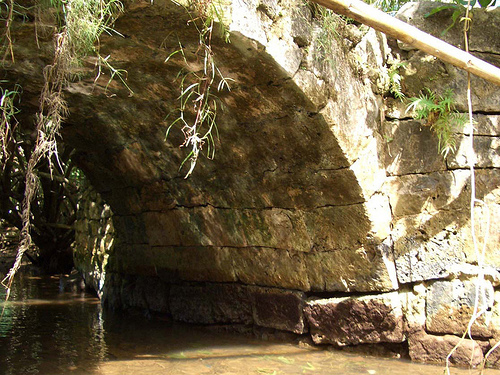 These two stone bridges are reminders of Guam’s Spanish-colonial era. They are a couple of the few remaining bridges built using Spanish stone and mortar construction, and are listed on the Guam and National Registers of Historic Sites.

The Taleyfac bridge, the more commonly known of the two, can still be seen just off the main road south of the main village, and was constructed by Governor Alexandro Parreño in 1785 over Talifac Creek (then called Muja Creek).

Agat Sagan Bisita
The Agat Sagan Bisita, next to the Mayor’s Office, is a series of pavilions lined around a courtyard with a large stage. This facility hosts the Tuesday Night Market from 5pm to 8pm, the Annual Agat Mango Festival and is available for reservations. 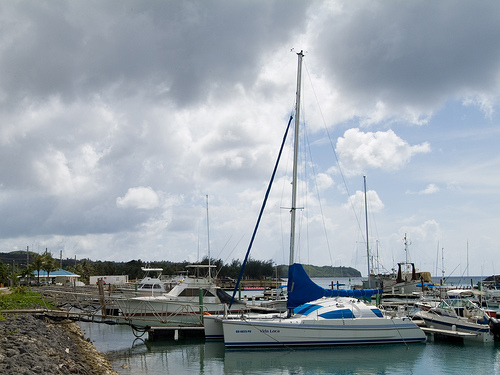 Agat Small Boat Marina
The marina is a modern facility for docking small boats. The facility includes a sea rescue operation, restaurant and icehouse. The marina is a popular location for annual fishing derbies and daily charter fishing trips for local residents and tourists.

Hap’s Reef
Located just off Agat Bay, Hap’s Reef is a popular site for divers and snorkelers to enjoy different marine life. Pilot whales can also be spotted from this location.

Inn on the Bay
A seventy-room hotel completed in 1989, Inn on the Bay offers an array of amenities and guest services.

Mango Festival
The village of Agat held the first annual Agat Mango Festival in May 2007 at Nimitz Beach. The event includes a canoe paddling race, displays, vendors booths, and a mango culinary competition. It is hosted by the Agat Municipal Planning Council and the Guam Visitors Bureau.

Nimitz Beach
Located at the south edge of Agat, Nimitz Beach is a popular public beach and recreational area with pavilions.

Oceanview Middle School
Oceanview is one of eight public middle schools of the Guam Department of Education (as of  2010). It was constructed in 1959 as Agat Junior High School. Later the school was modified into Oceanview High School but has since reverted to a middle school. 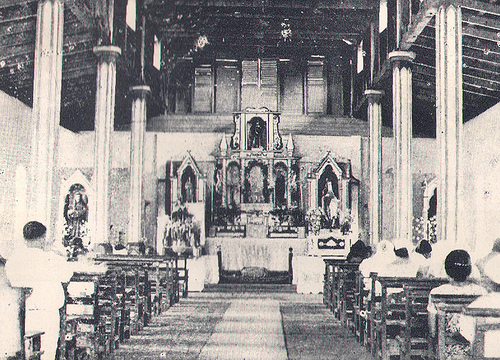 Our Lady of Mount Carmel Catholic Church
Mt. Carmel was first dedicated in 1937. It was rebuilt in its present location after World War II and is the center of village activities. A procession and village fiesta, or feast-day celebration, are held in July for the church’s patron saint, along with a procession for Santa Ana, the patron saint of Christian mothers. The village also holds another procession in honor of Santa Rosa.

Our Lady of Mount Carmel School
This Catholic school, located in the heart of Agat, has pre-Kindergarten to 8th grade classes. In 2007 the threat of a closure loomed because of low enrollment rates, prompting the community and school alumni to rally in effort to keep the school open. Supporters coordinated events to raise funds and pushed for increased enrollment, which kept the school open.

St. Andrew’s By the Philippine Sea
One of three Episcopal churches on Guam, St. Andrew’s, was constructed in the 1960s initially serving as a day-care center, but eventually became a parish.

Southern Christian Academy
This Agat school is one of nearly a dozen non-Catholic private schools on Guam. The school offers courses from preschool to grade 12th.

Population: According to the U.S. Census in 2000, the population of Agat was 5,656. As of November 2010 official census population figures are unavailable.

Village officials: The current mayor, Carol S. Tayama, first elected into office in 2005 is the first woman elected as mayor of the village and is the granddaughter of Agat’s first commissioner, Antonio P. Carbullido, who served from 1930-1934 and from 1945-56. Augustin G. Quintanilla is the vice mayor.

Village description: While many regard Agat as the western gateway to the south, it is also the commercial center of the south. Numerous businesses – from merchants and restaurants to the seventy-room Inn on the Bay – have sprung up in the once-quiet seaside village in the last twenty-five years. Despite Agat’s thriving business center, the old heart of the village that includes Our Lady of Mount Carmel Catholic Church, Convent and School, still exists.

The seaside village of Agat lies just south of Naval Base Guam. The village’s main road, Route 2, meanders through several commercial and residential areas. The road also leads to a group of public buildings, such as the Agat Community Center and mayor’s office and a community library and police station. Farther south, Route 2 runs along the coast of some of the finest beaches on Guam including Nimitz Beach. Nearby is the popular Agat Marina.

The village of Agat is also home to several parks dedicated to the events of World War II. These parks are part of the National Park Service’s War in the Pacific National Historical Park.