Editor’s note: The U.S. territory of Guam is comprised of 19 villages, many with their own distinct character, history and points of interest. Stripes Guam and Guampedia have joined forces to present this weekly feature on each of them in the hopes that it will help our readers get out – and get to know – our gracious hosts. To learn more about Guam’s people, history, culture and places, visit: guampedia.com.

Origin of village name in CHamoru

Barrigada comes from the CHamoru word meaning “flank” (the side of the stomach). The first written mention of the word “Barrigada” comes from Recollect Father Aniceto Ibanez del Carmen, who served on Guam for 40 years and in 1866, referred to people hunting deer in the region called “Barrigadan Tiyan.”

A 1902 map, drawn with the assistance of CHamoru priest Father Jose Palomo y Torres, shows two names for the large hill that dominates central Guam: “Mt. Tuyan or La Barrigada.” Both names fit well with the ancient CHamoru creation story of Puntan and Fu’una, which tells that the island was formed by the body of Fu’una. Both the tuyan “stomach” and the barrigada “flank” are located in the middle of the body.

Little is known about the ancient villages that were scattered through central Guam. However, early archaeological studies on Guam found a large number of latte stones in the region now called Tiyan, which suggests that the area was well-populated. CHamorus were forced out of this region during the Spanish-CHamoru Wars of the late 17th century. However, it was not long until CHamorus started using the area for ranching and hunting, and for grazing cattle.

During the early 20th century, the village was established near the current location of P.C. Lujan school which was surrounded by scattered ranches. Some of the island’s best soil was located at Tiyan, which was ideal for corn. Early in the US Naval Era, a deep well was drilled here to attract farmers to settle. By 1924, there were enough people to warrant the construction of Barrigada’s first school. By 1940, about 875 people lived in the municipality of Barrigada, which at the time also included what is now Mangilao and Toto.

During World War II, the Japanese allowed people in Barrigada to stay in the village and several Hagåtña families moved to their Barrigada ranches during these years. However, these residents were forced to provide food for the Japanese. CHamorus were also forced to help build an airfield for the Japanese at Tiyan. When American forces arrived and secured the western beach heads in July 1944, Barrigada, and its well, were among the first inland objectives. Marines faced fierce fighting on 2 to 3 August 1944 in what came to be known as the “Battle of Barrigada.”

When the war ended, the United States military decided that the old village center would be needed for a military golf course and other military facilities. The village center was relocated to the present location of San Vicente Church where the Navy laid out new streets and lots. San Vicente Church was built in 1947. Many people who had lived in Hagåtña before the war, moved permanently to Barrigada which resulted in a 270 percent population increase between 1940 and 1946.

The newest of all Guam Department of Education high schools, Tiyan High School is located at the site of the former military base in Barrigada. The school is home of the titans.

This Christian school has provided an education to Guam students for more than 40 years, starting as a small independent study program. Harvest Christian Academy began as a ministry outreach of Harvest Baptist Church in 1975. The school teaches kindergarten through grade 12. 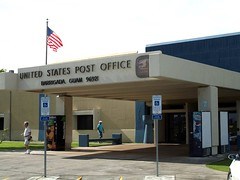 Guam National Guard Readiness Facility
In 2001, the Guam National Guard opened this state-of-the-art facility that houses administrative offices, classrooms, secure storage areas for equipment and weapons and a shopping area for guard members and their dependents.

Sports areas
There are softball and football fields located in Tiyan in what was formerly known as “Naval Air Station Brewer Field.” The area is a favorite walking/running area for residents.

Population: According to the 2010 US Census, there were 8,875 people living in Barrigada.

Village officials: June U. Blas is the mayor of Barrigada.

Village description: Barrigada is a land-locked village located near the center of the island on Guam’s limestone plateau. It stretches from the cliff line overlooking Harmon Industrial Park in the East to Mt. Barrigada in the north. Upscale homes have been developed on Mt. Barrigada, along an area known as Barrigada Heights; overlooking Tiyan, the interior hills of Guam, and the Philippine sea. To the south is the village of Mongmong-Toto-Maite, and to the east is the village Mangilao.

In the past, Barrigada was a popular ranching area for people from Hagåtña. Today, some parts of the village still have a rural feel attributed to the long winding roads that make their way through hills, valleys, dense vegetation, and wetlands. The village of Barrigada is now a heavily-populated residential area bordered by considerable commercial development along routes 8 (Purple Heart Memorial Highway), 10 (Vietnam Veterans Highway), and 16 (US Army Corps Drive). The recently returned former federally-designated land located in Tiyan (formerly the Naval Air Station, Guam) has become the site of some government of Guam offices, private businesses, and residential homes.

Get to know Guam: Merizo Village where water, pride abound

Get to know Guam: Umatac (Humåtak) - Resting place of the goddess

Exploring the depths of Rota's beauty

Busan to Guam flights to resume in April