Editor’s note: The U.S. territory of Guam is comprised of 19 villages, many with their own distinct character, history and points of interest. Stripes Guam and Guampedia have joined forces to present this weekly feature on each of them in the hopes that it will help our readers get out – and get to know – our gracious hosts. To learn more about Guam’s people, history, culture and places, visit: guampedia.com

The origin of the village name Dededo, Dedidu in Chamorro, may come from the practice of measuring using fingers. The Spanish word for finger is dedo. It can be theorized that someone measured out the original village this way. Another possibility is that the word “dededo” is a version of the word “dedeggo,” which means “heel of the foot,” or that it comes from the word “deggo” which means to “walk on tiptoes.”

Village history
The history of Dededo is complicated by the fact that the boundaries of the village have changed considerably during the twentieth century. During the Early American period, the northern half of present-day Dededo was the village of Machanao. Most of Machanao became Andersen Air Force Base and Naval Communications Station, and Machanao is no longer a village, but a section of Dededo.

The pre-war village of Dededo extended further south to include what are now the villages of Tamuning-Tumon-Harmon while the village center of old Dededo was located in present day Harmon between the two-story McDonald’s and the San Miguel Brewery building.

Dededo began in the early twentieth century as an area of widely spread ranches centered in what is now the Harmon Industrial Park. Among the agricultural products of the area were copra, timber, fruits, vegetables and cattle. The village center, which included a Padre San Vitores School (opened in 1929) and Santa Barbara Church were located in the vicinity of the present-day Harmon McDonald’s Restaurant. Fishing also played an important role in the life of many Dededo residents since the village was only a short bull cart or horse back ride from Tumon Bay.

There were also two stores that served the community where residents could exchange farm produce, especially copra, for various goods. By 1941, at the outbreak of World War I, 1,529 people lived Dededo and the surrounding ranch areas of Tumon and Tamuning.

Surprisingly, the village of Dededo made it through World War II intact. Nevertheless, Dededo villagers soon learned that the village was to be bulldozed anyway for the construction of Harmon Field, an Air Force air field. In 1946, villagers began to move to the site of the new Dededo village about two and a half miles to the north in an area previously known as Liguan. It was here that the new Santa Barbara Church was built in 1947.

Throughout the 1950s Dededo continued to be a tight knit community although people began to move away from agriculture as employment became available at the surrounding military installations of the Naval Communications Station, Harmon Air Base, Naval Air Station and Andersen Air Force Base. It was also during these years that Tagalog and Ilocano laborers were being housed at Camp Marbo, directly to the east of Dededo village. Some of these men went on to settle permanently in Dededo when their contracts expired.

Big changes came to Dededo again in November of 1962 and 1963 when typhoons Karen and Olive destroyed most houses in Dededo. The resulting federal disaster aid resulted in a economic revival and considerable immigration of workers to fill needs of the construction industry. The first major housing project in Dededo was the all-concrete 1,500 house Kaiser subdivision on Y Sengsong Street in the mid-1960s.

The next project completed in 1970 was the 1,500-unit Liguan Terrace subdivision. These modern houses attracted Chamorros from villages throughout the island as well as recently arrived Filipino families to settle permanently in Dededo. Since that time each decade has brought new housing subdivisions which are rapidly enclosing former areas of ranches and dense jungle, and this diverse community continues to grow.

Guam National Wildlife Refuge, Ritidian Point
The refuge covers 771 acres – 371 acres of coral reefs and 400 acres of land – owned by the U.S. Fish and Wildlife Service. The refuge also includes 22,456 acres of federally-possessed Guam lands in U.S. Air Force and Navy installations that are classified as refuge “overlay.” It was established in 1993 and receives thousands of visitors annually.

The Ritidian Unit of Guam Refuge has a visitors center with an interactive display of Guam’s birds, several of which are extinct because of the devastation caused by the brown tree snake, an introduced species. Groups can arrange for guided tours to get a taste of Guam’s ancient past. The area was the site of an ancient Guam village and also has several coconut groves remaining from when the area was used during the copra trade. The area is also a popular spot for local families who want to have a weekend picnic or barbeque along the nearly pristine beach and its shores. It is also a favorite spot for fishermen as the area teems with marine life. 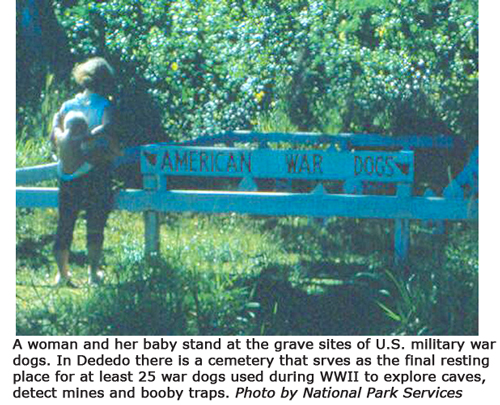 This cemetery is the gravesite for trained military dogs who participated in combat during World War II. The canine burial plots are are marked with small headstones and a plaque.

Coco Palm Resort
Coco Palm Resort, also known as Coco Palm Beach Garden, is a privately owned resort located in a secluded area in Urunao. The area around the facilities is beautifully landscaped with tropical flowers and plants and because it is located along the beach, it gives guests a front-row seat of Guam’s northwestern coastline.

Dededo Flea Market
The flea market is located in Dededo’s Buffer Zone, along Route 1. On Saturday and Sunday mornings, the area is filled with canopies covering the variety of merchandise – from new to second-hand – as throngs of people crowd around in search of bargains. 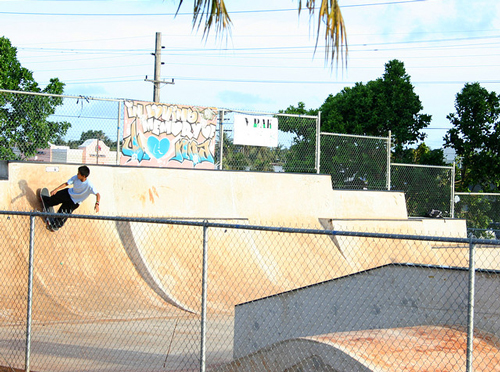 Built with the assistance of U.S. Housing and Urban Development funds this skatepark measuring 11,000 square-feet opened in November 2007. It has several obstacles including cement ramps, steps, hand rails, and a bowl for skaters to enjoy for free and off the streets.

Micronesian Mall and Theaters
Dededo is home to the Micronesia Mall, the largest shopping mall in Micronesia, located at the corner of Route 1 and Route 16 (Army Corps Drive). The two-story mall boasts a department store, nearly fifty shops, an expo hall, a travel agency, the satellite area for the Guam Museum, hair salons, toy stores, movie theaters and about twenty eateries, fast food restaurants, a coffee shop, a specialty ice cream shop, a cookie shop next to a candy shop, an indoor amusement park and arcade, banks and a supermarket.

Sports facilities
Dededo is also the location of several sports-related facilities including the Guam Sports Complex, the Robbie Webber Soccer Field, and the Wettengel Rugby Field.

Starts Guam Golf Resort
The Starts Guam Gold Resort is located along Route 3A, NCS Guam. It has a 27-hole golf course and offers guests hotel amenities, a restaurant, a pool, restaurants and a spa.

Tanguisson Beach Park
The area of Tanguisson is located at the bottom of a cliff in Dededo. To get the beach area visitors will have to drive down a secluded narrow winding road. The park shares its land with the Tanguisson Power Plant toward the southern side of the park, but to the north there are beautiful mushroom-shaped rock formations in the water. A popular hiking spot for locals and visitors is a fresh water sinkhole called the Lost Pond, located toward the northern end of the area. Nearby are the remnants of an ancient Chamorro village.

The main sections of this northern village lie on either side of Route 1, officially known as Marine Corps Drive, Guam’s main thoroughfare. From a small pre-war farming community, it has become a major commercial and residential center

Dededo is home to the Micronesia Mall, the largest shopping mall in Micronesia, located at the corner of Route 1 and Route 16 (Army Corps Drive). Along Route 16 there are several small stores and other businesses that cater to the area’s Filipino residents. Also along this strip is a two-story McDonald’s restaurant, the Guam Power Authority main business office, and the gated Iglesia Ni Cristo Church. Along Fatima Road, off the highway, there are several vegetable stands selling local crop products.

Past the mall, going north there are several housing developments on either side of Route 1 built in the mid-1960s and throughout the 1970s. The cement homes are built close together and were all of the same design. Over the years, renovations were made to the original square design of several of the residences. Some homes expanded vertically while others grew horizontally utilizing the majority of space of the mostly quarter-acre property lots.

Up the road, heading towards Guam’s northernmost village of Yigo, is the Dededo Flea Market which is filled on weekend mornings with anxious shoppers to get good bargains. Further down the road, and across the street is newest addition to the village, the Dededo Skate Park with several obstacles including cement ramps, hand rails, steps and a bowl for skaters. The concrete skate park sits on land it shares with Lencho Park. The whole area fronts highly commuted Route 1.

Behind the park is the area known as “Dededo Village.” It is the village square, where the mayor’s office, community center, public library and Santa Barbara Catholic Church and school are located. This is not the original center of the village, which prior to World War II was located along today’s Route 16, but after the war several Dededo residents relocated further north after the U.S. military used their land to build an airfield, in present-day Harmon Industrial Park. Other families throughout the island also moved into Dededo after the war.

There are several schools throughout the village, a soccer field, a waste transfer station and a golf course. The village has two beaches off its shores. One is Tanguisson Beach, with its beautiful rock formations, in a secluded area located at the bottom of a narrow winding road. There one will find the beach park that shares its space with an island power plant. The other beach is in the area known as Ritidian. Most of this area has been declared a national wildlife refuge.

Get to know Guam: Yona Village - The people's place