This village’s name is probably derived from the Chamorro word puti, which means to hurt or ache.

Piti started out as a small pre-Spanish settlement, with plentiful fishing for the ancient Chamorros. Even after the arrival of the Spanish, Piti remained a small village until the Port of San Luis of Apra (Apra Harbor) near Piti became the chief harbor of the Spanish government.

With the increased presence of other European powers in the Pacific in the early 1700s, Spain ordered the improvement of Guam’s defenses. Between 1720 and 1730, Fort Santiago, a small emplacement with cannons, was erected on top of Orote Peninsula overlooking Apra Harbor.

In 1734, the Spanish opened a new anchorage for ships in Apra Harbor, offering better protection from storms and a higher level of defense than fortifications in the village of Umatac. In 1737, Fort San Luis, with six cannons, was completed on Orote (near what is now Gab Gab Beach) to defend the anchorage. The area near Gab Gab Beach was a part of Sumay village, which is now U.S. Naval Station Guam.

After 1740, most ships began to anchor in Apra Harbor when the wind was favorable, with cargo transferred via small boats to a pier near the village of Piti. From the village, the goods were transported by two-wheeled carts pulled by steer or oxen to the government store in Hagåtña. For many years, the road connecting the pier at Piti to Hagåtña, made of crushed limestone, was the only real road on Guam.

In the 1830s, the Spanish helped plant the first rice paddies in Piti, which continued until after the World War II.

Piti and Apra Harbor played an important role at critical points in Guam’s history. The surrender of the Spanish government and military on Guam to U.S. Navy Captain Henry Glass, for example, took place at Piti on June 21-22, 1898 during the Spanish-American War, with the cruiser USS Charleston and a contingent of U.S. Marines anchored in Apra Harbor.

Apra Harbor became the port for U.S. naval vessels under the new American government, and in 1899 a navy yard was created on the former Spanish crown property at Piti.

In 1909, the American government established the Experimental Agricultural Station in Piti, along the main road to Hagåtña, funded by the U.S. Department of Agriculture.

On Dec. 8, 1941, the Piti navy yard was one of the first targets of Japanese bombing at the start of World War II. Residents of Piti fled the village toward Hagåtña, jamming the main road along with residents of Sumay.

The guns were to have a firing range of almost ten miles and were intended for uses against ships and landing craft. But when the U.S. forces came to retake the island on July 21, 1944, the guns were not fully operational, and were therefore never fired. They remain a site for visitors as part of the War in the Pacific National Historical Park.

Piti Guns
Piti Guns historic remains is one of seven units of War in the Pacific National Historical Park. They are located in the heart of the village after ascending a quarter-mile steep incline. The three guns are Japanese coastal defense guns that had a range of nearly ten-miles to defend against U.S. naval ships and landing craft, but were never used during World War II. 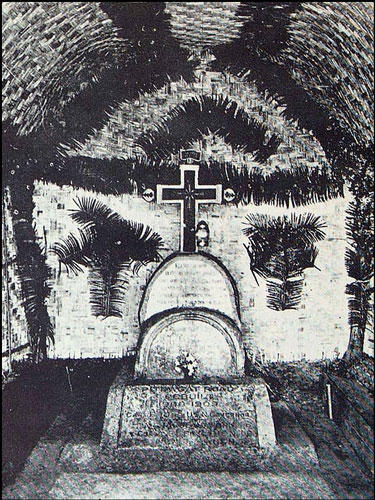 A small shrine with a cross is located near the southern border of the municipality of Piti. On a narrow road in the jungle off Marine Corps Drive, near Sumay Grill, the shrine today has a small shelter for those in the village who make the annual trek to honor the cross. After the Piti-Agat road was rebuilt by the U.S. Navy in 1908-09, the shrine was constructed to bless the road, and the swamp around it is known as “the Swamp of the Immaculate Virgin.”

Atlantis Guam
Just south of Cabras Island off a small peninsula in Apra Harbor is Atlantis Guam, home to the Marianas Yacht Club and Port Authority Beach. Visitors can see the reef and tropical fish up close without getting wet with a 45-minute trip below Guam’s waters on Atlantis Adventures’ 65-foot submarine. Close by is the United Seaman’s Club, an old restaurant and recreation area that was formerly the USO.

Mahogany Forest
Located near the Piti Guns is a mahogany forest. The trees were planted around 1928 as part of the Guam Agricultural Experiment Station established from 1909 to 1932, and agricultural school from 1932-1940. The trees are the broad-leafed mahogany, Swietenia macrophylla, which is native to Central and South America.

Piti Bomb Holes Preserves
This area is part of Piti Bay and is designated as a marine preserve. The Piti Bomb Holes attracts a large amount of fish and other marine life, along with many snorkelers, swimmers and divers. The area is so named because it looks as if craters have been created by bombs, although they are natural coral formations.

This cemetery, located directly across the street from Jose L.G. Rios Middle School covers about eighteen acres of land and is the resting place for U.S. military veterans and their families.

While the Chamorros maintained ranches away from the main village, they often worked for the Navy Department instead of farms as a main occupation. The government set up the agricultural station to encourage farming in an attempt to improve the economy.

The station distributed seeds and plants, and set up school gardens and boys’ and girls’ clubs to teach the Chamorros about effective methods of farming. The plants distributed included hibiscus, which now grows wild in the area. Mahogany and teak were also introduced to supplement native hardwoods, and a mahogany grove still stands in the area.

On April 7, 1917, when Guam received a coded cable message that President Woodrow Wilson declared war on Germany (thus beginning World War I for the U.S.), Piti and Apra Harbor were the site of a confrontation between the U.S. naval officers and the captain and crew of the German ship Cormoran. After agreeing to surrender his men, the Comoran’s captain blew up his ship, which sank to the bottom of the harbor. The Germans were taken as prisoners of war.

The Guam Agricultural Experiment Station was closed June 30, 1932 and was transferred to the island government, to be used as an agricultural school. The school was open until 1940.

The coastline in Piti is lined by two beach parks: Tepungan Beach Park, with newer pavilions, and the Pedro Santos Memorial Park, with an older, large pavilion and unused basketball court. This area of the coast, known as the Piti Bomb Holes, is a marine preserve, where fishing is now prohibited. This prohibition has resulted in an abundance of fish and other sea life that make the Piti waters popular among divers and snorkelers.

Slightly further south, across the road from the ocean, is the New J-Market grocery store and a gas station, just before the Piti Power Plant at the junction of Marine Corps Drive and Route 11, which leads out into Cabras Island. Cabras Island extends into the ocean to form part of Apra Harbor and is further extended by the Glass Breakwater, named after U.S. Navy Captain Henry Glass. On this island is the Cabras Power Plant, the Port Authority of Guam and the Commercial Port. Further out is Family Beach, a secluded recreational spot.

The village proper is located just across from Cabras Island, on the cliffside of Marine Corps Drive. The village is a small residential area with curved two-lane roads and a scattering of homes, many of which date back to the decade after World War II. The village’s most prominent features are Our Lady of the Assumption Catholic Church and the Mike S. Tajalle Baseball Field. The mayor’s office is in a small house-like structure, and the old senior citizen’s center is now being used as a youth center.

The Government of Guam General Service Agency’s warehouse and store, along with the Guam Public School System’s maintenance building are also located in Piti. At the edge of the village is the Jose L.G. Rios Middle School.

Along this same edge of the village is a road that climbs one side of Nimitz Hill, which overlooks both Piti and the neighboring village of Asan. At the junction of this road and Marine Corps Drive is the Guam Veterans Cemetery. Further up the hill is the Vicente Limtiaco/Tiguac Cemetery. On the Piti side of Nimitz Hill is Nimitz Hill Estates, a community of larger houses and condominiums. More homes are scattered along the hillside. A Chamorro music radio station, KISH 102.9 FM, is also located in the Nimitz Hill area of Piti.

Just south of Cabras Island is Atlantis Submarines and another small peninsula that juts out into the waters of Apra Harbor and is home to the Marianas Yacht Club and Port Authority Beach.

South of this peninsula is the largest area of Piti, and the least inhabited. It’s a large area of land, inland from Marine Drive, with a sprinkling of homes, a number of small rivers and mountains and lots of jungle.

Toward the southern boundary of Piti is Polaris Point, another small peninsula that goes out into Apra Harbor and forms Inner Apra Harbor along with Orote Point. The area was named after the Polaris Missile, one of which was stationed on Guam in 1964 as part of a global deterrent system.

Get to know Guam: Water, pride abound in Merizo Village