Get to know Guam: Pago

Located on the eastern coast of the island of Guam, Pago is one of the oldest villages that predate Spanish contact with the ancient Chamorros.  The village

was settled near the mouth of the Pago River, which feeds into Pago Bay, the largest bay on the island; it is also the site of several important archeological investigations.

The village name Pago is likely derived from the Chamorro word pago (pagu), which is the wild hibiscus plant that grows abundantly in this area. The bark of this species of hibiscus traditionally was used to make ropes. The combination of river and ocean resources made the area ideal for fishing as well as plant cultivation including yams, taro and mangrove plants.

According to Chamorro legend, the bay was formed by a giant fish that ate the central part of the island, thus explaining the almost hour glass shape we see today. In the legend, the women of Pago were known to scent and color their hair with lemon peels. When lemon peels were found in neighboring Agana Bay, the women in Agana knew the giant fish had bored an undersea tunnel beneath the island.  Eventually, the fish was captured by the Agana women who wove a giant net from their hair.

During the Spanish reducción in the late 1600s and early 1700s, many Chamorros were removed from their homes and forced to settle in mission villages on Guam. Pago was one of the six villages selected as a relocation point for thousands of Chamorros from Tinian and Aguigan. The reducción effectively removed the Chamorros from their traditional lands and the practices that held much of Chamorro culture together.

With the imposition of Christianity and influences of Spanish, Filipino and Mexican cultures, ancient Chamorro society underwent major change.  In 1856, a smallpox epidemic led to the decimation of much of the population and Pago was abandoned.  Survivors moved to other villages. Today, a drive along Route 4 near the village of Yona provides a breathtaking view of Pago Bay. The shores of the bay are popular for fishing and other recreational activities, and now, the bay is a site for major new housing developments.  Nevertheless the ancient village site remains archeologically significant, giving insight into ancient Chamorro life and cultural practices.

Pago Bay Resort, is located south of the river.  These projects found that the lands bordering the bay on both sides of the river had been utilized during the Latte Period (AD 900-1521), and they revealed new information about the ancient village of Pago, the nature of its occupation and the range of activities traditionally carried out by the people who lived there.

Three separate projects completed on the north side of the river were situated on the accumulated sand deposits that lie southeast of Chalan Justice Monessa Lujan, formerly known as Inalado Road, and the shoreline. The large project completed on the south side of the river included a narrow strip of beach bordered by a limestone cliff with rock overhangs and upland areas developed on a limestone base that formed a plateau and slopes.
While all of the areas had been considerably disturbed in the past, the archeological projects identified scattered pockets of intact cultural deposits dating to the Latte Period.

Exposed in some soils were intact Latte Period cultural features, including an earth-oven, postholes (holes dug in the ground that indicate placement of wooden or stone posts), and prehistoric trash pits, as well as intact and previously disturbed human skeletal remains.  Charcoal recovered from intact cultural features was radiocarbon dated. A variety of stone and shell tools and shell ornaments was recovered and described. Floral and faunal remains were identified, providing information about traditional subsistence practices.

Excavations in a previously disturbed area uncovered a probable limestone latte pillar and capstone. The exposed latte pillar was 0.87 meters (2.9 feet) long and the capstone was 0.24 meters (9.5 inches) thick, making a pillar/cap combination with a maximum height of 1.11 meters (3.6 feet). The disturbed latte elements provide tangible evidence that at least one latte set formerly existed in this area.  But it is likely that the area once had more sets.

Human skeletal remains, which are generally closely associated with latte sets erected along Guam’s shoreline, were exposed in three of the four project areas.  Based on the scattered distribution of the skeletal remains, it could be inferred that latte sets had been built on the sand flat on the northeast side of the river and on the northern edge of the limestone plateau on the south side of the river.

Generally, the individuals had been placed into prepared pits dug into the ground, although outlines of pits were not always visible.  The burials exposed in the sand deposits were preserved in place without being entirely exposed by hand.  Thus, little information about burial practices, or the age, sex, or condition of those individuals was gained.

The previously disturbed human remains exposed at the northern edge of the limestone plateau south of the river were recovered, and they will be reburied on the property. Most of the preserved remains were adults.  The recovered remains included adults and juveniles, as well as males and females.

A zone of stone cobble mounds located along the base of the limestone slope south of the Pago River was interpreted as an agricultural field where yams may have been grown.  A grain of yam (Dioscorea) starch in a soil sample from this zone, as well as yam spines in the soils, provided tangible evidence that the tubers and the vines were once present.

Soil samples taken from the Pago wetland on the south side of the Pago River provided evidence that taro was once cultivated in this area.  Other plants once present in this area included mangrove, breadfruit, coconut, ferns, pandanus and grasses. Seven radiocarbon dates were obtained.  One date with a range of 210-30 BC was not associated with a cultural deposit. Four dates fell within the Latte Period and their calibrated ranges were AD 870-1020, AD 1020-1190, AD 1150-1280, and AD 1290-1420. One date had a range that extended from the late Latte Period into the early Spanish Period (AD 1440-1640). The seventh date was modern, post AD 1950. The dates indicate that people utilized the area from near the beginning of the Latte Period into early Spanish times. 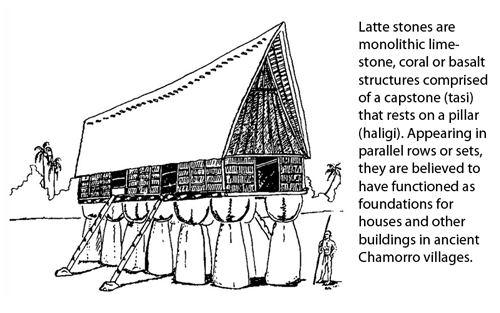 Two probable pieces of ambergris (a waxy substance formed in the intestines of sperm whales) were recovered, providing the first archeological indication that Latte Period people may have been familiar with this material. Ambergris floats on the ocean surface and it sometimes washes up on beaches in the form of irregularly shaped lumps.

The fact that these two pieces, recovered from two different cultural features, appear to have a similar shape, suggests that people may have utilized the substance in some consistent way.  Historic accounts from the late 1700s note that ambergris occasionally washed up on Guam’s shores, but the account did not mention that the material was ever collected and/or utilized.

The postholes and the latte elements indicate that they built houses or other structures, buried their dead near the areas where they made tools, and prepared food.  The food and plant remains indicate that they ate breadfruit, yams, taro, a variety of shellfish including gastropods and bivalves, caught fish, including parrotfish and shark, and captured fruitbat and turtle.

My Paradise: Dive into a great trip to Batangas, Philippines