The original pre-Spanish inhabitants of Talofofo lived mostly in settlements along the Talofofo and Ugum rivers, although artifacts have been found in the Talofofo Caves, perhaps suggesting that people used the caves for shelter during typhoons.

In 1672, Spanish Jesuit priest Father Diego Luis de San Vitores ordered a church to be constructed at the Pigpug settlement near Talofofo Bay, and this church became the center of the new Christian community. 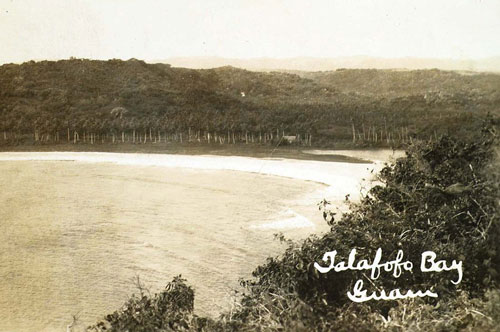 The settlement never grew very large in size or prominence, although Talofofo Bay was the site of a few notable landings. One such landing was in 1788 of a large group of islanders from Lamotrek in the Caroline Islands, who arrived in canoes on a trading mission to obtain iron. It was the first such expedition since inter-island trade had come to a halt due to the Spanish-Chamorro Wars one hundred years before. The Spanish-Chamorro Wars were a series of rebellions by some of the Chamorros against Catholic indoctrination many years before.

After several months, the Carolinians departed for Lamotrek with iron and trade goods, but it later turned out that they never reached home and were probably hit by a storm. Don Luis de Torres, a Spanish-Chamorro military officer, travelled to Woleai in 1804 to reassure the Carolines that their peers had not died at the hands of the Spanish. Carolinians subsequently resumed their annual trading voyages to Guam.

Talofofo Bay was also the site of the eastern landing of Japanese forces during the invasion of Guam on December 10, 1941, when a detachment meant to land at Ylig Bay in Yona mistakenly landed at Talofofo Bay instead. The detachment marched north to Hagåtña to meet the other landing forces.

In April and May of 1944, the American forces first started preparing for the invasion of the Marianas, including bombing raids over Guam and Saipan. On April 8, the submarine USS Seahorse torpedoed the 6,780-ton Japanese converted submarine tender Aratama Maru near the eastern coast of Guam, and the burning ship made it into Talofofo Bay, sinking three days later.

From August 1944 to September 1945, after the Americans recaptured Guam from the Japanese, the military government built the new community of Talofofo in the hills where it now stands.

In the northern part of Ipan, a Flight Personnel Rehabilitation Camp was built in 1945, with a beer garden, softball diamonds, volleyball courts, and horseshoe pitching pits. Later, a salt-water swimming pool was built. After providing for nearly 10,000 officers and soldiers, the camp was devastated in 1949 by Typhoon Allen.

In 1972, two hunters from Talofofo, Jesus M. Duenas and Manuel Degracia, discovered and captured a Japanese soldier named Sgt. Shoichi Yokoi who had been living in the jungles of Guam for twenty-eight years. Yokoi’s incredible story quickly spread around the world. Instead of allowing himself to be captured by American forces in 1944, Yokoi and ten others hid in the hills of Talofofo.

Yokoi was the only survivor, making clothing from the fibers of wild hibiscus plants and surviving on a diet of coconuts, breadfruit, papayas, snails, eels, and rats. He lived in a tunnel-like, underground cave in a bamboo grove not far from Talofofo Falls. After he was discovered, Yokoi became a celebrity, after nearly three decades of seclusion. He died in 1997 at the age of eighty-two.

Talofofo Caves
This series of caves on the side of the cliffs of the main village of Talofofo are famous for artifacts and pictographs of the ancient Chamorros. 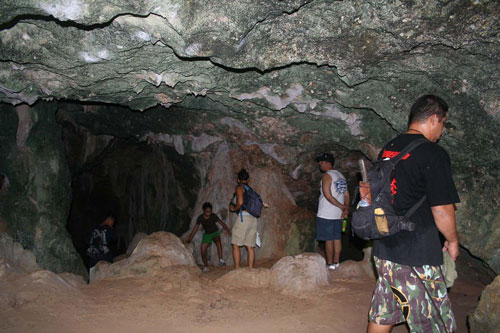 First Beach
Island residents and visitors frequent this area that has about three large coral holes forming submerged natural pools in the waters of a beach located in Ipan just before the entrance to the main Talofofo village. 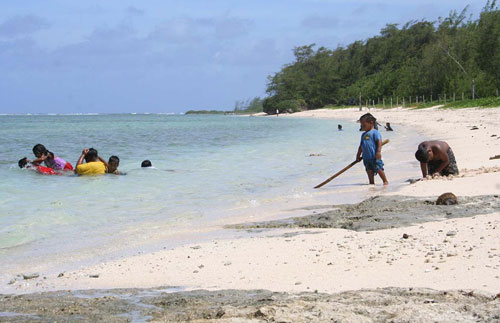 Ipan Beach Resort
Located along Route 4, just past Ipan Beach Park, this privately owned resort offers residents a camping experience. There are several wooden bungalows for rent on the beachfront, a huge pool and restrooms with changing areas. Several local companies and organizations have reserved the space for private parties on the beach. 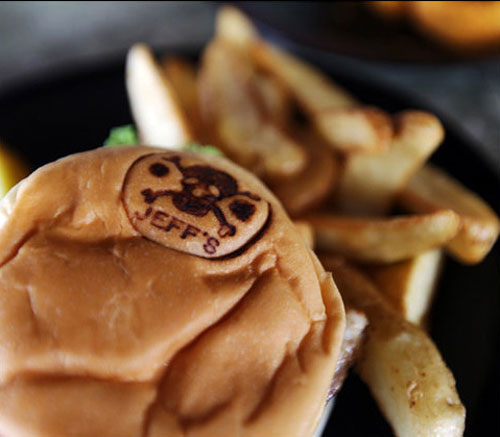 Now a landmark on Guam, this popular establishment features a bar and grill with local food, a gift shop, a small museum, and recreational grounds that has been owned by Jeff Pleadwell since 1979. Numerous concerts have been held there, along with a semi-annual arts and crafts fair, weddings, and other parties. A previous owner was said to have found evidence of Malay pirates having stayed in the area, inspiring the Cove’s name, but in 1962 Typhoon Karen wiped out all traces of the Malay village, including a pirate ship scuba divers discovered in 1953.

Jungle Riverboat Cruise
Scenic boat tours of Talofofo and Ugum Rivers goes to the ancient Talofofo Village, the site of a Chamorro hut and latte stones. Visitors to the site are treated to Chamorro cultural activities and demonstrations.

Onward Talofofo Golf Club
Designed by nine U.S. professional golfers, this course offers spectacular views. It features a relatively flat front nine, with fairways lined by tropical trees, flowers, and water hazards. Hole 6 is designed as a replica of Talofofo Falls and is good for scenic photo opportunities. The back nine is more difficult but overlooks Guam’s tropical jungle and mountains.

Talofofo Falls
Located along the Ugum River, on the boundary between Talofofo and Inarajan, the Talofofo Falls are accessed by a road in Malojloj, Inarajan. At the bottom of the two-tier falls are swimming holes popular among visitors. The falls have been turned into a tourist destination, with a paved road, visitor facilities, and an entrance fee. A replica of Sgt. Yokoi’s cave is nearby, as the original cave collapsed. 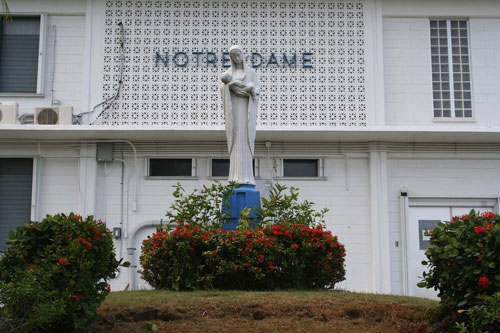 Nestled in the hillside of Talofofo village, Notre Dame High School established on Guam in 1968 by the School Sisters of Notre Dame, is one of three Catholic high schools on Guam, but the only co-educational facility.

Anyone giving directions to a location in this village inevitably starts with this intersection, which is also at the heart of economic activity in Talofofo, with three corner stores doing business near the four-way intersection. North from the intersection is the village’s Catholic church, San Miguel Church, as well as the mayor’s office and houses, most of them similar to homes in suburban communities.

East from the intersection is the Onward Talofofo Golf Course, after which the road intersects with Route 17, locally known as Cross Island Road.

West from the intersection are more houses and Talofofo Elementary School, a sports field, and the Talofofo gym.

South of the intersection is the Seventh-day Adventist Church and Notre Dame High School, and as the road heads downhill toward the Talofofo subcommunity of Ipan and Talofofo Bay, it passes the ancient Talofofo Caves. 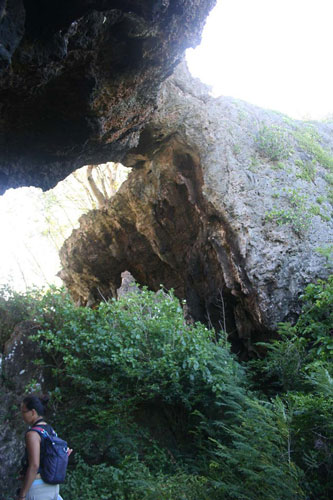 Sitting below the hills of the main village is the coastal community of Ipan, Talofofo. A number of secluded beaches and a scattering of houses, along with a gas station, make up most of Ipan. The area also includes Ipan Beach Park, a popular spot for barbecues. Jeff’s Pirates Cove is located on the northern border of Ipan and has become an institution in the area. It is best known for its relaxed-atmosphere bar and grill, along with a small souvenir store and an outdoor area used for arts and craft fairs, concerts and other gatherings.

Get to know Guam: Discover the beauty of Chalan Pago