The meaning of “Yigo” is unclear. According to some it comes from the Spanish word yugo which means yoke (the type used to secure a carabao to a cart or plow). However, some sources refer to the area as Asyigo which means the home of (a person known as) Yigo. If this is the case, “yigo” may be an ancient word whose meaning has been lost.

During ancient times, Guam’s Northern coast was home to a large number of villages. Evidence of latte dwellings also point to a significant population living in the Mt. Santa Rosa and Mataguac areas. During the Spanish Chamorro Wars in the late seventeenth century, major areas of settlement included Hanom, Tarague, Hinapsan and Upi. Hanom, a fresh water spring on the coast south of Mt. Santa Rosa played an important role as a refuge for the Chamorro resistance during the Spanish-Chamorro Wars.

In August of 1679 Spanish forces along with their allies from Nisihan defeated the Hanom Chamorros. The battle was described as “one of the fiercest which had taken place in the Marianas.”

By the early eighteenth century the population of Guam had been greatly reduced by war and disease and all remaining Chamorros from the northern part of Guam were relocated to six church-centered villages in central and southern Guam (Hagåtña, Agat, Umatac, Merizo, Inarajan and Pago). However, the area remained open to hunters and fishermen.

During the nineteenth century wealthy residents of Hagåtña began to acquire large areas of land in this fertile part of the island. The rich soil proved excellent for cocoa which was used to make hot chocolate, a popular afternoon drink for Hagåtña residents. Other agricultural products that the area was known for were coffee, avocado, citrus and copra.

The area of Upi, now Northwest Field, was particularly important for its cattle ranches while several wealthy landowners established copra plantations along the Northern coast and in the area of Yigo proper.

By the early years of the American administration, some Chamorros chose to settle permanently in Yigo and surrounding areas. In 1912 the first school opened for grades one through four. In 1919 the U.S. Government authorized land use permits for up to twenty-five years to attract more farmers to the area. In 1920, Our Lady of Lourdes Chapel was erected so that the people of Yigo would no longer have to make the long journey to Hagåtña each week for mass.

The new village of Yigo was highly self-sufficient because of its excellent farm lands. However, people still had to travel to Hagåtña to buy household goods. In 1925, Jose M. Torres solved this problem by building the first village store. Torres was a copra trader and would accept coconuts in exchange for groceries. By 1940, Yigo and surrounding areas were home to about forty families spread out over large distances.

During World War II, most Yigo families were able to stay in the area and some Hagåtña families relocated to their ranches in the Yigo area to stay out of the way of the Japanese. However, towards the end of the war, Yigo became the site of a major battle as American forces pursued the Japanese up the center of the island. The final major battle occurred at Yigo on Aug. 7 and 8, 1944 destroying the church and many of the houses of the village.

The end of the war brought many changes to Yigo. The population of Yigo soared during the post-war years as displaced Hagåtña families settled ranch lands in the area and some of the many non-Chamorros who came to Guam as part of the Civil Service and military decided to make Yigo their permanent home. While some villagers continued to farm, the village began to reorient its economy to the presence of Andersen Air Force Base. Since the 1980s Yigo has continued to grow, mostly through the construction of public and private housing subdivisions.

Yigo is now the island’s second most populated village. 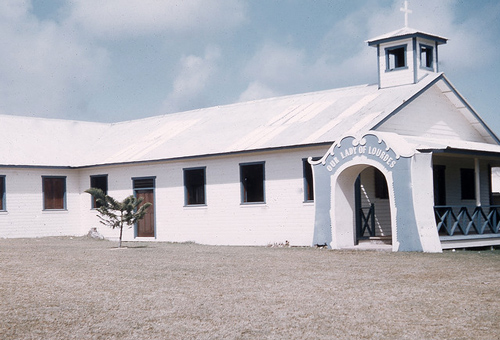 Private Schools
There are also private schools including Trinity Christian School and Dominican Catholic School, which is part of the Archdiocese of Agana Catholic School System.

Department of Defense Schools
Located within the gates of Andersen Air Force Base are the Andersen Elementary and Middle School. They are part of the U.S. Department of Defense (DoD) Domestic Dependent Elementary and Secondary Schools (DDESS) on island for children and wards of active-duty military members, and federal employees hired from the U.S. with “return rights”. The DoD DDESS schools on Guam opened Sept. 29, 1997. 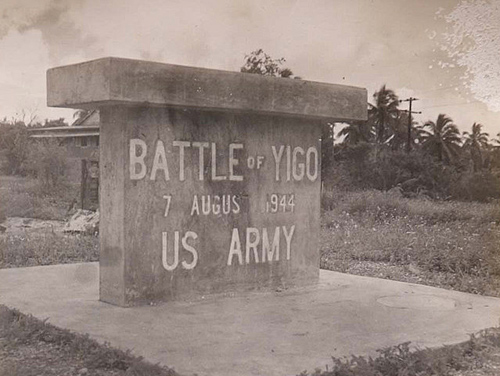 Battle of Yigo Monument
This monument commemorates the final battle of World War II on Guam. As Americans worked their way up the center of the island in early August, 1944, the Japanese fortified their positions around Mt. Santa Rosa. On August 5 the US Army’s 77th Infantry were bombarded with artillery. They finally made it through the Japanese roadblocks and secured the summit of Mt. Santa Rosa on August 8. The memorial is just off Route 15 (Back road to Andersen) and Chalan Lolan, not far from the back gate.

Pacific Peace Memorial Park
This memorial was erected by a Japanese group to commemorate all those who died on Guam during World War II. It is located just off Marine Corps Drive at Mataguac, the site of the last Japanese command post. Although the island was basically secure, General Obata, Commander of the Japanese forces was still holed up in his command post. It was stormed by American troops on August 12, 1944. Rather than surrender, General Obata committed suicide in his bunker.

Mt. Santa Rosa
This is the highest point in Northern Guam. From lookout areas near the summit, one can see excellent views of Guam and Rota. At one point there was a pineapple farm in this area.

Yigo Race Track
Built in 2001, just off of Route 15, this drag strip and off road track is a popular local attraction.

Yigo is the home to Andersen Air Force Base and has secured access to the beaches of the village. Yigo has numerous housing subdivisions that have sprung up in the last three decades, but it still retains a rural feel thanks to its large open spaces and dense forests supported by some of the richest soil on Guam. Like all northern Guam villages, it sits on top of the Northern Aquifer, which supplies about eighty percent of the island’s drinking water supply.

Get to know Guam: Agat (Hågat)

Get to know Guam: Merizo (Malesso') where water, pride abound

The history of hand-cut stones on Guam

Get to know Guam: Umatac - Resting place of the goddess