Get a taste of Japan at autumn! Guam to host annual Japan Autumn Fest Nov. 17

With the cheerful beat of taiko drums, lyrical tunes of traditional Japanese music and carnival foods from the Land of the Rising Sun, Nihonjin Akimatsuri is back! 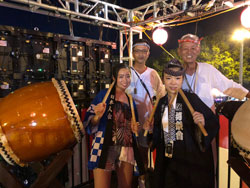 This year, the 40th annual Nihonjin Akimatsuri, or Japan Autumn Festival, will be held 2-9 p.m. on Nov. 16 at Governor Joseph Flores Beach Park, aka Ypao Beach Park. Hosted by Japan Club of Guam, a local group of Japanese companies and individuals, the event draws more than 30,000 people every year, according to organizers.

Traditional “bon odori” dancing is at the core of the festival – literally. Colorful lanterns will adorn the site as taiko drummers and well-trained dancers in summer kimonos perform on a central stage. People will start dancing around the stage – and you should join in. Even if you don’t know how to dance, dancers on stage and around you will show you how to perform the traditional moves. 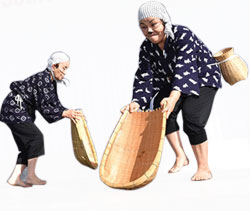 A total of seven stage performances are scheduled this year, along with 13 mikoshi groups participating in the event, according to Satoko Tobe, spokesman of Japan Club of Guam. While some groups have been participating for years, they have many new performers joining the event this year.

“For this year’s festival, we are going to install two large LED screens in the festival site, so that participants who are far from the main stage can enjoy stage performances on the screens,” Tobe said. “And students of Japanese School in Guam will act as masters of ceremony during the first act (2 – 3:30 p.m.).”

To promote a festive atmosphere, organizers will sell traditional Japanese “happi” coats for $40-60 during the festival. However, you can get happi coats for discounted prices ($25-$40) at Japan Club of Guam, Pier Marine [1st floor] and Tokyo Mart in Tamuning until Nov. 15. 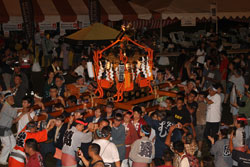 Another main event is the festive parading of “mikoshi,” or portable shrines, throughout the festival. While there will be 13 Mikoshi groups participating from Japan, there also will be three local groups carrying Mikoshi - one made up of children from the Japanese School of Guam, another all women and the last one all men - all raucously moving from one end of the festival grounds to the other gleefully cheering “wasshoi! wasshoi!”

Plenty of food and game booths will also be on hand around the main stage. Stir-fried “yakisoba” noodles, skewered chicken “yakitori,” shaved ice, cold beer and soft drinks are some of the traditional Japanese festival foods that will be offered. These foods will be prepared by local Japanese restaurants and food shops, while drinks have been donated by Japanese and local companies. 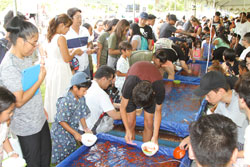 For the kids (old and young), there are game booths to enjoy, from scooping up goldfish, rubber balls and small dolls, to ring tossing, putting a golf ball and shooting hoops.

Since food and game booths will not accept cash, you’ll need to buy tickets at the entrance to the event.

If the weather allows, a fireworks will be displayed during the festival. 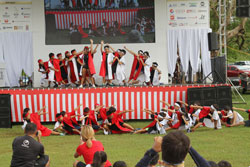 Parking is available at the parking lot across from OKA Payless super market, and a free shuttle service will ferry festival-goers to and from the event every 15 minutes starting at 1:30 p.m. Accessible parking space will also be available at the Hilton entrance, entering from the right side gate to the lower parking near the amphitheater.

The Japan Club of Guam has hosted the annual festival on the third or fourth Saturday of November every year since 1970. Part of the proceeds from the event are donated to the Japanese School in Guam. To show their appreciation, students from the school will give an instrumental performance and sing the Japanese national anthem among other songs.

The Japan Autumn Festival originally started as a small Japanese community event to show their children a typical traditional Japanese festival and culture. It has grown year after year, and today, it is considered the island’s largest annual festival - enjoyed not only by Japanese but a lot of locals and tourists, as well.

In fact, the festival offers a rare glimpse of Japanese culture by condensing a variety of seasonal activities, such as bon odori dancing and mikoshi carrying, into a single event tailored to Guam.

“Everyone is welcome,” Tobe said. “With six months of preparation, we really hope you will join us and enjoy a night of Japanese tradition!”

Scheduled attractions during the festival

May is tourism month on Guam!