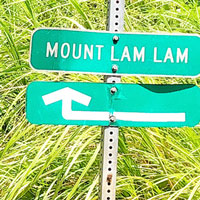 To reach the highest point on Guam, hikers pass through terrain that varies between dense jungle, breezy savannahs, and jagged rocks on a path of red dirt and gravel lined by wild orchids and foliage. The well-worn trail is easy to follow and the summit of Mount Lamlam can be reached in about an hour.

The beginning of the trail is located directly across the Cetti Bay Overlook in the southern village of Umatac. Hikers can park their cars at this overlook. The trail is marked by a sign that indicates “Mount Lamlam.”

As you proceed up the trail, you will notice small white crosses posted along the way. 14 in total, the crosses are a part of the “Stations of the Cross” that lead to Mount Jumullong Manglo. Every year, Guam’s devout Catholics trek up to Jumullong Manglo on Good Friday, the Friday before Easter Sunday on which the Crucifixion of Jesus Christ is commemorated in the Christian Church. Before reaching the top, you will pass by a small grotto where candles, rosaries, and other mementos have been placed as offerings and prayers.

The Fork in the Trail 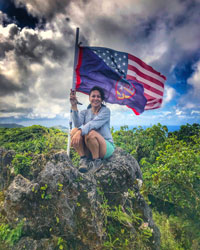 As you near the top, the trail will fork left and right. The trail that bends to the right leads directly to the crosses atop Mount Jumullong Manglo. The trail to the left leads to Mount Lamlam. It’s about a 30 to 40-minute walk from the fork to the rocky peak of Mount Lamlam. Take care whilst climbing up these jagged and sometimes loose rocks. A concrete platform embedded with a Mount Lamlam geodetic marker is at the top of these rocks, as well as a flagpole with a Guam flag and a U.S. flag. There might even be flags from other countries planted there by visitors.

The Top of the Island

Congratulations, you’ve reached the highest point on Guam! Enjoy the amazing views from the top of the island, and share your experience with us by tagging your Mount Lamlam photos with the hashtag #InstaGuam!

Guam’s weather is hot, humid, and unpredictable. Wear loose-fitting clothing that will protect from the sun and sharp swordgrass. Long-sleeved shirt, pants, a hat, and sunscreen are strongly recommended as well as appropriate footwear. Bring at least 2 liters of drinking water and hydrate often throughout the hike. Be sure to inform someone of where you’re going and what time you expect to return.

In the jungle: Trekking to Guam beautiful Tarzan Falls

Guam hikes enjoyable for all ages