Carving is a ancient tradition on Guam and in the Mariana Islands. The craft was used for thousands of years to create utilitarian items as well as body adornments. Pieces like latte (monolithic ancient stone structures with capstones used as house supports), shell jewelry and tools demonstrate the skill of ancient carvers. This skill was important because carving was vital to life in ancient times.

The craft continued to be both utilitarian and artistic through the Spanish rule of Guam beginning the late 17th century. During the second half of the 20th century, carving on Guam moved away from its utilitarian roots and became more of an art form. Modern day carvers, however, continue to incorporate ancient symbols and color and often use ancient carving techniques to create their pieces.

Although the use for carving has changed, the raw materials used has not. Carvers on Guam typically use materials found on the island including stone, wood, bone and shell. Working with different materials also means there are many different carving techniques and styles. While some of these techniques have been updated during the 20th century, many carvers continue to employ traditional techniques in honor of their ancestors.

Carving was an essential craft for the ancient Chamorros. They used carving to fulfill many of their needs including shelter, food preparation and decoration. One of the most well-known icons of ancient Chamorro culture is the carved stone latte. These stone structures were created with two pieces; pillars and capstones carved from land and sea resources, including limestone and brain coral. Basalt tools such as adzes were used to chip the stone while rubble was removed with wooden shovels and by hand. The largest latte can still be found on Guam’s neighboring island of Tinian where some capstones measure more than eight feet in diameter with shafts in excess of twelve feet in height.

Chamorros also used stones to carve objects used in every day living. The lusong (mortar) and lommok (pestle) were typically carved from basalt or limestone. Se’se (knives) were carved from stone as well as bamboo or shells. Slingstones and fishing hooks were also carved during ancient times. Carving was also used to create useful tools. The gachai (adze) was an axe created by carving a wooden handle and using a thick clam shell for the blade.

Many ancient carvers worked with wood. Ancient Chamorros were known as skilled seafarers and their main transportation on the water were carved canoes. European explorers traveling through the Marianas archipelago noted the graceful shape and artistry of the Chamorro canoes. The small crafts were said to have cut through ocean waves like dolphins and fly like birds in the wind. These wooden water crafts, in a variety of sizes, were commonly used throughout the Marianas.

The canoe carving process began with selecting the proper type and sized tree. Many times, carvers utilized the hard ifil (ifit) tree, monkeypod wood, nunu (banyan) tree or dokdok (breadfruit) tree for material. After a tree was chosen and harvested, the bark was stripped and a design was created. Carvers would mark each end of a tree with a V-shape to form the sea-going vessel.

Ancient Chamorros also used animal shells for carving items. Money was carved from turtle shells or Spondylus (spiny oyster) shells. Jewlery was often created from shells found on the beach which are relatively hard and easily workable with stone tools. During ancient times, small disks carved of spondylus were placed on necklaces and represented the wealth and status of a person. This type of jewelry is highly was valued because of the difficulty in obtaining the shells.

Many contemporary carvers in the Marianas produce items that represent icons of Chamorro history. The monolithic latte are no longer carved of stone, but are depicted in smaller wood carvings or as images on plaques. Small models of Chamorro carabao carts, complete with passengers, cargo and tools, and model proas with sailors, paddles and sails made from cloth or other materials are popular. 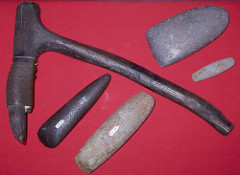 Other traditional items are stories carved into varying pieces of wood. These storyboards range in size and detail, depending upon the artist. Typically the pieces depict an iconic story or legend from Guam’s history. Popular storyboard topics include the Guam legends of two powerful chiefs, Two Lover’s Point, Sirena and the Chamorro story of the creation of the world. 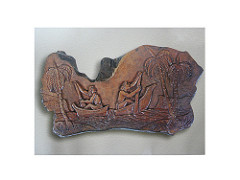 Master Carver Emilio Borja was known for using ifit to carve canoes and spear guns. Borja grew up in Palau (formally known as the Republic of Palau, a nearby island in Micronesia) and moved to Guam in the late 1940s. He was trained in carving by his father. This practice has been passed on to his children and extended family. In 1976 Borja,along with Master Carver Segundo Blas, were commissioned by then-Governor Ricardo J. Bordallo to build a canoe for the bicentennial of Guam. The project took six months to complete.

Blas, another well-known and respected master carver, learned how to build canoes as a youth on Saipan and Palau. Blas was also instrumental in preserving the Chamorro culture, sharing his knowledge of carving skills to a younger generation. In the 1990s Blas mentored and trained Rob Limtiaco and Gary Guerrero as they built their first canoe. The fifteen-foot outrigger, now displayed at the Guam Museum, is the product of a National Endowment of the Arts and Guam Council on the Art and Humanities Agency funded project. 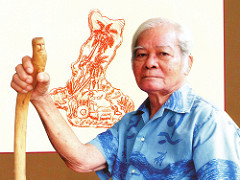 Master Carver Robert Taitano is well-known on Guam for his ability to create wooden ifil pieces for useful and decorative or commemorative items. He is well-known for carving beautiful, stalwart tables and decorative wooden artwork featuring coconut crabs. His carved artistic depictions of latte, plaques and storyboards are often given as gifts to visiting dignitaries to Guam. In 1998, with only a week’s notice, Taitano carved several wooden ifil chairs used to seat political dignitaries during US President William Jefferson (Bill) Clinton’s historic visit to Guam. Two of the chairs were later shipped to the president as a gift.

Taitano is also renown for his production of ifil clocks, backgammon boards, chongka (a game played with shells on a wooden board), cutting boards, ashtrays and other items from local woods. Taitano owns the “Ifit Shop” in the village of Yigo located in northern Guam as well as a shop in the Chamorro Village in the island’s capital, Hagåtña.

Carving of jewelry has also become a well-recognized modern art form on Guam. Many talented carvers create pieces from shell, wood or other natural material with symbolic meanings. Pieces are on display at various art galleries and shops. They typically include iconography from ancient Chamorro society including latte stones or other icons from ocean living including depictions of fish or other animals. Because certain types of shells, including the spondylus, were initially scarce some people import these shells from off island.

Another indicator of how popular the art of carving is on Guam is the “Orange Night, Spondylus Night” event hosted by the Guam Gallery of Art. According to the events organizer, Filamore Palomo Alcon, the event began as a smaller gathering of people who already had spondylus pieces. Since the first event, many people have become interested in carving their own pieces out of spondylus shells.

A look at Guam's remarkable history and resilient people