Land snails of the Mariana Islands

Pacific Islands, including the Mariana Islands, often have many small native snails. Many of the species in the Marianas are unique to the archipelago, or even to only one of the islands. Some of these snails live in trees in the moist and shaded forests, while others live in the moss and leaf litter of the forest floor. Guam has about 100 species of land snails, although about twenty of these have probably been introduced.

In the Chamorro language, land snails in general are called akaleha’. Land snails appear not to have been used as food or used in material culture, given their absence from the archeological record and oral culture. Intriguingly, some snails spread through the Pacific by hitching a ride on ancient canoes and cargo. Archeological research indicates that several widely distributed snails repeatedly show up on islands at about the same time as did the earliest human inhabitants. The same pattern appears to hold true for the Mariana Islands.

The first Europeans to collect the land snails of the Mariana Islands were Jean-René Constant Quoy and Joseph Paul Gaimard, the scientists aboard the French naval vessel Uranie, Captain Louis Claude de Freycinet commanding, which stopped on Guam in April of 1819 during its circumnavigation of the world during the years 1817 to 1820. The only recorded use for land snails was an apparently relatively recent practice–to bead the large and colorful Partula snails into purses for export and sale to tourists. This practice is of uncertain origin, but one that apparently ceased after World War II and as Partula became rarer on the heavily populated larger islands after the mid-20th century.

Land snails belong to two main evolutionary or taxonomic groups, the informal group Pulmonata (formerly a taxonomic order), that is, the lung-bearing snails, and the clade Caenogastropoda (formerly a taxonomic superorder), a large group of primarily marine snails that all retain the ancestral gills of their marine gastropod or snail cousins.

The shell-less slugs are all members of the air-breathing pulmonate family, but several slug groups have independently evolved through the partial or complete loss of their shell. The land snails of the Indo-west Pacific are not at all well documented. In the Mariana Islands, there are about 110 known distinct species, and even a couple of dozen of these still require formal scientific names and descriptions. Many of the Mariana Island species have only been collected from the southern islands of Saipan, Tinian, Rota and Guam. The fauna of the northern islands remains the least known.

The best-known snails in the Mariana Islands are the tree snails in the family Partulidae from the genera Partula and Samoana. The first Partula described from the Mariana Islands, Partula gibba, is the most widely distributed in the archipelago. Another species, Partula radiolata, is endemic to, and still widely distributed within, the largest and southernmost island of Guam. Another species, Partula salifana was discovered in the forests surrounding the summit of Mt. Alifan of Guam. The fourth species, P. langfordi is restricted to the tiny island of Aguiguan. The fifth Marianas partulid, Samoana fragilis, is known from northern Guam and Rota.

Across the Pacific, there is an ongoing and unprecedented rate of extinctions documented for native snail species. Sadly, the same holds true for the snail fauna of the Mariana Islands, where the numbers of nearly all species have declined precipitously during the latter half of the 20th century. Many species have not been seen alive in half a century, some, in fact, not since the publication of their original descriptions. 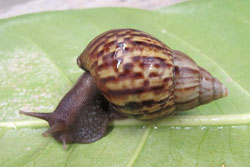 The cause of the declines in the Marianas are primarily due to habitat destruction and the imprudent introductions of generalist predators such as the gastropods snails – Gonaxis species and Euglandina rosea to control yet another invasive gastropod, the agricultural pest Achatina fulica, the giant African land snail. In unparalleled biological irony, these predators, as well as their endemic prey, have now fallen prey to the introduction of the generalist predatory flatworm Platydemas manokwari. The worm appears to have also essentially eliminated the introduced snail predators, but still decimates native species.

The upshot is that the forests of the southern Marianas are now nearly devoid of native snail species, including on most islands the iconic and once prolific Partula. Declines of partulids have been of the order that the two Marianas Partula having the most restricted distributions–Partula salifana and Partula langfordi, are now undoubtedly extinct, and Partula radiolata is probably reduced on Guam to a few thousand animals. Even Partula gibba no longer occurs in vast areas of its formerly broad range; on Guam, it probably exists as a few hundred animals.

As a result of the carnage wrought by the foolish introduction of the predatory worm, the faded, pocked and empty shells of Partula and other snails now litter Guam’s forests. They will soon erode and fragment, such that most evidence of their existence will be gone forever in another decade or so.

Singapore’s forest in the clouds