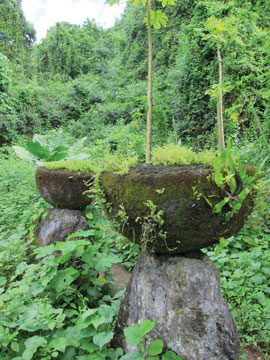 Hidden around a point from bustling Tumon Bay, Guam’s tourist mecca, lies a prehistoric coastal site known as Fafai Beach. Just inland of a beautiful white coral sand beach are the remains of six to eight latte structures or sets. These sets, and the deep midden deposits, are remnants of a prehistoric village of the Chamorro people. The Chamorro are the original inhabitants of the Marianas Islands. The latte upright (haligi) and capstone (tasa) were used as house posts. The latte sets are arranged in two parallel rows of uprights and capstones with numbers ranging from 4 to 14 stone sets. Most latte rise a few feet above the ground, however latte sets have been discovered that measure as high as 12-15 feet. Today, the latte symbolize the ancient Chamorros. Unfortunately, the latte are so popular that they are being taken from their original locations to be used as yard ornaments. Protection of these latte and educating the public about their significance is a priority of the Guam State Historic Preservation Office.

The Torre Water Catchment, constructed around 1916 by farmer Juan Dela Torre, and catchments like it across Guam, provided farmers an opportunity to utilize and live on their own land. Prior to 1898, when the United States took control of Guam from the Spanish, water was collected from streams and rivers, as well as artesian wells. Villages with such water supply systems were historically well populated by the local people and the Spanish. Nearby villages were also crowded because of the close proximity to the water resources. The arrival of the U.S. Navy and implementation of water catchments on Guam brought with it many changes to the island and the Chamorro culture. For those living in villages far from water, from prehistoric times to the early 1900s, life had been shaped by the need to obtain and store supplies of water. The construction of the water catchments provided an incentive for Chamorro villagers to consider long term settlement away from overcrowded villages. The Torre Water Catchment is a partially subterranean concrete pit or tank, with an octagonally shaped exterior and a cylindrical interior. The walls of the catchment are constructed of concrete packed around limestone gravel and cobbles. The houses and outbuildings associated with the catchment are no longer standing and today the structure stands on the perimeter of a golf course.

The Guam Institute, or Lujan House, is one of the few remaining pre-World War II houses in Agana. It was built in 1911 by Jose Pangelinan Lujan, who carried much of the stone used for the walls from the Agana seashore. Mr. Lujan was a carpenter and cabinet-maker of high repute, working as a foreman for the Navy Public Works. When the house was first completed, it was rented out, but when Mr. Lujan married Dolores Cruz in 1917, they lived in it for a short time. Interwoven in the history of the Lujan house is the Guam Institute, the only successful private school of the pre-World War II period. Nievas M. Flores, founder of the Guam Institute, first came to Guam about 1914 and for several years he, along with a Mr. Butler, surveyed the island of Guam. In 1922, he started the Guam Institute in two houses opposite the Lujan House. In 1928 the Guam School relocated to the Lujan House. At first, the Guam Institute taught grades from elementary to eighth grade, but by 1936 it included all 12 grades. Classes were held both during the daytime and in the evening, and many students of the public schools attended evening classes for special tutoring. The school roll averaged between 150 and 200 students who paid a fee of one dollar per month for tuition, later increased to $1.50. From this school, many of Guam’s leading public officials and business men graduated, including Governor Ricardo J. Bordallo, Governor of Guam, Bishop Felixberto C. Flores, Bishop of Guam, Judge Cristobal Duenas, and others. The Japanese invasion of December, 1941, forced the school to close.

The Plaza de Espana was the center of political power in Guam for over 200 years during Spanish, American, and Japanese occupation.

The original Governor’s Palace, which was the principle structure in the complex of buildings and gardens, was built in 1736 during the Spanish rule of Guam. At that time, the Plaza de Espana was named Plaza de Magalhaes and the Governor’s Palace was called the Casa Govierno.

In 1885, during the rule of Governor Don Enrique Solano, the original palace was replaced. Most of the buildings in the Plaza de Espana were constructed in the traditional Spanish style of either wood or manposteria (a combination of rough coral stones set in place and covered with a smooth lime mortar).

In 1898, following the Spanish American War, Guam was ceded from Spain to the United States. The United States continued to use the Governor’s Palace and renovated the building when it was damaged in an earthquake in 1905. During World War II, Guam was invaded and seized by the Japanese military. On the morning of Dec. 10, 1941, the Japanese Special Naval Landing Force began landing at numerous points on the eastern shore of Guam and began advancing toward Agana. The Guam Insular Forces Guard, along with U.S. sailors and marines, took up defensive positions in the Plaza de Espana, forcing the Japanese to halt.

However, resistance soon appeared hopeless and the American Governor, Captain George J. McMillin, USN, surrendered the island to the Japanese in the Plaza de Espana.

During the occupation of Guam by the Japanese, the Governor’s Palace became the headquarters of the Japanese occupation forces until the American invasion and bombardment in July, 1944.

The Governor’s Palace was destroyed during the bombardment, but the original 1736 garden house, adjacent to the Palace, survived and now houses the Guam Museum. The rest of the Plaza de Espana is now a public park.

5 free (and fun) activities to do on Guam

'Localism' in Guam surfing scene something to look out for