When we arrived from Shanghai to Beijing it seemed like we traveled to another country – people, architecture, and the overall atmosphere are totally different. We were supposed to have three full days here, arriving early afternoon on the first day. But apparently China is infamous for delaying flights (both internal and international), so we didn’t get to the capital till 4:00 pm. When the plane touched down, we saw a thin layer of yellowish smog enveloping the entire city.

Unsurprisingly, the unassuming grey architecture and communist signage reminded me of some bits and pieces of Moscow. We got stuck in a terrible traffic jam and didn’t get to our hotel till 6:00 pm, so the only thing we managed to do that day was go out for dinner.

Naturally, next two days were packed with sightseeing. We truly appreciated the history and culture of the city – with UNESCO sites around every corner, it’s full of attractions, sights and areas.

We were also impressed by the vastness of Beijing – of its broad six-lane avenues (in one direction) and expansive gardens. Here are all the details of how we spent our time in the capital of China and the list of top things to do and see in Beijing.

HIKE THE GREAT WALL OF CHINA 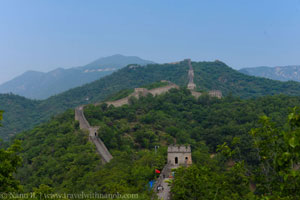 I don’t think a trip to Beijing would be complete without seeing one of the seven wonders of the world. Unwilling to hustle with logistics of the trip, we booked a full day private tour that included visits to the Great Wall and The Summer Palace. When you plan to book your visit to the Great Wall, the most important aspect to consider is which section to visit. In general, there are a variety of options around Beijing – the closest and busiest being Badaling, while the more remote stretches include Jiankou and Simatai, which are quieter but require more effort to get to (and involve vigorous hiking). Our tour took us to a good middle ground – Mutianyu. The latter is a restored part of the wall, and history buffs might argue it is not an authentic experience. Honestly, I don’t think it was any less impressive. Notthing can undermine the fact that you are standing at a site that dates back to 770-221 BC. It was incredible to see the wall on both sides stretch as far as the eye can see – a total of 21,000 km!

In general, the trip should take two to three hours, depending on which section you visit. We left early in the morning, at 8:30 a.m. and arrived at a perfect time – the place was almost tourist-free, and we managed to enjoy the scenic surrounds without having to compete for a spot. To be fair, there were more tourists gathering by the time we left (around 11:00 a.m.) so going early was a smart idea! Going up and down was also quite fun – there is a ski lift bringing you up to the wall, and a toboggan (luge slide) to whizz back down.

TAKE A STROLL IN THE SUMMER PALACE 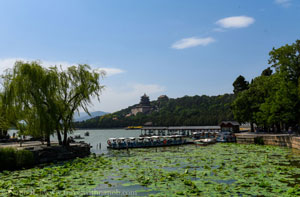 I think this might have been one of my favorite places during our trip to China. Both Justin and I were thoroughly impressed by the expansive grounds of the imperial garden – the largest and most well-preserved in China dating back to 1750. Another one of Beijing’s many UNESCO World Heritage Sites, the Summer Palace is situated around the picturesque Kunming Lake (entirely man-made!). It was the summer retreat of the royal members and was particularly favorited by the Empress Dowager Cixi who didn’t shy to spare a lot of funds and labor to perfect it. The entire Palace spans over 700 acres so you will need sufficient time to explore the area. It is rich with splendid pavilions, halls and temples as well as flawless landscape of natural beauty that exude timeless aesthetic. An elegant stretch of woodwork along the northern shore, the Long Corridor is trimmed with a plethora of paintings, while the slopes and crest of Longevity Hill behind are adorned with Buddhist temples. One of the most impressive features were the Presence of Virtue Temple and the Boat of Purity and Ease – Cixi’s personal project made entirely of marble! I also couldn’t help but note the poetic names of each section of the garden – Longevity Hill, Hall of Serenity, Pavilion of Bright Scenery, Hall of Dispelling Clouds, Garden of Virtue and Harmony, Hall of Moral Glory and the like. 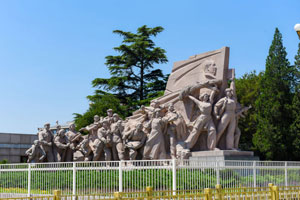 Located right in the center of the city, Tiananmen Square (literally, Gate of Heavenly Peace) is the iconic places in Beijing, with much historical significance. Built in 1651, it is the third largest square in the world. It is here that Mao Zedong announced the birth of the People’s Republic of China and the famous Tiananmen Gate is adorned with his portrait. You’ll see guards constantly parading on this square, and will have to go through a security check point in order to access the area. Entrance is free.

GET LOST IN THE FORBIDDEN CITY 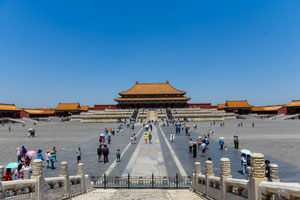 The city within a city, this massive labyrinth of palaces, pavilions and manicured gardens seems to be a maze of worlds within worlds which holds hundreds of secrets and mysteries of the imperial court. Built in 1406, the Forbidden Palace (so called because it was forbidden for commoners to enter during emperors’ reign) was there to follow the move of the capital of China from Nanjing to Beijing. The Palace Museum, or the Forbidden Palace is the historical home of the Emperor of China, having been the center of Chinese government for over 500 years. Declared a UNESCO World Heritage site, it is one of the largest and most well-preserved palace complexes in the world. It is said that there are 9,999 rooms in this construction – number 9 being the number of the Emperor and thus hording great importance. I loved the time we spent to peruse the multiple manicured green spaces where elegant willow trees draped over canals and arching bridges. The vibrant colors and the intricate ornaments of the halls equally stunning and makes you feel like you step back in time.

Please note that you must show your passport to be able to buy an entrance ticket. Forbidden City is closed for the entire day every Monday, except the Chinese national public holidays and the summer vacation from July 01 to August 3. Another important thing to note is that you have to enter Forbidden City from its southern gate (linked to Tiananmen Square) and exit from its northern gate, which is officially set as a one-way south to north travel route. Thus, it makes sense to tour the Tianamen Square first and then proceed to the Forbidden City. 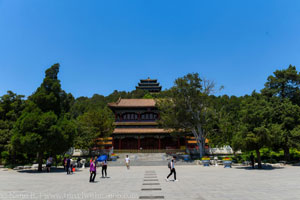 Once you exit the north gate of the Forbidden City cross the street from the underground tunnel and enter Jingshan Park. A 10-minute hike atop the hill will bring you to the pavilion which grants fantastic 360-degree views of the entire city. You’ll be able to get the bird’s view of the Forbidden City itself and be amazed by how much ground you covered. Time your visit to catch sundown reflecting off the gold-tiled roofs!

Beihai Park, literally meaning Northern Sea, is a public park and former imperial garden located in the northwestern part of the Forbidden City. First built in the 11th century, it is among the largest of all Chinese gardens and contains numerous historically important structures, palaces, and temples. Built to imitate renowned scenic spots and architecture from various regions of China, the structures and scenes in the Beihai Park are described as masterpieces of gardening technique that reflects the style, architectural skill and richness of traditional Chinese garden art.

Built in 1420 for the Emperor to show respect to the gods and hold annual ceremonies of prayer to heaven for a good harvest, the Temple of Heaven is a beautiful piece of architecture, and an incredible look into the spirituality of China. The round shape is a symbol of heaven, and the main buildings are formed to replicate this shape perfectly. Full of gorgeous colors, this UNESCO site is located in the south of Beijing and is surely worth your time.

PERUSE THE HUTONG AND NANLUOGUXIANG 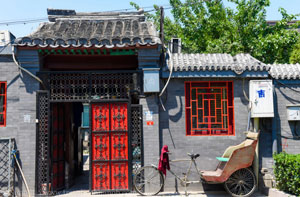 If you want to step into time and get an insight into the Beijing of yesteryear (alas renovated), Hutong neighborhood and Nanluoguxiang street are a good place to peruse. You’ll enjoy the narrow (dusty) alleys with their ramshackle and gray-brick courtyard dwellings. The areas are also seeded with interesting art galleries, trendy shops and restaurants – just like in Tianzifang in Shanghai. 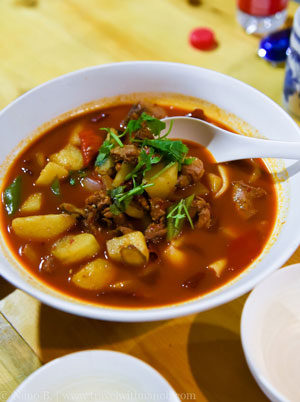 If you care to shop around Xidan and Wangfujing streets – located along the Forbidden City on west and east sides, respectively – are filled with souvenirs shops, designer boutiques and shopping malls. There are tons of restaurants and street food stalls as well, so it might be a great place to enjoy lunch or dinner. 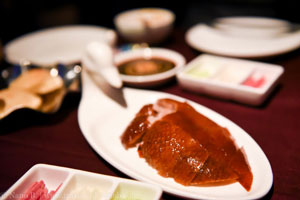 Visit to Beijing is kind of synonymous with eating Peking duck, and there are a lot of restaurants that serve the famous bird. Da Dong seems to be one of the most popular spots in town. It’s worth noting that they have personnel of over 200 people in the kitchen which made us a bit wary of its quality. We opted for two of the smaller restaurants and Duck de Chine located within trendy complex of 1949 The Hidden City turned out to be our favorite of the two. To be honest none of them matched the quality of Lung King Heen in Hong Kong, but Duck de Chine came pretty close and the Peking duck was excellent.

TIPS TO HELP YOU PLAN YOUR TRIP TO BEIJING:

My Paradise: A terrific trip to Taiwan