Recently, my better half and I opted for a whirlwind tour of China’s eastern city of Qingdao, a bustling former German colonial port on the Yellow Sea. We joined a Seoul-based tour of 20.  I was the only non-Korean, though I speak the language somewhat having lived off and on in Korea for quite some time. We crammed a week into a couple of days. It was exhausting, but worth it. 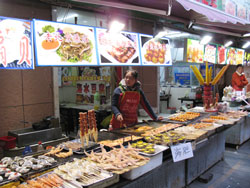 After settling down in our hotel rooms, our guide, Mr. Yang Ho, took everybody over to meander through Pichaeyoon, an old market-turned-tourist-trap crammed with fast-food stalls, loud street vendors, and glitzy accessory stores.  It is one of the few places there where you’ll see a concentration of Western faces, and has pungent smells of greasy Chinese fried foods wafting in the air. I tried a diluted coconut drink for 15 yuan; got ripped off. Foolishly, I had flashed my cash before asking the price, as though I knew the actual cost. The wife threw a dirty look my way. OK, next time …

Next stop: Xinhaoshan Park. It’s 98 meters above sea level, with an arduous trek to the rotating observatory at the top. Careful – no guardrails! I did a midway stop to take a memorable photo or two of the city’s skyline to the west. The park was originally known as Signal Hill, so-named to signal incoming ships to the harbor. Go there at dusk and see Qingdao’s downtown skyline light up like a distant kaleidoscope! 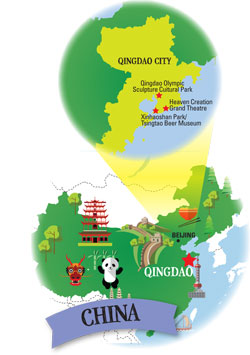 We stayed downtown at DoubleTree Hotel, which is dubbed as five-star. At 5:35 a.m. the next day, just outside our 16th-story window, we witnessed a wild display — of all things! — of fireworks. Short-lived (at about three minutes), it nonetheless scared the hell out of my wife and me. Later, our tour guide explained that it was a special event independent of hotel management, probably generated by some “family event” like a wedding, to augur good luck.

After breakfast at the hotel, we boarded our bus for a one-hour ride to a pearl shop on Qingdao’s outskirts. We listened to a 15-minute spiel on the benefits of wearing (and presumably buying) Yinzhu jewelry. The lecture was delivered in Korean by an attractive Han Chinese woman named Zhang Ling, so my comprehension was limited. (She refused to have her photo taken for this story.) Then everyone mingled around the store. My wife bought some pearl facial cream for us (she doesn’t need any; I do). The store manager tried to lure me into purchasing an expensive pearl necklace for my significant other; I pleaded poverty.

We then hopped back on our bus and headed for the beach and Pal-tae-kwan Park (Eight Great Things), even though it was late in the fall. Obviously, nobody was swimming (Qingdao is 36 degrees latitude), but a lone just-married couple stood posing for pictures on the shoreline. The Qingdao Seaside Walkway is 40.6 kilometers. Here, you can visit anti-communist Chinese Nationalist Chiang Kai-shek’s old vacation home, now a pay-for-view public attraction. Upon returning to the bus, I inadvertently strayed on private premises while searching for a shortcut. An all-black-clad guard wielding a baton popped out of nowhere and ran toward me, hollering at me to clear out. I have visited China before, so I know that Chinese officials can be very loud when dealing with foreigners. I scurried back to the group.

From there, it was a five-minute drive to Tsingtao Beer Museum. Tsingtao has long been famous worldwide; here, you’ll learn its origins. Inside is an exhibition dedicated to the history of beer-making, originally by the Sumerians in ancient Mesopotamia dating back 6,000 years. Tsingtao Beer was founded here in 1903 as the German Naval Brewery. Inside is a holographic image of a beer taster at work, who then spins around to face you while splashing some hopsy drops on a screen. Behind the unknowing spectator, a fine mist (not real beer, of course) is sprayed. People jump.

In the next room, a riotous throng queues up for free beer and nuts. We chug down our own samples, then stroll through the museum where Tsingtao Beer is packaged. On the way, there’s a mini-exhibit recreating what it’s like to be drunk: you go inside a room with tilting floors designed to simulate walking while inebriated. Finally, several escalators lead downstairs to a large room with yet more riotous folks seated by the dozens chugging down yet more samples and heartily munching on assorted snacks. I swill my beer and chomp down on Tsingtao honey-roasted peanuts. A large gift shop and various vendors populate the premises. Soon, we were having lunch at a traditional Chinese restaurant; everything was served on a revolving lazy susan, forcing diners to jockey for servings. Tasty stuff!

Our guide next took us for a rubdown at Yu Dao massage parlor in central Qingdao, the “respectable” spa (so advertised in English in the lobby). No hanky-panky–this was a family tour! Soon, my wife (who was in the same room) was hollering “Apayo!” (“It hurts!” in Korean), and “Ganjirahwoyo!” (“It tickles!”). Helluva beat-down! After 90 minutes, our bodies were putty. 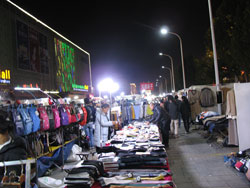 We rode the tour bus quite a bit. (Qingdao’s topography is relatively flat, with steep, rugged mountains to the east.) Arriving at the Heaven Creation Grand Theatre, overlooking the Yellow Sea, we saw a performance of the play Dreaming of Qindao. It’s a glitzy tearjerker of a musical dance and magic show, based on the real-life love story of Michael (American) and Su-jin (Chinese), featuring about 30 classical dancers. The story is told by a deep-throated off-stage Chinese narrator. In this post-Mao era, even Santa Claus makes a brief on-stage appearance!

After dinner, it was on to the Cheongyang Night Market, which showcases everything imaginable: exotic desserts, fruits, footwear, jewelry, accessories, even three adorable gray kittens, which to me were reminiscent of the pets that used to be for sale in front of Osan Air Base Main Gate in Korea, not far from where I live. Just watch your wallet if jostled in this spot; pickpockets frequent the area.

Tour the streets at night here, and you’ll find the downtown area festooned with brilliant red Chinese lanterns. In China, red traditionally is considered a lucky color; even for non-Chinese, it enthuses the spirit. 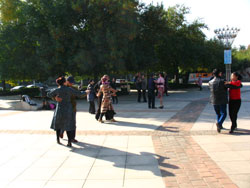 Reveille sounded at 6:30 a.m. the next day; an hour later, we were all aboard the bus. First stop: Yegrin Luxury Jewelry store, featuring all kinds of exotic personal items, most notably men’s specially designed ventilated undershorts (no kidding). Asked if I wanted to buy any, I took a pass. Finally, we toured Qingdao Olympic Sculpture and Culture Park. Most interesting here are the oddly shaped statues of Chinese Olympians in athletic mid-motion flanking both sides of the square. Among them, a bevy of elderly dancers paired off and started swirling to traditional Chinese music blaring out of their music boxes while we boarded our bus for our final ride to the airport.

Qingdao: Eastern China’s hidden gem. If anybody asks you why you’re visiting, just tell them Ron sent you!

– The author has taught English and the Humanities for the University of Maryland Global Campus (UMGC) all over the U.S. Indo-Pacific Command originally since 1996.

My Paradise: A terrific trip to Taiwan