My Paradise: Santo Nino Fiesta experience in the Philippines

My Paradise: Santo Nino Fiesta experience in the Philippines

I recently visited the Philippines for the first time, a trip I’ll never forget as I was fortunate to take part in a local festival that allowed me to fully immerse myself into the country’s culture. 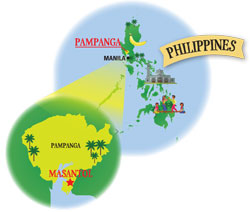 I was cordially invited to the Philippines by Sei Suzuki, better known as Tess Bonifacio back on her home turf of Nikko Park Lodge. Her family members are descendants of one of the Philippines’ revolutionary heroes, Andrés Bonifacio y de Castro (November 30, 1863 – May 10, 1897).  The family not only wanted me to attend, but also play a role in the local Santo Nino Fiesta of Masantol, a small village roughly three hours by car from Makati in downtown Manila.

Masantol is located in the province of Pampanga and lies on the river which bares its name. The majority of locals commute and travel by boat rather than car. The other modes of local transportation are the “three-wheelers” – motorcycles with side cars and tricycle taxis where the passengers ride behind the owner who busily pedals to the customer’s requested destination. The famous Jeepny mini-buses are used by the masses for longer distance travel. Holding up to 28 passengers, it is the responsibility of the one seated closest to the cab area to receive the fare from the other passengers and hand it to the driver. 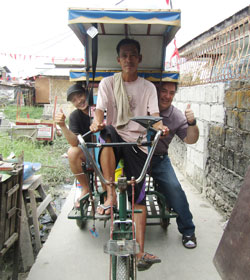 I was told that the Masantol area rarely sees a foreign face, and it would not surprise me if I was the first “gringo” the villagers had ever seen. A poor area, Masantol is home to mostly unemployed squatters living in small huts – albeit many with nice televisions and satellite dishes – along the waterways.

The local market opens daily at 4 a.m. with fresh meat and fresh-caught tilapia, milk fish and other delicacies for sale. A local favorite meat dish is a sweet sausage, which you see drying on strings hung in the open market. Also for sale are every tropical fruit and vegetable you can name, from the “King of Fruits,” durian, to various types of bananas, coconuts and so much more.

On special occasions, such as the Santo Nino Fiesta, locals make a delicious stuffed milk-fish dish named Arelyanong Bangus. Watching the ladies prepare this dish was quite a treat, as was eating it. They deboned the fish and mixed finely chopped carrots, onions and other vegetables in with the meat of the fish and stir fried the mix. Then, they wrapped it back in the original fish skin and put it in foil. When it was time to eat, it was fried in a wok before serving. 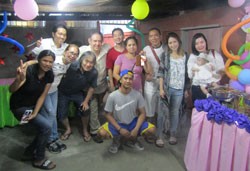 My host family, the Bonifacios, were in charge of the fiesta. Not only were they in charge of the nightly entertainment for the week-long festivities, but the family was also responsible for cooking all the food on the final day of the fiesta. Watching them prepare all the dishes to feed up to 500 mouths was amazing!!! They prepared many of the previously-mentioned stuffed fish, various chicken dishes and many pork dishes, all from locally-bought pigs, one of which was slaughtered before our very eyes while having breakfast!!!

The Masantol Santo Nino Fiesta includes nightly contests where the local villagers and others participate. Each night’s event had its own panel of judges. Events ranged from a talent show to several pageants, a rock band contest and the most popular – a basketball tournament. A Japanese gentleman living nearby who runs an environmental NGO and I were both asked to be judges for the talent show. 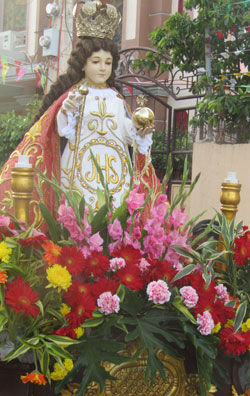 As the crowd enjoyed seeing foreigners on the judging stand, we were also asked to be two of five judges for the beauty pageant. We remained until the end despite the fact it had begun to rain. By the way, when you are asked to be a judge, local tradition requires that you not only accept the honor, but also that you make a donation to said event. It is believed that making the donation will bring you good fortune in the following year; hopefully that is true.

As Masantol is only a few miles from the ocean, full-moon or high-tide nights result in impassable flooded roads where the three- wheelers and tri-cyclers carry many a passenger to dry land.  My last three nights were such evenings. Though we could easily walk to the fiesta grounds, by the time the festivities were wrapping up for the evening, we needed to hitch a ride across the flooded area to dry land which is usually only a two-minute walk.

Each morning I was there, the “village alarm,” as I started to call it, would awaken anyone who hadn’t gone to the market earlier at around 6:30 a.m. And I’m not talking about the roosters singing their morning songs from about 5 a.m. on. No, I’m talking about a marching band, one that seems much louder early in the morning. Upon my asking if this is a daily event, my hosts laughingly explained that this is only due to the fiesta week and does not happen 365 days a year. That was good to know.

The final day of the fiesta featured the Santo Nino statues being paraded through the village as the marching band followed behind, entertaining the masses with their music. Let’s just say the band was much more pleasing to the ears later in the day than at the crack of dawn. 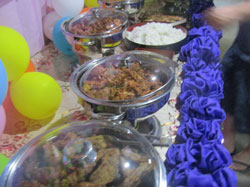 Local tradition dictates that those who have the means should make at least a minimal donation before kissing one of statues for good fortune. Though not Catholic, I figured … “when in Masantol” …

The first arrivals to be fed breakfast on the final day were the local police, who were dressed in full camo and carried machine guns. No, not military, the local police! They happily posed for photos with us as we brought the food out for the fiesta buffet. It was clear that they enjoyed it, as they even thanked me when they saw me strolling around town later that day. They also all came back for another round of delicious food at dinner time.

Needless to say, I was honored to be treated as an insider in such an amazing local festival during my visit to the Philippines. It is definitely not an experience your average foreign tourist can have and I am grateful to the Bonifacio family for the experience.

A Gem of the Philippines: Palawan