The densely forested Made’de hills above Colonia, the only town on the remote island of Yap, were a Japanese stronghold during the Second World War, but their use as a primary lookout point goes back to a time long before the Portuguese explorer Diego DaRocha discovered the island in 1525.

For centuries, the Yapese used the hills to watch for invaders as well as for returning canoes that carried the massive quarried limestone discs from Palau that are still in use today as traditional currency. When the Spaniards arrived on the heels of DaRocha, they built lighthouses atop the hills to guide their ships to the island. Still later, the Germans took possession of the lighthouses and Yap in the 19th century. Toward the end of the 19th century, the famous American trader, David Dean O’Keefe, began using the hills and lighthouses to monitor his ships when he ruled the Micronesian copra trade.

Next to occupy the 100 square kilometer island, one of four states in the Federated States of Micronesia since its independence in 1986, were the Japanese who arrived in 1914 and took over officially. Then, at the Paris Peace Conference in 1919, U.S. President Woodrow Wilson was unsuccessful in his push to internationalize Yap. The islands remained in Japan’s possession for the next 30 years until air battles with the United States ripped open the skies in 1944, the final year of World War II.

Located between Guam and the Philippines, the island became a crossroads for many of the Pacific battles and an essential transit point for air reinforcements as the Allies advanced westward. Using Yap as a strategic naval base during the war, the Japanese military began construction of a primary airfield that same year.

Finishing construction of the large airfield, the Japanese began working on a second airfield when the United States began launching daily attacks in June 1944 that lasted for thirteen months. One Yapese resident who was young at the time recalled several years ago, “They dropped bombs in Yap and [the outer island] Woleai every day until the war ended. There was a Japanese airfield in Yap. Four hundred workable airplanes, fighters, so these American and Japanese had these dogfights in the sky. It was beautiful. I was very scared. Sometimes I was very scared.”

The second Japanese airfield never became operational. The US wanted to make sure Yap remained isolated from the Japanese supply chains and could not be used as an offensive forward operating base. They wanted to keep Yap out of the war, a major factor for success in the rest of the Pacific theatre. Nonetheless, attacks that destroyed much of the island were launched through long-range B-24 bomber raids, carrier raids, ship-to-shore bombardments, and land-based Navy and Marine planes and submarines.

More than 4,000 Imperial Japanese Army and Navy troops were stationed on Yap with thousands more who transitioned through Yap on planes, ships and submarines. When the U.S. Navy arrived, hundreds of Japanese Army troops dragged large guns up the hills, built bunkers and dug trenches and caves to support the gun positions. Numerous air attacks targeted the area, and great lengths were taken to hide gun positions from the American planes.

By late summer 1944, the Japanese were having a hard time resupplying the island. Guns and other materials that were destroyed by the constant attacks could not be replaced so the Japanese took great efforts to camouflage their positions. Often, they held their fire to save ammunition and avoid having their positions revealed and targeted. It was a dangerous job to man a gun position within these hills during the war, as American planes and passing warships relentlessly targeted Japanese gun positions whenever they were located.

Many of the Japanese bunkers on the Pacific islands were so well-camouflaged they could not be identified from air or ground. The bunkers were strategically placed to provide interlocking fields of fire upon attacking forces. Throughout the Pacific islands, the Japanese built underground bunkers, tunnels and passageways to store and move soldiers and weapons across the islands while avoiding Allied bombings.

The network of bunkers on Yap was relatively small compared to nearby islands such as Pelileu, now one of Palau’s states, and the Japanese home islands that included hospitals, power generating facilities, warehouses and factories. The bunkers and caves were mainly used to shelter the Japanese men and their critical equipment from American air and sea attacks.

Japan’s occupation ended on September 5, 1945, when the nation surrendered aboard the USS Tillman (DD-641) in Yap harbor one month after the dropping of the atomic bomb on Hiroshima. The Americans allowed the Japanese to keep their arms and continue to govern Yap for the next three months until the American flag was raised over the island and an occupation government was established.

Despite substantial losses, the battles in Yap are often overlooked. Considered a backwater in the overall Pacific theater, Yap’s strategic importance is undeniable according to Patrick Ranfranz, founder of the Missing Air Crew Project (www.missingaircrew.com) Ranfranz began the Project to find the remains of his missing uncle, T/Sgt. John R. McCullough. One of ten crew members and the assistant Radio Operator on a B-24 Liberator that was piloted by Lt. Gerald Coleman, their plane was shot down on June 25, 1944 and crashed just off the southeast reef.

In 2005, Ranfranz arrived in Yap intent on finding the remains of the fighter plane that his uncle died in. Partnering with the Yap Visitors Bureau (YVB), he began to research and locate the downed planes and sites that still littered the island, many of them long forgotten and hidden in the vegetation or amid the mangrove trees at water’s edge, and on the surrounding reef. Working together, they recovered the planes and erected 13 monuments around the island with permanent plaques that tell the story of the planes’ crews and missions.

Then, in 2017, wind turbines were installed atop the Made’de hills. While clearing the land, Japanese military guns, bunkers, caves and trenches were uncovered in the forest. A testament to that time and a significant part of the centuries-long story of the ancient hills, a movement to preserve the sites and open them to the public was initiated. The plan includes protecting and maintaining the properties with environmental safeguards while making them accessible to visitors. Drones are being used to identify access paths that will assist in developing walking trails in the area.

Five new memorial signs have been erected at the Made’de sites thanks to the generosity of Ranfranz and friends of the Missing Aircrew Project. 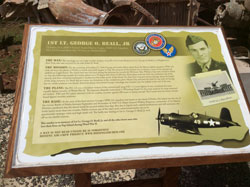 “We are very excited about the discovery and opening up of these important sites,” said Don Evans, general manager of the Yap Visitors Bureau. “They add a new dimension to the stories of Yap during World War II. We are now working with several tour companies that specialize in group tours focusing on World War II and hope to add Yap to their Pacific itineraries. We’re proud that our efforts restoring and maintaining the remnants of the war here on Yap are considered by some to be among the best in the entire region and we hope more people from both Japan and the United States will come here to remember those who fought so valiantly.”

The Yap Visitors Bureau continues to maintain the memorial sites, welcoming visitors who are interested in the history of the war in the Pacific, as well as relatives of the many men who fought there. “We cut the ribbon on the newly opened Japanese memorials during Yap’s annual Summer Festival in June 2018 when we celebrated 30 years of diplomatic relations between Japan and FSM,” noted Evans.

“The memorials on Yap Island immortalize the forgotten and bring meaning to their sacrifices,” added Ranfranz.

Diving into the history of Micronesian island of Yap

Diving into the history of Micronesian island of Yap

10 things you must do in Hong Kong