Circus returns to Guam with a brand-new production!

(Tumon, Guam – May 12, 2022) – Pacific Islands Club (PIC) Guam is bringing the Super American Circus back to Guam with a brand-new production combining a traditional circus spirit with a unique modern show. The Super American Circus at PIC will be an added entertainment attraction at PIC Guam and is scheduled to have its grand opening on Friday, July 1st, 2022.

The circus will take place under the resort’s big top, the Pacific Pavilion, nestled in the heart of PIC’s award-winning waterpark. Tickets for the July 1 grand opening and July showtimes will be available for purchase very soon at this website.

“Bringing the Super American Circus here to PIC underscores our commitment and dedication to restarting Guam’s tourism economy,” said Ben Ferguson, General Manager of PIC Guam. “We believe that this was the best time to invest in this all-new attraction that will be staged at PIC for a multi-year engagement. Countries like Japan and Korea are beginning to open, and we look forward to providing Guam’s visitors with a new and exciting attraction when they return to Guam. Everyone loves the circus, and this will be a wholesome and exciting treat for the entire resident and visitor community.”

The Super American Circus at PIC takes audiences back to the nostalgic times of the circus era that brought together performers from all corners of the Earth. With modern technology and dynamic circus acts, the 90-minute show will mesmerize and have audiences thoroughly entertained and engaged from start to finish.

“The Pacific Pavilion, Guam’s big top, is the perfect venue to host the show,” said Cornell “Tuffy” Nicholas, show producer. “The Super American Circus performers and I are excited to have found a home here at PIC and can’t wait to wow the residents of Guam and visitors from all over the world.”

Ferguson added, “This was an opportunity for us to bring back something exciting for both the tourism industry and our community. We are excited and ready to open the doors of this new and spectacular show, which we know everyone will enjoy.”

About The Super American Circus

The Super American Circus all started with its legendary show producer and promotions veteran Tuffy Nicholas. As the son of a ringmaster for the Ringling Brothers Circus, he has been a successful producer and promoter of circuses, concerts, festivals, and sporting events around the world for over 35 years. Since 2000, as president and CEO of Global Entertainment Productions, Mr. Nicholas has produced over 5,000 performances around the world – Moscow State Circus, Modern American Circus, and the International All-Star Circus, to name a few. In 2005, he produced Cirque Hawaii, a multi million-dollar, state-of-the-art, permanent theatrical spectacular that showcased the award-winning talent of more than 35 performers from around the world and thrilled Hawaiian audiences.

The Super American Circus at PIC, a traditional circus with a modern twist, is a fast-paced 90-minute show that entertains audiences from start to finish. The show features performers from around the globe experienced in thrilling audiences of all ages. For more information about the show, visit here  or call 671-864-9425.

PIC is the largest hotel property on Guam. PIC opened in 1980 and includes 777 guestrooms, 7 food and beverage outlets, an amphitheater, a swim-thru aquarium, and a 10-acre waterpark. PIC is owned and operated by P.H.R. Ken Micronesia, Inc. For more information, visit here or call 671-646-9171. 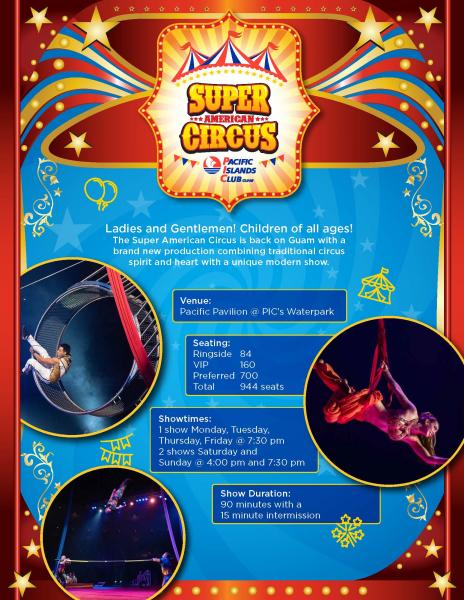 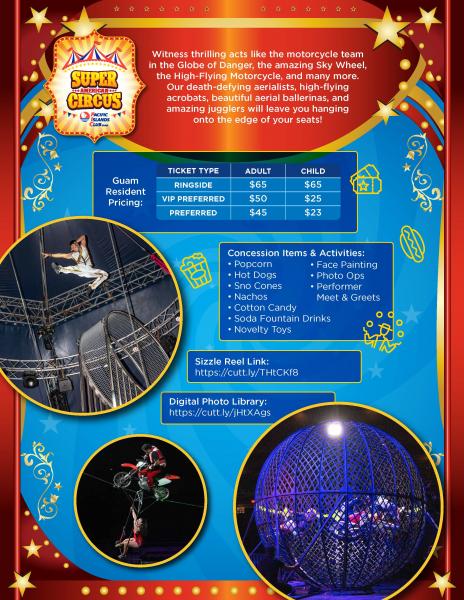 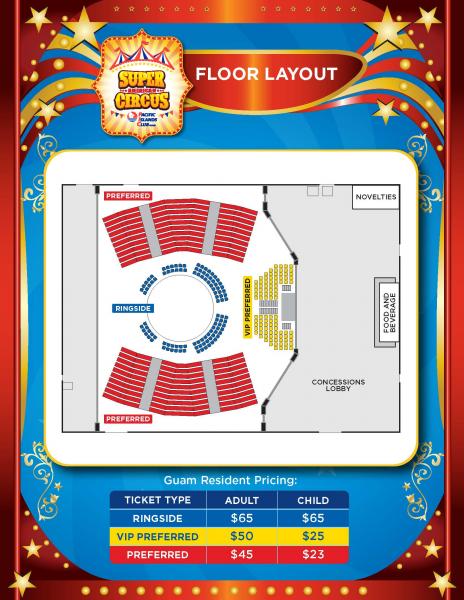