T-shirts are a valuable commodity on the small, remote Pacific island of Yap, and secondhand t-shirts are often more prized than new t-shirts. Ordered from used clothing dealers in the U.S., they arrive throughout the year in large cardboard boxes on supply ships for delivery to the small shops scattered around Colonia, the island’s only town.

One of four island states in the independent country of the Federated States of Micronesia and located in the far west of the Pacific Ocean, the state of Yap is made up of four large islands, seven small islands and 134 atolls with a total land area of only 45.6 square miles. Just 18 of those islands and atolls are inhabited.

Tossed like pebbles from Poseidon’s hand across 100,000 square miles of ocean, the total population is a little over 11,000 of which 7,000 live on the main island. Few tourists make their way to Yap every year, but those that do are greeted with some of the best diving in the world in the protected reef, a locally-produced beer named after the massive wheels of stone money that are used for traditional currency, and a warm welcome from the people who live here. 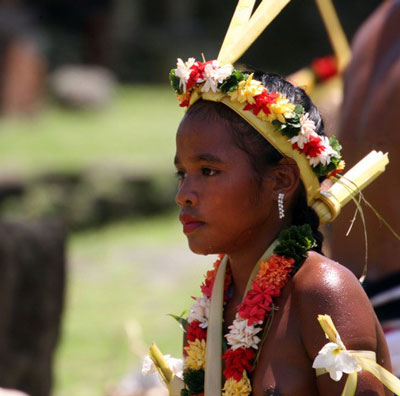 Known as one of the most intact cultures in the entire Pacific region, traditions run deep but the modern world is also a part of everyday island life. That’s where the t-shirts come in.

After sorting and inspecting the bundles, the brightly colored shirts bearing the logos and slogans of all manner of products and enterprises are folded and stacked in piles or put on hangers that customers flip through to find just the right addition to their wardrobe.

Slogans and brand messages are secondary unless a teenager finds one for a rap artist or movie hero. But heat-stamped versus screen-printing is another matter. Heat-stamped images are heavy and hot in a climate where the year-round temperature is usually in the 90s with humidity to match. And, the embossed designs crack, slowly peeling away from the cotton fabric. Screen printing is the hands-down crowd favorite for long-lasting wear. 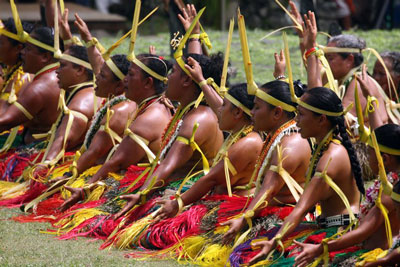 Everyone sports a t-shirt from baby to elder. At work. At home. At church. At school. At funerals. At parties and celebrations. Friday night at the Pine Bar & Grill for dancing, downing Bud Lights, and carousing. Even the women from the outer islands who usually go topless, a perfectly acceptable state of attire – or lack thereof – pull on t-shirts at times. Want to get everyone out for a walkathon around the lagoon to promote a cause like good health or anti-corruption? A new t-shirt with the local sponsors’ slogans and logos will do the trick.

I recently noticed a man who has a high position in the government wearing a shirt bearing the logo of the University of Missouri’s engineering school. Having graduated from another college in the same town, I asked if he had attended Mizzou. “No,” he smiled, “I just found it at one of the local shops.” 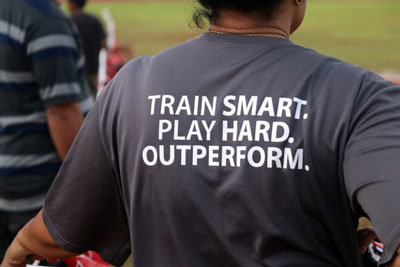 But sometimes the messages, worn out of context, offer a moment of amusement.

Driving a few miles north of Colonia, the only town on the 38 1/2 square mile island, late one afternoon for a meeting at the community house in the municipality of Tamil, I bore right off the island's only paved road onto the secondary road. Secondary roads in Yap are pitted with potholes that create a slalom course for the driver. This particular road is somewhat easier to navigate than most because it’s surrounded by hills and valleys of orange clay. The tire tracks in the clay’s dust of previous drivers show the way around the deeper craters that need to be avoided. The speed limit in Yap is 20 miles per hour, but on the secondary roads that would be considered reckless driving. 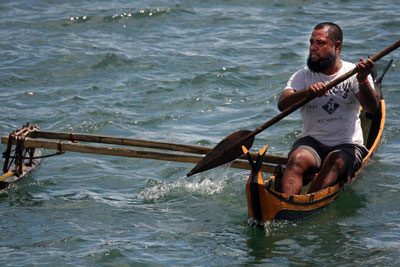 As I slowly turned the steering wheel first over here and then over there, attempting to follow the path of previous drivers but not always succeeding, I noticed an elderly man walking along the side of the road in the same direction, a walking stick in his left hand, his basket containing his betelnut in his right hand, wearing a thu’u, flipflops and a sleeveless t-shirt as orange as the clay that he walked on. The screen-printed, fading message on his t-shirt, elaborately decorated with a road map, read “Take Your Kicks on Route 66.”