Take off your watch and head to Yap

It has “the smallest airport on earth”; “a thrill-seeking shark feeding dive”; and “mantas, mantas and more mantas.” These are responses of travelers who

have visited the tropical island of Yap. Just an hour and a half flight from Guam, it is Micronesia’s best kept secret.

Whether you are a scuba diver needing a cold creamy “manta” ice cream shake; a snorkeler or diver hunting to glimpse a shark or Yap’s famed manta rays; or a parent in need of an escape with or without the kids, Yap has it all.

It is just 450 miles southwest of Guam. You can depart at 6 a.m. and be on the dive boat by noon. The temperature is consistent with that of Guam, averaging in the mid 80s during the day and dipping to the mid 70s on breezy nights.

Traveling to Yap is like stepping back in time. It is no place for television junkies (there is no TV there). Yap is for adventurous outdoor types or those who want to catch up on some reading while watching the ocean waves drift by. You will experience some of the best diving in the region, eat to your heart’s content and experience a new culture – all to the rhythm of slow-moving island days.

Yapese is the native language but English is commonly used. The currency of choice is the U.S. dollar, unless you have some stone money handy. What is stone money? It is an island mystery. They are carved circular pieces of limestone with a hole in the center of each, ranging in size from 2 inches to 8 feet in diameter. With no commercial banks on Yap, the money is kept in the center of the villages.

The value of each piece depends on the story behind it; the lives lost transporting it over long distances. Villagers traded stone money for land, food for feasts, well-needed canoes and gave it to other villages as payment for assistance in times of war.

On Yap life is different. Villagers gather in two areas for social events. The first is the “p’eebaey,” a building roofed with coconut rope and built with large wooden poles and beams on a stone platform. It is used for meetings of the elders, cultural schooling and the occasional wedding. The second is the “faeluw,” a fisheries building for men only, built close to the water’s edge.

Explore village life via a cultural tour along long narrow rock paths lined with colorful tropical flowers and fruit trees. Called village footpaths, or “Kanaawoq,” they lead to the center of each village. The Kanaawoqs connect all of the villages together, creating an island-wide network.

There are many styles of dress on the island. You will notice everything from a grass skirt made from hibiscus fibers or coconut and banana leaves, a wraparound banana-fiber skirt or its modern-day cloth counterpart. Don’t be surprised to see topless elder women with a flower “lei” on or a male in little more than a loin cloth.

For those looking to keep busy, there’s snorkeling, surfing, boating and sport fishing. Explore the land on an eco tour, go kayaking, scout out War relics or jump off the top story of an old schooner dubbed The Mnuw. But don’t forget scuba diving.

This past year, “Sport Diver Magazine” rated Yap as one of the world’s top three dive destinations as well as calling it “the most interesting island in Micronesia.” What makes Yap popular for tourists – especially divers – is the manta rays. You will spend your dive days watching the mantas at their cleaning station and all over the ocean gliding though the water effortlessly. It will induce a calming sensation. Divers in search of a little more excitement can head to the Vertigo dive site for the shark feeding dive, with more than 30 sharks in the area.

Now get ready and take off your watch off, you won’t need it in Yap. They’ll tell you when it’s time to catch the plane back home.

Mogethin!
(Hello or Welcome)
Yap, known as the Land of Stone Money, is a wonderful mix of past, present and future, where an ancient culture exist side-by-side with the 21st century.  I

n Yap, we like to say ‘there are no tourists, only new visiting friends’, so come and visit Yap as a new friend.

Visa and Entry Formalities
There is NO VISA requirement to enter into Yap, except a valid passport within 6 months period, and a round trip airfare ticket.

Current Population:
Yap Main Island is about 8000, and the Outer Islands is about 4000 so the whole State population is about 12000.

Official Currency:
US dollar is used in the stores, but Yap has its own ‘Stone Money’ that is used only for traditional exchanges.

Official Languages:
English is the official language that is spoken almost everyday, but there are four (4) other main languages spoken such as Yapese, Ulithians, Woleaians, and Satawalese.

Political Status:
Yap is a democratic type of political system with the Freely Associated with the US Government.

Travel Time / Distances:
There are only two ‘gateways’ into Yap;
(1) Guam is about an hour and 20 minutes away, and
(2) Palau is about 45 minutes away. 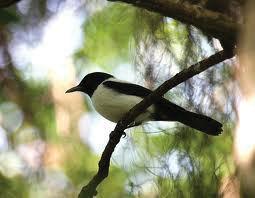 Gigiy, the Yap Monarch is found only on Yap.

Among Yap’s birds species are two endemic ones: The crisp
black and white Yap Monarch and the Yap Greater white-eye,
species likely to be raised to full endemic species status.

This story was originally published in Stripes Guam on June 8, 2008.

Puntan Dos Amantes and the tale of the two lovers statue

Melt away the winter in Alaska