Editor’s note: The U.S. territory of Guam is comprised of 19 municipalities, or villages, many with their own distinct character and local flavor. They range from the larger more populated villages of Yigo and Dededo in the north, to their smaller rural counterparts like Merizo and Umatac on the island”s southern tip. Here are some of the more popular villages to help you start exploring. 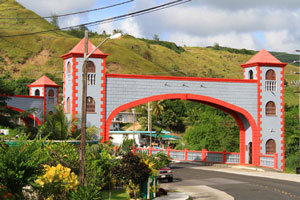 The small village of Umatac is located in southern Guam along Umatac Bay. The community of Umatac is relatively smaller than others on Guam and made up of a handful of residents, many of whom are related to each other.

Interspersed between old houses that sit along the bay’s shoreline are ruins that have become prominent reminders of the Spanish colonial era in the village. Plaques are placed throughout the village that describe the Spanish era to visitors. Remains of the Spanish times include the former Spanish governor’s residence, the site of the old San Dionisio church and several Spanish forts and a battery.

A bumpy two-lane road runs through the center of the village, and visitors coming down into Umatac from the steep hills in the north will first notice stones placed into a hillside in the shape of the island of Guam, welcoming them to the village. A couple of small stores and the San Dionisio Church, built at its current location in 1939, sit along the road.

The road, with houses built in the first half of the last century, then opens up into a spectacular view of the bay before coming to a small park with a children’s playground built by IT&E in the 1990s. Adjacent to the park is the mayor’s office, right on the beach, with perhaps the best view of any mayor’s office on Guam.

At the center of the bay is an obelisk monument to Ferdinand Magellan’s landing in 1521, bearing the inscription, “Magellan landed here.” The bay is also home to some of the island’s best surfing.

The road then crosses the Umatac Bridge, constructed with towers reminiscent of London Bridge. The bridge dates not back to the Spanish times, as visitors often assume, but to the 1980s under the helm of Governor Ricardo J. Bordallo.

After the bridge, the road runs uphill, where visitors can turn off into a small park to see the ruins of Fort Nuestra Senora de la Soledad (commonly referred to as Fort Soledad), constructed to protect the bay from pirates and other European explorers. South of Umatac is the village of Merizo.

North of the main village and within Umatac’s boundaries is an overlook to Cetti Bay, a beautiful secluded beach that can only be reached by hiking or sailing. (Source: Guampedia)

Village pride is evident in Mangilao where each side of Route 10 is lined with local murals depicting island life.

The village is home to Guam’s largest secondary educational center, The University of Guam, located in the heart of Mangilao. Notable features of the UOG Campus are the Planetarium and the UOG Fieldhouse, one of the largest indoor venues on Guam.

Many students live in this area, including Micronesian islanders, making Mangilao a culturally diverse village with a mix of houses and apartments. 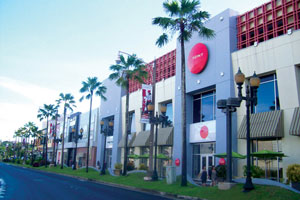 The most traffic by cars and persons on foot will be found on the streets surrounding Tumon Bay. This combination hotel row and retail section is a village of residential streets as well. Inland plateaus have been cut away from the descending hillside to form Marine Corps Drive and surrounding real estate as well as the Tumon strip. These two main drags provide access to the majority of the shopping and entertainment on Guam.

Tamuning- Tumon is bordered by Dededo to the north. Marine Corps Drive, Route 1, and Army Drive, Route 16, creates a junction at the popular Micronesia Mall. This marks the beginning of the Village of Dededo traveling north on Route 1. To the south, the Villages of Agana and Mongmong border at the junction of Route 1 and Route 8.

Within these boundaries are numerous Asian restaurants and bars, the international hotel chains, and the Guam Waterworks Authority. John F. Kennedy High School resides at the top of the hill in Tumon. Several car dealerships call this stretch of Marine Corps Drive home as well. Though predominantly tourist-oriented, many residents live in houses and condos overlooking Tumon Bay. 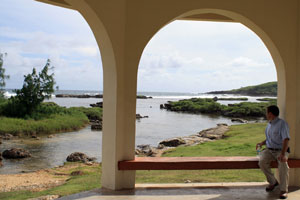 Going into Inarajan is like taking a step back in time through Chamorro history. It remains one of the most untouched by change, even being listed in the National Register of Historic Places in 1977.

To really feel like you have stepped back onto an ancient island, stop by the Gef Pa’go Cultural Village, where you can walk through an ancient Chamorro village, compete with thatch-roofed huts and demonstrations of traditional arts and crafts. Among the most popular sites in Inarajan are the natural ocean side pools, aptly called, Inarajan Pools.

Inarajan, and most of the villages farther south, are considered rural because it is easily 40-60 minutes from any major shopping areas. In Inarajan there is a gas station, a U.S. Post Office, and a public health clinic. 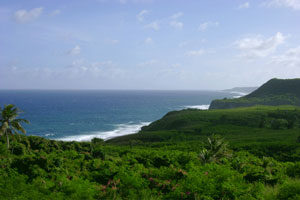 The southern part of Guam is what most people imagine an island being like — sparsely populated with beautiful rolling hills and ocean views. The village of Yona is no exception. Check out Tagachang Beach for proof.

Yona (pronounced Joan-yuh) is the first southern village you will come to on the eastern side of the island. It is also one of the largest villages on Guam. While it is mainly a residential area, there are some interesting attractions.

There is the popular LeoPalace Resort with plenty of outdoor activities; locals enjoy going there to bowl, sing karaoke, and play golf. Golf enthusiasts can enjoy a selection of golf courses in Yona, including Country Club of the Pacific and Windward Hills Golf Course.

Another interesting place to visit is Hamamoto Tropical Fruit World, a 50-acre fruit utopia with more than 70 varieties of tropical fruit. Take the tram ride through the jungle for $12 and then for $15 you can try all the fruit you have learned about on Fruit World’s lavish fruit buffet.

In the main village, there is a Mobil gas station as well as a 7-Day Market for quick, although sometimes more expensive, groceries. The Mangilao Pay-Less Supermarket is a 5-10 min drive from central Yona. Micronesia Mall and the Tumon shopping district can be a 15-30 minute drive depending on traffic and the time of day, and it can take nearly 45 minutes to drive to Andersen Air Force Base and 30-40 minutes to the Navy Base. 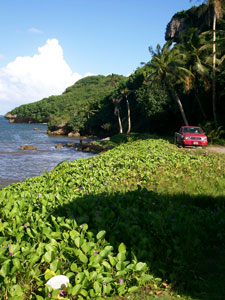 Talofofo is the second southern village on the eastern side of Guam. This sleepy village is known for its majestic waterfalls, ancient caves, secluded beaches, and Jeff’s Pirate Cove, one of the few traditional-style bar and grill on the southern end of the island.

There is also a souvenir shop and a museum that details the activity in the area during both World Wars. Tourists and locals also enjoy the quiet and serene Onward Talofofo Golf Course.

Talofofo is predominantly residential, making it the perfect location for those who want to be away from the hustle and bustle of the larger villages. There is an elementary school as well as a high school located in Talofofo, along with a sports field and a gym.