Under the sea: Sea stars, urchins off Guam's shores

Under the sea: Sea stars, urchins off Guam's shores

Echinoderms are members of a phylum (i.e., a major group) of common, often large and colorful shallow-water invertebrates seen on the reefs around Guam. The phylum is comprised of five classes: sea stars, sea urchins, sea cucumbers, brittle stars and sea lilies. The first three classes need little introduction and have been recognized since ancient times. 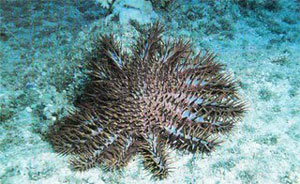 Brittle stars resemble starfish, but their arms are thin and can writhe independently. Deepwater sea lilies resemble their namesake, stalked with their petal-like arms spread into the current. The shallow-water cousins of the sea lilies are stalkless, and often go by the name of feather stars and may be seen by divers at night perched atop coral heads.  These five classes are united under the phylum Echinodermata (from the Greek for “spiny-skinned ones”) by the presence of hydraulically powered tube-feet, an internal skeleton of crystalline chalk, and the unique ability to change their skin from leather hard to gelatinous ooze at will.

Throughout Micronesia, sea urchins are collected and their gonads eaten. Their skeletons, called tests, are known from the refuse middens of prehistoric Chamorros, suggesting that the animals were also eaten in the Marianas. Sea cucumbers are also eaten on other Micronesian islands today, but there is no evidence of these animals from archaeological deposits, though it is doubtful that anyone has thought to look.

The other three classes of echinoderms have too little flesh to be eaten. Chamorro call the sea stars and brittle stars puti’on tåsi, which means “star of the sea.” Sea urchins go by lå’on, while sea cucumbers are called balåti. Neither of these terms are translatable. No Chamorro names for sea lilies or feather stars has been identified, perhaps because in Guam waters, the animals are uncommon, nocturnal and restricted to deeper reef slopes. 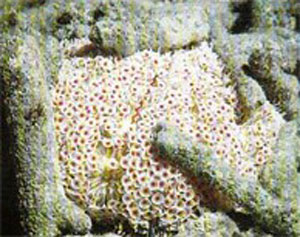 Economically, sea cucumbers are the most important echinoderms. They are a gourmet food item in northern Asia and several commercially valuable species were exported from Guam by the Chinese during the Spanish and American administrations of the island in the 19th and early 20th centuries. A red secretion from the skin of a common black species Holothuria atra is still used on Guam to evict octopus from their holes. Another species, Bohadschia argus, releases sticky, white collagen tubules (“bubblegum balåti”) when disturbed that are placed over coral cuts to stem bleeding.

There are more than 200 species of echinoderms known to inhabit the shallow waters around Guam. There are about thirty-six species of sea stars, fifty-three sea urchins, forty-seven sea cucumbers, forty-seven brittle stars and twenty-one sea lilies.  While echinoderms are relatively well known for invertebrates, new species, even large, plentiful ones, are constantly being discovered on coral reefs, including those around Guam.

Currently, there are at least a dozen species that have been found recently around Guam that cannot be identified to species and may be new to science 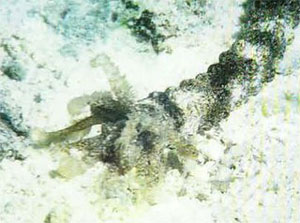 While new species of echinoderms have been discovered around Guam, very few, if any, are likely to be restricted to the island or the Mariana Archipelago, as nearly all species have potentially widely dispersed eggs and larvae. The most common family of tropical sea stars, the Ophidiasteridae, have fifteen representatives on Guam, including the distinctive large, blue Linckia laevigata, often seen while wading. 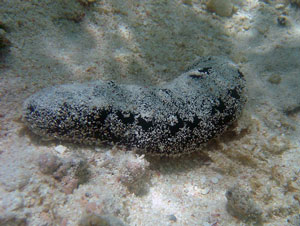 Most animals inhabiting tropical oceanic islands are broadcast spawners. These species, including most echinoderms on Guam, spawn annually or biannually en masse at night. Eggs and sperm are released into the water, where the eggs are fertilized. The larvae will stay in the water column, drifting amongst the other plankton, feeding and growing, until metamorphosis into a miniature adult form and settlement onto the reef. Each class of echinoderm has a distinctive larval form. Developmental times may be longer than a month among broadcast spawning species or as short as a few days for those, like the sea lilies, that have forsaken a feeding Odyssean larvae. 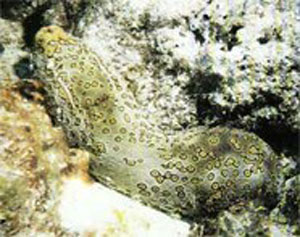 Guam echinoderms have distinctive distributions around the island. Some species are restricted to the shallow reef flats, where they may be particularly abundant. These species must be able to tolerate the harsh conditions there, where water temperatures may reach over 40 C (120 F) during spring low tides or where salinity may drop to only twenty-five percent of that of ambient seawater because of rain runoff.

Other species, such as many of the sea lilies, are restricted to the deeper forereef slope and may only be seen at night with the aid of SCUBA.  Occasional large waves from severe storms and typhoons may also account for the fewer large echinoderms seen on shallow, east-facing windward shores.

Five steps to diving on Guam

Budget tricks for your next trip

Time to vote for the Best of the Pacific 2019