by Guam Visitors Bureau
Stripes Guam
Email
Print
Reddit
Tweet
Share
Pinterest
More
Long renowned as the perfect tropical paradise destination, visitors choose Guam for its white sand beaches and turquoise waters year after year. But did you know Guam also offers much of interest to lovers of nature and wildlife? Home to several species that are found nowhere else, these species are endemic to Guam.
Guam Rail aka Ko’ko’ Bird
The Guam Rail has a brown head with a grey eye stripe and throat and a dark blackish breast with white barring. The Guam rail is a secretive, flightless, territorial species that is easy prey for monitor lizards, cats, rats, and the brown tree snake. The ko’ko’ bird has been on the endangered species list since 1984 and breeding programs have been set up to reintroduce the treasured bird to Guam’s forests. In November 2010, 16 ko’ko’ birds were released on Cocos Island, one mile off the southern coast of Guam.
Mariana Fruit Bat aka Fanihi
Once found throughout Guam and the CNMI, Mariana fruit bat populations have declined over the years. In northern Guam, bats primarily forage and roost in native limestone forest. In southern Guam, a few fruit bats may still inhabit ravine forests. Fruit bats sleep during much of the day, but also perform other activities such as grooming, breeding, scent rubbing, marking, flying, climbing to other roost spots, and defending roosting territories. Bats gradually depart colonies for several hours around sunset to forage.

Mariana Eight Spot Butterfly aka Ababang
Ababang, also known as the Mariana eight spot butterfly, is endemic to Guam and has only been recorded on the islands of Guam and Saipan. The larvae of this rare and protected species feed on only two known host plants: Elatostema calcareum and Procris pedunculata. Because of its rarity and limited distribution, this subspecies became listed as endangered in 2015.
Micronesian Kingfisher aka Sihek
Although the Micronesian kingfisher is endemic to Guam, because of the brown tree snake the species became dangerously close to becoming extinct and now exists only in small populations in protective facilities in Guam and in the U.S. mainland. Efforts to reestablish a wild population are underway. The kingfisher has a loud, raspy, distinct call that is regularly heard at first light of dawn, though the birds will sometimes call at night. Calls are voiced with such regularity that, according to local belief, they can be used to tell time.
Mariana Crow aka Aga
A large bird for Micronesia (fifteen inches or 38 centimeters), it is small for a crow. Also known as the Aga in Chamorro, the Mariana crow is mostly black with a glossy green sheen on the head and bluish black on the back, wing and tail. Endemic to Guam and Rota in the Northern Marianas, the Mariana Crow is only found on these two islands. It, too, is on the endangered list as a result of the brown tree snake.

Explore the Guam National Wildlife Refuge at Ritidian
One of the best places to learn more about Guam’s wildlife is the Guam National Wildlife Refuge Ritidian Unit. The forest surrounding at the refuge is home to many different plants and trees, some of which produce beautiful flowers and fruits. These forests in turn support a diverse array of wildlife, such as birds, insects, lizards and crabs, among many others. The refuge also hosts a very large population of native butterflies; abundant among them are the blue-banded king crow butterfly, which can be found in great numbers throughout the forest and along the beach. Visitors will also find geckos, skinks and crabs in abundance throughout the refuge, as well as marine life, from the fossils within the cliff walls to the beautiful coral reefs that make up more than two thirds of the total refuge area. 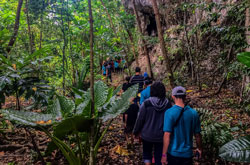 At the Guam National Wildlife Refuge Ritidian Unit visitors can explore roughly two miles worth of trails, visit latte stone and other cultural sites, relax on a beautiful white-sand beach, or schedule a tour of the newly rediscovered ancient village or of the numerous caves found along the majestic limestone cliff line. Visitors can also experience what Guam may have looked and sounded like 500 years ago, by visiting the Nature Center, where four 16-foot murals depict Guam's natural environment before European contact.
Guam National Wildlife Refuge Ritidian Unit welcomes the public free of charge. It is open daily from 7:30am to 4:00pm and is closed on all major federal holidays. More information can be found online at www.fws.gov/refuge/Guam/

2019 July happenings at the Guam museum

My Paradise: Dive into a great trip to Batangas, Philippines