"Romeo and Juliet” is not the only romantic saga ending in woe. Others in Japan and on Guam are inked so indelibly on public psyches as to inspire “lovers’ points” with sweeping vistas to evoke romance and luck in love. In fact, cities have even become bedfellows because of their respective tales of trysts and tragedies. 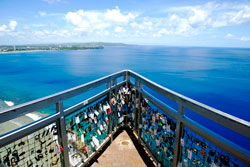 Guam’s Puntan Dos Amantes, or Two Lovers’ Point, overlooking picturesque Tumon Bay and the Philippine Sea, has two “sister capes” in the Land of the Rising Sun. There is Izu City’s Toi Koibito Misaki, or Lovers’ Point, with its panoramic vista of Mount Fuji and the Suruga Gulf in Shizuoka Prefecture, and Kashiwazaki City’s Lovers’ Point in Niigata Prefecture, offering scenic sunsets over the Sea of Japan against the backdrop of nearby Sado Island. The transpacific courting began more than two decades ago.

Present day Izu City has the longest running courtship with Guam. In 1989, then Guam Gov. Joseph Ada and the town mayor of Toi (now part of Izu), Takashi Aoki, signed a “sister cape” deal during a ceremony on the island. In 2003, then Gov. Felix Camacho and Kashiwazaki Mayor Shingo Tsuchida followed suit.

“Since there is a lovers’ point in our town, I thought it would be nice to build a friendly relationship with Two Lovers’ Point on Guam to promote tourism,” said Kazuhiko Kagiyama. The former Toi Tourist Association director spearheaded the 1989 project by reaching out to the Guam Visitors Bureau.

All three amorous attractions are wed to romantic sagas of yesteryear – two with tragic endings of Shakespearian proportions. Today, they are go-to destinations for a date day, if not to supercharge that special bond with a certain someone. 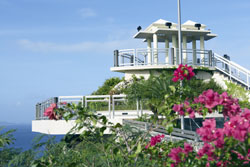 The saga behind Izu’s Lovers’ Point has the more upbeat ending: Prevented by circumstance from marrying, two youths express their love for one another over a great distance by ringing a bell miraculously given to each of them. In time, their famed plight prompts others to bring them together so they can wed. Today, pilgrims flock there to ring a gold bell in hopes of gaining love.

Guam’s Two Lovers’ Point is said to be where a local Chamorro man and Spanish maiden leapt to their deaths in the 1500s to avoid capture and the girl’s forced betrothal to another, thereby preserving their love eternally.

Today, this scenic symbol of undying love is touted as the ideal place for weddings as well as views. There’s also a silver bell – a gift from its sister cape in Izu – said to bring luck in romance to those who ring it. Visitors can also buy heart-shaped locks and plaques to write down heartfelt wishes for romance and attach them to the Love Lock Wall to come true – a custom adopted from the cape’s Kashiwazaki sister.

In Kashiwazaki, Lovers’ Point is tied to the tale of a love-sick woman who drowned on one of her nightly perilous journeys from Sado Island to meet her lover in the city. He in turn took his own life. Now, those in search of successful marriage make pilgrimages there to enshrine their written wishes along the cape’s fence.

Tourism officials say the sister-cape relations have been a boon.

“Quite a few Japanese who visited Puntan Dos Amantes learned that it has a sister cape here in (Izu) then came to see our cape,” Kagiyama said. “I also hear a lot of lovers who come here say they are planning to visit the Two Lovers’ Point on Guam. …  This is a win-win situation.” 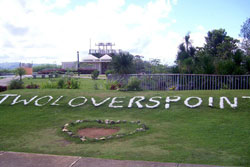 Built upon a bittersweet tale of eternal love, Puntan Dos Amantes, or Two Lovers Point, is an icon of Guam attractions. Every year hundreds of thousands of visitors are drawn to the towering cliff that is the site of Guam’s most well-known and romantic legends.

The Two Lovers Point park features lookout points that offer sweeping views of Tumon Bay, high above crashing ocean waves 122m (400ft) below. Couples can purchase a lovelock, attach it to the railing and toss the key into the ocean to symbolize their own eternal love. The centerpiece of the park is a magnificent brass statue of two lovers locked in an embrace that gleams in the sun and extends to the sky. The park also features a wedding chapel and terrace restaurant. 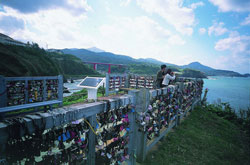 Named after a sad love story, or “sado jowa,” this Lovers’ Point is in Sado Yahiko Yoneyama National Park and is famed for being Niigata Prefecture’s most popular spot for viewing beautiful sunsets. It overlooks the Sea of Japan, offering picturesque vistas of 3,255-foot-tall Mount Yomeyama, nearby Sado Island and the Fukuura Beach coastline. Lovers come here and purchase a chain, lock and heart-shaped plaque from the visitors’ shop. After writing their romantic wishes on the plaque, they chain it to the fence surrounding the scenic cape, securing their love. It’s said that doing so ensures successful marriage. 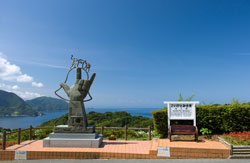 About 230,000 people, many in search of luck in love, visit this cape annually. An observation platform offers fantastic vistas of Mount Fuji Suruga Gulf. A golden bell is mounted there and it is said that whoever rings it three times their wish in matters of love will come. The bell has a silver ‘sister’ on Guam’s Two Lovers’ Point. According to lore, whoever can ring both bells will be grated both happiness and prosperity. Lovers who ring the bell together can get a special certificate of declaring their amorous relationship at the visitor’s office on site. When they marry later, a congratulatory message will be sent to the newlyweds.

The town of Toi, in the city of Izu, also boasts other attractions such as scenic Anrakuji Temple and the world’s largest flower clock in Matsubara Park and the oldest hot spring in western Izu.

Matters of the heart mythology

Guam’s legend may be compared to “Romeo and Juliet,” while the lovers’ points legends in Japan can be characterized as typical Japanese folk stories. Yet there is a poignant similarity at the heart of all three of these tales. Compare them yourself. You’ll see just how beautiful – and cruel – love can be.

The sad love story of Kashiwazaki

Oben, the daughter of shipping agent Ogi, Sado Island, met and fell in love with Tokichi, a boat carpenter who came from Kashiwazaki, a village on the shore of Niigata, about 35 miles away. They enjoyed romantic rendezvous while Tokichi worked on the island. On completing his work, however, Tokichi had to return to Kashiwazaki.

Oben could not forget her lover. One night, she missed him so much that she took a small round “taraibune” boat and sailed the sea late at night to Kashiwazaki guided by a light on the cape. When she reached Kashiwazaki she was reunited with Tokichi again. She began doing this every night.

Although Tokichi welcomed her at first, he was eventually put off by an attachment so strong that it made Oben sail 35 miles to Kashiwazaki every night. One night, he extinguished the light on Kashiwazaki’s cape when Oben was at sea. She got lost and her boat eventually sank offshore. Seeing her body on Kashiwazaki’s beach the following morning, Tokichi was filled with deep regret and despair over his actions. He took his own life by jumping off the cape into the sea.

The legend of Two Lovers’ Point

Once long ago, in the time when Spain ruled Guam, there was a proud family living in Hagatna, the capital city.  The father was a wealthy Spanish aristocrat and the mother was the daughter of a great Chamorro chief. The family owned land and were highly esteemed by all, Chamorro and Spanish alike.

Their daughter was a beautiful girl, admired by all for her honesty, modesty, and perfectly natural charm.  Her beauty bestowed the greatest pride and dignity unto her family.

One day, the girl’s father arranged for her to take a powerful Spanish captain as her husband.  When the girl discovered this, she was so distraught that she ran from Hagatna all the way to the north of Guam until she found a secluded and peaceful shore.

There, on the moonlit shore, she met and fell in love with a young warrior from a very modest Chamorro family.  He was gentle, with a strong build, and had eyes that search for meaning in the stars.

When the girl’s father learned of the two lovers, he grew angry and demanded that she marry the Spanish captain at once.  That day at sundown, she stole away to the same high point along the shore, and once again met her Chamorro lover.

Her father, the captain, and all the Spanish soldiers pursued the lovers up to the high cliff above Tumon Bay.  The lovers found themselves trapped between the edge of the cliff and the approaching soldiers.

All the young warrior could do was warn them to stay back, and the father ordered the soldiers to halt.

The lovers tied their long black hair into a single knot.  And acting as if they were entirely alone, they looked deeply into each other’s eyes and kissed for the final time.  Then they leaped over the long, deep cliff into the roaring waters below.

Her father and all who remained rushed to the edge to stare in great anguish.

Since that day, Chamorros have looked to the jutting peak above Tumon Bay with reverence.  The two lovers remain a symbol of true love--a love in which two souls are entwined forever in life and in death.  Forever after, the high point on the cliff was known as Two Lovers Point.

Once upon a time, a fisherman named Fukutaro from Toi met Oyone, a farming girl from Yonezaki at his village’s morning market, and they fell in love. Although they wished to be together, the steep mountains between their villages, their poverty and need to care for their aging parents prevented them from seeing each other.

Oyone, thinking of Fukutaro, visited a shrine daily to pray they would be united. Even if there was a violent storm she always visited the shrine to pray. One day, while she was praying she heard a voice say, “Oyone, I’ll give you two bells. Give one to Fukutaro and confirm his love with them.” She looked down and there were two bells.

When she took the bells to Fukutaro, they both welcomed the miracle. He hung one bell on the bow of his fishing boat. Fukutaro always sailed passed Oyone’s village on the way of his fishing grounds.

Every morning, Oyone climbed a cape rang her bell three times when Fukutaro’s boat passed by. When Fukutaro heard the bell, he responded by ringing his bell on the boat. Although the lovers could not see each other, they confirmed their mutual love with the bells. Sometimes, Oyone’s bell guided Fukutaro’s boat home when he was lost in heavy fog or stormy weather.

The sound of the two lovers’ bells gradually became renowned throughout Yonezaki village, and the villagers found a way for two to unite. They lived happily after.

Take an eco-tour in Suncheon city!

5 free (and fun) things to do on Guam