Walk back in time in Hagatna, Guam

Walk back in time in Hagatna, Guam

In Guam’s capital city of Hagåtña sightseers can take a memorable walk through Guam’s history. The Heritage Walking Trail, developed by the Hagåtña Foundation in partnership with the Government of Guam and the US Department of Interior, connects a pathway through seventeen historical sites and brings to life the resilient and vibrant history of the Chamorro people. 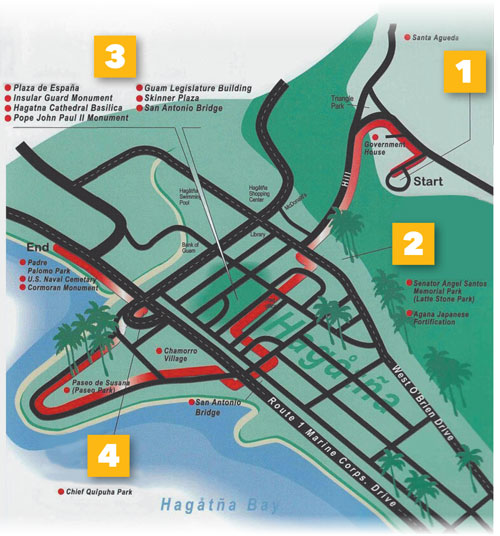 From the scenic cliff line view at the Spanish Fort Santa Agueda, visitors can gaze down below to Hagåtña and see the entire length of the Heritage Walking Trail that covers a distance of 1.6 miles. With the first steps through Guam’s Spanish period (1668-1898) at the Fort, which was built in 1800, visitors can walk past Government House and into the Latte Period (900 AD to 1700 AD) at the Angel Santos Memorial Park.  Here, visitors will find eight latte stones used as strong foundations by the ancient Chamorros to support their wood and thatch homes.  Nearby, under the cool shade of the Monkey Pod trees, visitors will see the Japanese fortifications built into the Hagåtña cliff line by the hands of Chamorros, who were forced into hard labor during the Japanese Occupation of World War II (1941-1944).

As visitors walk along the trail they will enter the spacious grounds of the Plaza de España.

The Plåza once housed the Spanish Palace and served as the center of the Spanish government in the oldest colonized city in the Pacific region: Hagåtña.  The majestic limestone arches and columns are remnants of the framed entrance way to the old Spanish Almacen that stored munitions for Spanish soldiers.  From there, trekkers can go into the Chocolate House, where previous governors and their families enjoyed their “meriendas,” drank chocolate and savored their morning and afternoon meals.  Visitors can then take the stairway that leads to the Azotea, where the privileged families of the past and their honored guests relaxed in conversation and enjoyed the fresh open air.  The Kiosko, located at the center of the Plaza, is a pleasant spot where visitors can rest or marvel at the burst of color from the aptly named flame trees.  Visitors may want to close their eyes and listen very carefully to hear the music of the US Naval Bands that performed during the Naval Government Administration (1898-1941).  At the edge of the Plaza grounds is the prominent Insular Guard Monument that was built to honor the brave Chamorro men who defended the Plaza during the Japanese invasion of Guam. 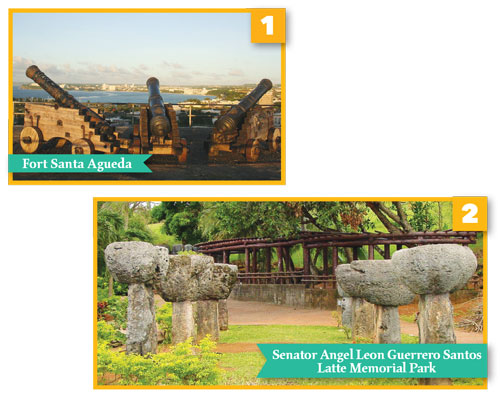 Past the vivid orange colors of the flame trees is the Dulce Nombre de Maria Cathedral-Basilica, the site of the very first Roman Catholic Mission that was established in 1669.  Visitors may peer into the doors of the Cathedral to see a beautiful statue of the Patron Saint of the Marianas, Santa Marian Kamalen.  Legend has it that island fishermen from the southern coastal village of Malesso’ recovered the statue as it was held above the water on the backs of crabs with brightly lit candles.

In the middle of the main street known as Chalan Santo Papa, the statue of Pope John Paul II stands, built on the very spot where he celebrated Mass with thousands of devoted Catholics during his visit to Guam in 1981.  Crossing the street from the Plaza de España, walkers will enter Skinner Plaza (which is currently closed due to construction until Dec. 28), named after Governor Carlton F. Skinner, the first civilian Governor of Guam.  Skinner was appointed by President Harry S Truman in 1949.  Here, visitors will find a number of significant monuments within the Plaza dedicated to the valiant sacrifices and patriotic spirit of Veterans from World War II, the Korean War, and the Vietnam War.

Continuing along the historic trail visitors will see the arched top of the San Antonio Bridge.  The stone bridge, known as Tollai Acho’, was built in the 1800s and spanned above the prewar Agana River.  The bridge connected the Hagåtña barrios or neighborhoods of Bilibik and San Ignacio.  The river that used to flow freely below was rerouted with the reconstruction of Hagåtña after World War II.

From the San Antonio Bridge and across Marine Corps Drive, the modern day Chamorro Village (or i Sensong Chamorro) can be seen.  Chamorro village houses quaint little shops with handicrafts, tasty food and a festive atmosphere.  Visitors can have a cool drink and savor local cuisine, or they can move toward the Agana Boat Basin and view the marina and the channel leading boats to and from the docks.  Located on the shore is a Japanese Pillbox that served as a coastal defense fortification during the Japanese Occupation.  A stroll around the Paseo De Susanna, built from the rubble of World War II, and the Paseo baseball stadium, leads to a piece of Guam’s American heritage–a replica of the Statue of Liberty that was donated to the people of Guam in 1950 by the Boy Scouts of America. The statue looks out to the west toward the Philippine Sea.

By walking along the shoreline, the trail will eventually take visitors to the prominent statue of Chamorro Chief Maga’låhi Kepuha, adorned with his shell sinahi.  Kepuha was a leader from Hagåtña, who in 1668, gave Jesuit priest Father Diego Luis de San Vitores permission to build the first Roman Catholic Mission.  He was also the first Chamorro noble to be baptized into the Catholic faith.  Continuing along the shoreline, visitors will cross the rerouted Agana River, and walk up to Padre Palomo Park, named in honor of Father Jose Palomo, the first ordained Catholic priest of Chamorro ancestry. 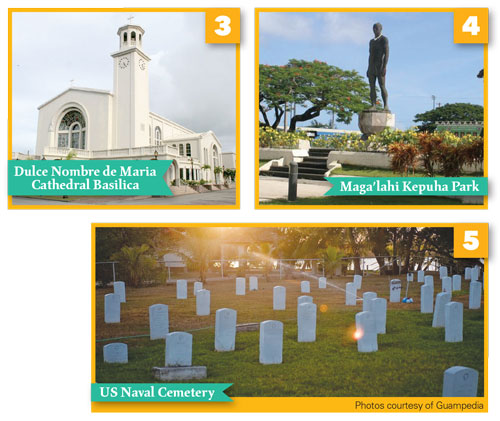 Also located in the park site in the early 1900s was the Padre Palomo School. As visitors get closer to the end of the historical trail they will enter the gates of the old US Naval Cemetery. In addition to the graves of Navy servicemen, the cemetery also contains a monument and the buried remains of thirteen German sailors who died tragically when their coal burning ship, the Cormoran, was scuttled off the west coast of Guam in 1917 by its German captain and crew.  This was done to prevent the ship from being taken over by the Americans during World War I.  It is here that the historical walk trail ends and your memories of Hagåtña’s rich history begins.

Get to know Guam: Hagåtña timeless as blood itself