Your guide to the Guam Museum permanent exhibit

Your guide to the Guam Museum permanent exhibit

Take a walk through Guam history by visiting the brand new permanent exhibit at the Senator Antonio M. Palomo Guam Museum and Chamorro Educational Facility in Hagåtña. This 6,200 square foot (576m²) gallery, located on the second floor of the Guam Museum, is the first of its kind on the island, featuring interactive, state-of-the-art technology and the most complete display of Guam’s history and culture in the Chamorro language to date.

The exhibit is designed to educate and entertain audiences of varying ages, backgrounds, and languages. Over 300 curated artifacts, thousands of images, multiple audios, and short films have been carefully pieced together in seven different galleries to guide visitors through the historical, Chamorro narrative of Guam. Descriptive panels are written in English and Chamorro and are accompanied by QR codes that translate the text into Japanese, Mandarin Chinese, and Korean. 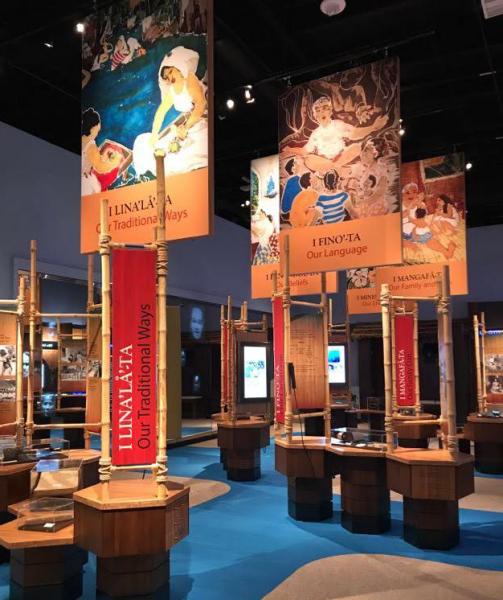 In Galleries 1, 2 and 3, the journey through time begins in the Queuing Room. Beyond the floor-to-ceiling mural of “Fo’na Creating the People of Guam”, is a gallery filled with local artwork, in various mediums, depicting notable eras from Guam’s history, culture, and society. A video of Governor Eddie Calvo greets visitors as they make their way through the artwork toward the Orientation Theater. The short film shown in the mini theater transports you instantly into ancient Chamorro past, beginning with an animated creation story of Guam, and then transitions to live action, to show how the seafaring Chamorros came to settle on the island.

Once the film ends, the doors to the second gallery open into an immersive exhibit of Guam’s ecosystem and how the earliest settlers interacted with it over time. Some of Guam’s oldest artifacts, including slingstones, pottery sherds, and pounding stones are displayed. Gallery two transitions seamlessly into gallery three, which introduces the ancient Chamorro way of life with reproductions of the sakman (seafaring outrigger canoe), guma higai (pole-and-thatch hut) and guma latte (latte house). 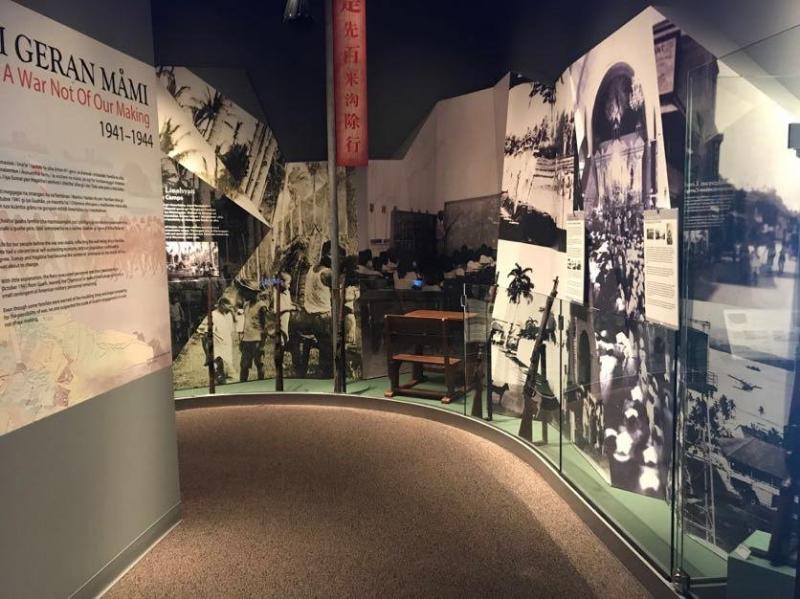 In Galleries 4 through 7, Chamorro life on Guam takes its most striking turn with the arrival of the Spanish and then the Americans in the fourth gallery. Flashing timelines, an animated short film, paintings, artifacts, touch screens, and corresponding audio fill the space, detailing the start of modernism and Western influence on Chamorro culture and society. Gallery five introduces the devastation of World War II with artifacts, pictures, sets and sound effects, starting with the Japanese Occupation and finishing with the American Liberation of the island. In gallery six, sound booths with the voices of war survivors tell personal and unforgettable stories of the Occupation and Liberation.

This is also where a display of the effects of Sgt. Shoichi Yokoi, a Japanese soldier who hid in the jungle for 28 years after the war, can be viewed. Beginning in the sixth and ending in the seventh galleries, comes the commentary, artifacts, and census stations of postwar Guam’s economic, political and architectural reconstruction and population transition. Finally, a large, interactive touch screen with more information about Guam, and a changing gallery of locally-crafted 2D and 3D artwork conclude the exhibit.

The Guam Museum is open daily from 10 a.m. to 4 p.m., and general admission to the museum is $20. For more information, visit guammuseum.org.